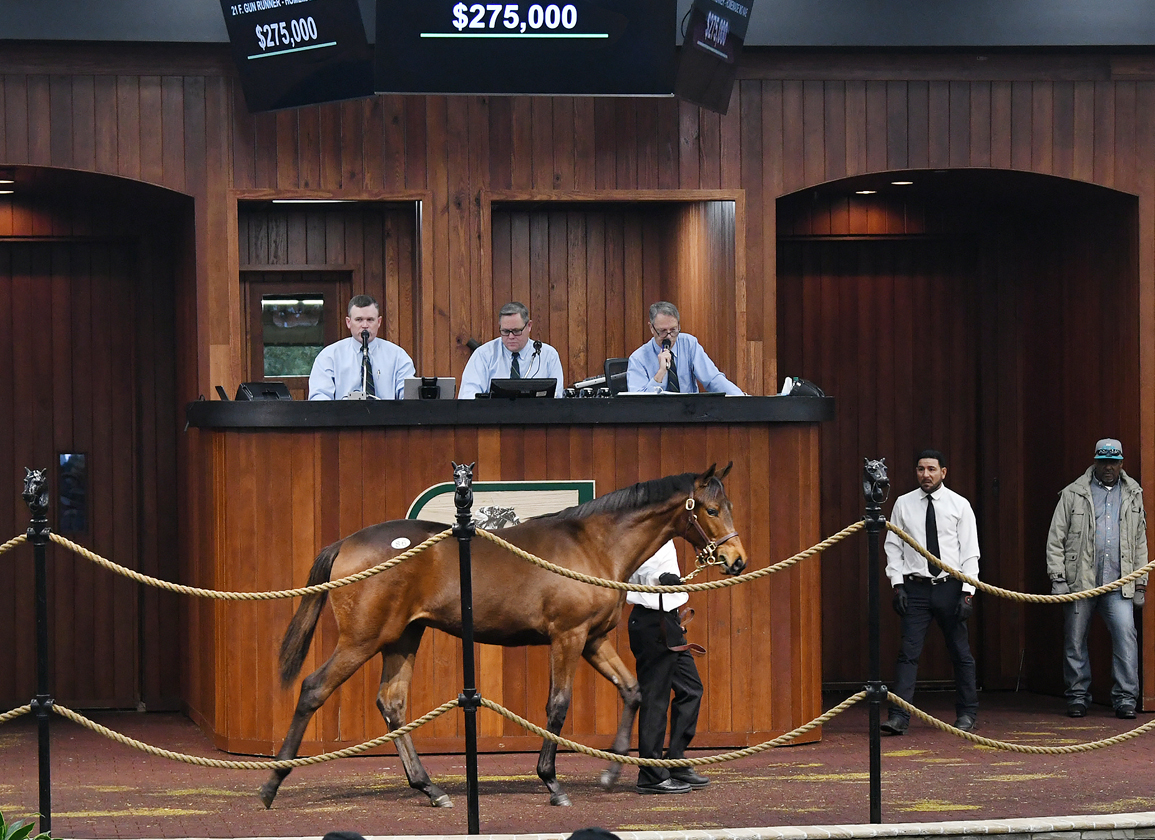 A short yearling filly by Gun Runner topped a day of lively trade during the consignor preferred session of the Ocala Breeders' Sales Company's Winter Mixed Sale Tuesday in Central Florida when bringing a final bid of $275,000 from Mike Hall of Breeze Easy, LLC. The Florida-bred youngster was one of six yearlings to bring six figures during the session.

The session topper (hip 86) was consigned by Get Away Farm and was bred by that farm's owners Carol Reitman and husband Warren Miller, in partnership with Susan Gannon.

Reitman and Miller purchased Get Away Farm in Lowell, Florida from Manny Andrade in September of 2020 and acquired the unraced mare Homemade Mo Nae (Uncle Mo), carrying the session topper, from him two months later for $92,000 at the Keeneland November Breeding Stock Sale.

“Manny Andrade owned the family,” Miller explained. “He had nurtured the family and bred it along. The broodmare, Homemade Mo Nae, was destined to go up to the [Fasig-Tipton] Saratoga Select sale. She was a gorgeous-looking filly and they were expecting half-a-million dollars. But she was injured and she was scratched. Manny was very disappointed. He said she was the nicest one he'd ever bred.”

Miller continued, “I knew he had held on to a few of the ones that he thought were better mares at the end and sent them up to Keeneland. His farm manager, Larry Anderson, who still works with us, he told us that everything that family had thrown was very correct and the Uncle Mo mare was a gorgeous mare. So he thought it would just carry on and certainly it did. We took his advice and bid on her. We bought her in foal to Gun Runner and then he got hot. That's basically the whole thing.”

Miller quickly reinvested the day's profits, topping the auction's horses of racing age session when going to $145,000 to acquire Freedom Speaks (American Freedom) (hip 253). The unraced 3-year-old filly is out of Wicked Speed (Macho Uno), a half-sister to Canadian champion Fatal Bullet (Red Bullet). The gray filly worked three furlongs in :31 2/5 during Monday's under-tack preview. Purchased for $37,000 at the 2020 Fasig-Tipton October Yearling Sale, she was consigned Tuesday by Thomas and Lori Fackler's Best A Luck Farm.

“We will see if she can run,” Miller said. “She breezed good on this Poly and hopefully, with the Poly down there [at Gulfstream Park], she'll recoup some of her purchase price and maybe place in a good race and have a future as a broodmare as well.”

Miller and Reitman have a broodmare band of about 12 mares at Get Away Farm and plan mostly to race their foals. Among the homebreds to carry the silks of Reitman Stables is stakes winner Crown and Sugar (Crown of Thorns).

“We are getting up there and I like to race when I can,” Miller said of the sale of the yearling and purchase of the 3-year-old. “It's a longer wait [with the yearling] and we've been doing this a while, time is marching on. We are a smaller farm and we just look to keep plugging along and play around.”

Miller credits teamwork for success in the sales ring and on the track.

“I was in the buggy business–the harness business for years–and we came together and put it together as a team,” he said. “We have a great farm manager in Larry. He's been at Get Away Farm for 35 years. It used to be run by the Mills family, Randy Mills. And then Manny Andrade bought it. He stood Two Step Salsa and Drill. We bought it from him and we chose to carry on in an easy fashion. We still foal out about 50 mares there for some people locally. Susan is one of our consultants. We are all partners.”

Homemade Mo Nae, who is a half-sister to graded stakes winner Conquest Two Step (Two Step Salsa) and graded placed Sheikh of Sheikhs (Discreetly Mine), was not able to secure a return date to Gun Runner last year.

“We were disappointed they wouldn't accept her to breed back at Three Chimneys, but they are getting bombarded with horses,” Miller said. “The mare didn't catch back last year, but it's ok. She'll be ready to go as soon as the weather gets good up there in Kentucky.”

Until then, the team at Get Away Farm is enjoying Tuesday's success.

“We are a small outfit,” Miller said. “We do everything privately in our little group. So we are happy to just compete. For us, this was a home run.”