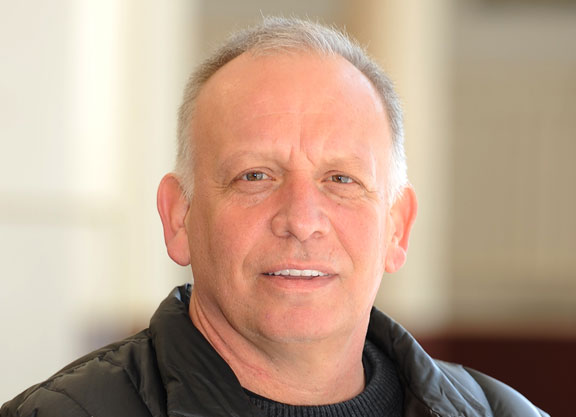 SARATOGA SPRINGS, NY–Horsemen and fans of New York racing are well familiar with the name Gary Gullo. The veteran trainer is consistently potent with claiming types and can get the right horse ready to win first out of the box. On the national scene, his name is much less recognizable, but that changed this year at Saratoga, when he had the distinction of being leading trainer after day one of the elite meet. He'll look to build on that honor when he starts two juvenile fillies in Sunday's GII Adirondack S. at the Spa, an opportunity he carved out by going back to what paid the bills when he first started training nearly 40 years ago.

“It was great, it really was, it makes things work out for the entire meet,” Gullo said of his opening day two-bagger, which included debutante Big Q (Big Brown), one half of his Adirondack pair. “After that, everything seems to run good. This is a tough place here, especially for me, not having those top horses like other guys got. So winning those two races was really good for the morale of the barn.”

Gullo started out at the racetrack as a 12-year-old, working before school for his father, blue-collar trainer Tom Gullo, who conditioned over 300 winners in his career. Gary went out on his own in 1980, and has built a steady presence on the ultra-competitive New York circuit through hard work and decades-long relationships with his owners.

In 1986, he took his first trip to the Ocala 2-year-old sales, where he began to bring back cheaper purchases who became success stories for the barn, allowing Gullo to establish his reputation as a capable horseman with a sharp eye for talent. Eventually, however, he phased out that part of his program when the juvenile auctions became more popular and attracted bigger and bigger buyers, most of whom were only interested in pure speed.

“It was different back then,” Gullo said of his early trips to Ocala. “They weren't really working them that fast and it was a different game. You could buy a nice horse for $20,000, but as time went on, people started looking more into the speed of the horses, how fast they galloped out, they had videos, so it became harder.”

Gullo gradually shifted his auction activity to yearlings, but didn't have the results he was looking for.

“We bought yearlings, but we really didn't do that well with the ones we were buying,” he said. “I'm not really good with them and not really qualified, to be honest, to buy yearlings. They just don't work out for me. There's too much going on, too much time, then you have to hope they don't get hurt, and it was a little frustrating. With 2-year-olds, I can buy them and bring them right to me, and they're more under my control.”

So, this spring, he went back to what he knew best and returned to Ocala for the OBS April Sale with a specific budget, determined to recreate the magic he experienced early in his career. He and loyal client Anthony Melfi, principal of Bob Petersons Stable, set a $100,000 budget per horse and made a plan to bring back four or five prospects. They bought four, for a combined $245,000, the most expensive of which was a flashy filly from the first crop of Bayern who hammered for $80,000 after breezing a furlong in :10 1/5.

Gullo retained a stake in the chestnut, named Miss Peppina, and Long Island and New Jersey car dealership owner Frank Bellavia, who's had horses with Gullo since 1984, bought in as well. She debuted going 5 1/2 furlongs July 3 at Belmont and, after, an alert break, got shuffled all the way back to eighth under Joel Rosario. That was no matter for the talented filly though, as she showed professionalism and a sharp turn of foot to rally to a two-length score going away.

“I thought she ran really good,” Gullo said. “She was way back there and got caught on the inside. What was nice about it was once she got going, he really didn't even hit her, he just tapped her on the shoulder and she took off. She went from eighth to second real quick.”

“She's got a great mind and nothing rattles her,” Gullo said. “She does everything right and is training great. I think the 6 1/2 is going to help her too. She's going to run the best that she can. Whether it's enough to beat those horses, I don't know, but she's going to do the best she can do so far.”

The other half of Gullo's uncoupled entry, Dutchess Views Farm's homebred Big Q, also rallied from well back to graduate first out. With the scarcity of allowance races available for juveniles, Gullo admits that her placement is a bit ambitious while hoping to get a black-type placing.

“I'm just taking a shot with Big Q,” he said. “I think the added distance is going to help her too, and if she could run third in there, that would be great.”

Regardless of what happens in the Adirondack, Gullo has made a splash this year by going back to his initial bread and butter. And while he doesn't expect to hang consistently with the top barns bankrolled by seemingly unlimited budgets, he knows that getting two horses to a graded stake at Saratoga is an accomplishment within itself.

“To me, $100,000 is a lot of money, but for the sales, that's the low end and it's tough to be competitive in New York with those horses,” he said. “You've got to look for horses that fall through the cracks a little bit. I've been doing it for a long time, and this year, I believe we've done well.”