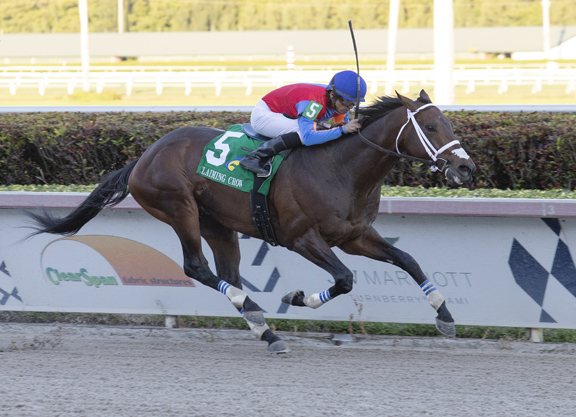 Marking the eighth consecutive year Gulfstream Park has hosted the Claiming Crown, Saturday once again featured an all-time handle record in the event with $13.846 million wagered on the program. The amount broke the previous record of $13.612 million, which was set last year. Handle for the Claiming Crown has climbed each of the last eight years at the Hallandale oval. Now having been contested 21 times total, Saturday’s event featured nine Claiming Crown races on the 11-race program.

“We’re ecstatic with the results from Saturday’s Claiming Crown,” said Gulfstream’s Vice President of Racing, Mike Lakow. “The Claiming Crown continues to grow at Gulfstream Park. We witnessed some special performances today from our horses and jockeys. We appreciate the support from the horsemen as well as our fans.”

The feature race on the card was the $200,000 Claiming Crown Jewel S., won by favored Leitone (Chi) (Dunkirk). The 5-year-old was formerly a dual Group 1 winner in his native Chile, but had no luck against stakes company stateside. Trainer Jason Servis claimed him for $12,500 six months ago at Belmont and he has since found the winner’s circle four times, including in Saturday’s Jewel. Servis also won the $125,000 Emerald S. with Muggsamatic (Any Given Saturday) and the $110,000 Canterbury with Shekky Shebaz (Cape Blanco).

Jockey Paco Lopez won four of Saturday’s Claiming Crown races, including the aforementioned Canterbury with Shekky Shebaz. Although not the richest race on the card, it featured the headlining horse with the 3-10 favorite getting a three-quarter length win over last year’s Canterbury winner, Rocket Heat (Latent Heat). Shekky Shebaz was coming off a third in last month’s GI Breeders’ Cup Turf Sprint but was eligible for the Canterbury by virtue of winning a $25,000 claimer at Saratoga July 27.

“We truly believe this is a special weekend at Gulfstream with the Claiming Crown and the Clasico Internacional del Caribe,” said Lakow. “We’re looking forward to another memorable day Sunday with the best Thoroughbreds from Latin America and the Caribbean. The energy in the building will be incredible once again.”

Sunday’s card at Gulfstream includes the Clasico Internacional del Caribe, which features five races written for horses from Latin America and the Caribbean.