Gulfstream Stakes Schedule Worth Over $29M 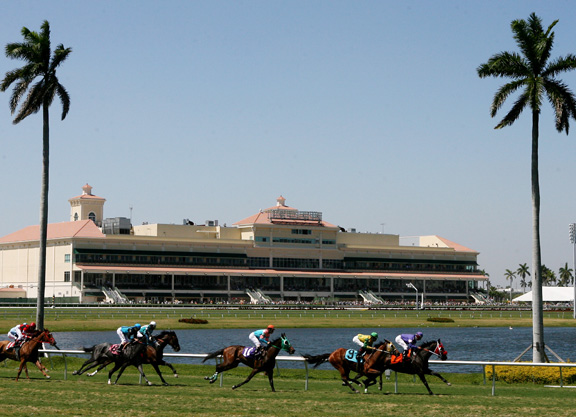 Outside the two multi-million dollar races, to be contested Jan. 26, the Gulfstream stakes program is anchored by the $1-million GI Florida Derby, the marquee event on a program that will feature seven additional black-type events, four of which are graded, Saturday, Mar. 30. Three of the six most recent winners of the Florida Derby have gone on to add the GI Kentucky Derby. The Florida Derby is the last of Gulfstream's four-race series for the sophomore set, which also includes the Jan. 5 Mucho Macho Man S., the GII Holy Bull S. Feb. 2 and the GII Fountain of Youth S. Mar. 2.

Sophomore fillies will also take their turn in the spotlight on Derby Day as they contest the GII Gulfstream Park Oaks, a key steppingstone to the GI Kentucky Oaks five weeks down the road. The 3-year-old filly series includes the Forward Gal S. and the GII Davona Dale S.

As it has the past several years, the $1.1-million Claiming Crown series will feature on opening day of the meet Dec. 1, while Gulfstream will also play host to the Clasico del Caribe Dec. 8 and the Eclipse Awards in January for the seventh consecutive year. The Sunshine Millions will be held Jan. 19.

The entire schedule may be viewed here.