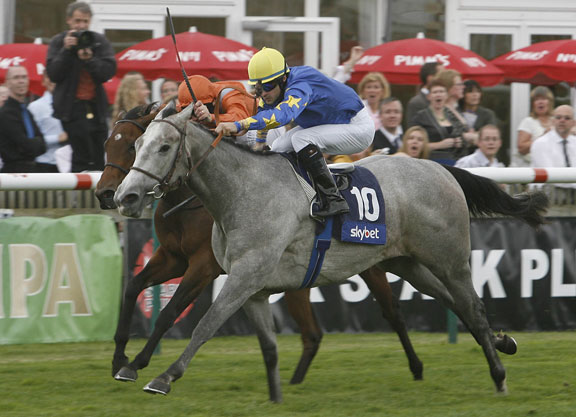 A €30,000 Arqana October yearling purchase by Patrick Barbe, Natagora was never worse than second in seven starts at two and posted five wins, including the G1 Cheveley Park S., G2 Prix Robert Papin and G3 Prix du Bois. She won the 1000 Guineas by a half-length under Christophe Lemaire and while she wouldn't visit the winner's enclosure again in six starts, she was third in the G1 Prix du Jockey Club and G1 Prix Jacques le Marois, and also picked up placings behind the brilliant older milers Goldikova (Ire) (Anabaa) and Paco Boy (Ire) (Desert Style {Ire}) in the G1 Prix Rothschild and the G1 Prix de la Foret. She was retired upon the conclusion of her 3-year-old campaign and sold privately to Shadwell.

Natagora produced nine live foals, headed by the listed-winning Mankib (GB) (Tamayuz {GB}) and the listed-placed Raaqy (Ire) (Dubawi {Ire}), and she is also the second dam of the G3 Sweet Solera S. winner Tajaanus (Ire) (Arcano {Ire}). She has an as-yet unraced 2-year-old colt by Invincible Spirit (Ire) named Haidarah (GB), a yearling filly by Frankel and a colt foal by Sea The Stars (Ire).