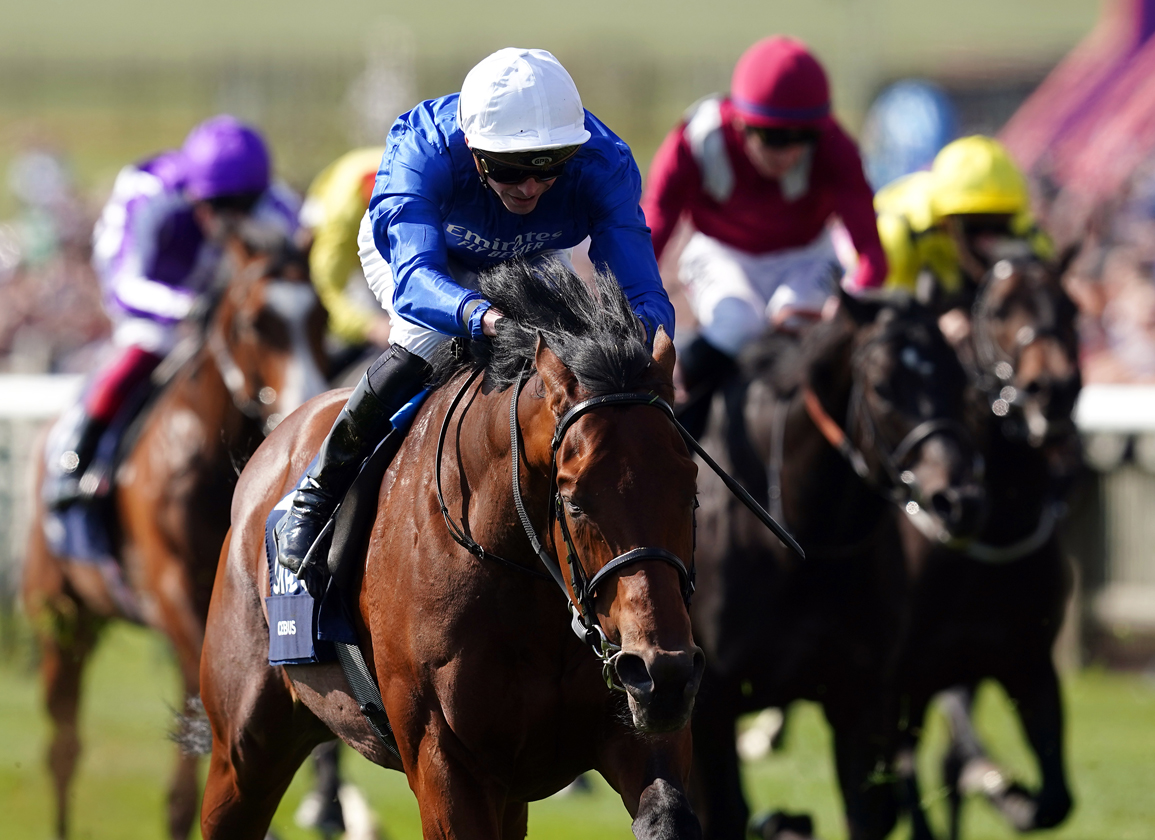 A Godolphin-Charlie Appleby one-two in Saturday's G1 QIPCO 2000 Guineas at Newmarket seemed highly plausible, but as the dust settled on the sun-blessed Rowley Mile it was Coroebus (Ire) (Dubawi {Ire}) and not Native Trail (GB) (Oasis Dream {GB}) who held the Moulton Paddocks bragging rights. Despite arriving here in his stablemate's shadow, the G3 Autumn S. winner received due respect and support at 5-1 attempting to navigate from the one draw on the far side. As the 5-4 favourite charged down the other wing with William Buick animated, Coroebus was just gliding under James Doyle and no sooner had he been delivered to lead approaching the furlong pole was the result settled. Hard as Native Trail tried to bridge the gap, it was 3/4 of a length at the line as Ballydoyle's Luxembourg (Ire) (Camelot {GB}) put up an ideal Derby trial, 1 1/2 lengths away in third. “At halfway, I thought 'this is all going pretty well' and I just had to keep patient,” the winning rider said. “It was no surprise to see William there at the finish–I had thought of saying to him going down 'I'll be seeing you at the other end' and that was how it happened. He travelled incredibly strong throughout and there's no reason he won't improve from today, as he was quite exuberant through the race.”

What had looked beforehand a vintage renewal may well turn out that way, with the only one of the “big four” out of the frame being the forwardly-ridden Point Lonsdale (Ire) (Australia {GB}) who had been interfered with by Native Trail as that rival veered right running down into the dip. Coroebus, who had so dramatically gone too early when worn down by Royal Patronage (Fr) (Wootton Bassett {GB}) in the G2 Royal Lodge S., was not for stopping this time as he showed all the benefit of a winter's strengthening. Still a physical specimen in need of time, the winner faced a deficit in terms of form figures entering this but put it all together to emerge best of a strong bunch.

As Coroebus remained trapped wide without cover for the early part of the contest, Native Trail had the same dilemma towards the stands but as expected their racing styles were in marked contrast throughout. There was no surprise to see Buick niggling some way out to engage his long-striding mount and, equally, nothing unusual in the manner Doyle was able to employ minimal encouragement to send the slick-travelling second-string forward heading to the downhill slope. Native Trail lost minor momentum there as he lugged into Point Lonsdale, but his finish was typically strong enough to win out had Coroebus fallen into a hole as he had in the Royal Lodge. Seven months on, the son of Dubawi was a more dynamic proposition at the death and that was the telling factor. Intriguingly, he becomes the latest superstar to emerge from the August Newmarket mile novice–formerly a maiden–won by Motivator (GB), Frankel (GB) and Roaring Lion.

“Ryan [Moore] joined me quite quick and so I just asked him a couple of questions going into the dip and he responded incredibly–I think had Ryan not forced my hand to go early I could have afforded to be even cheekier and he would have won even more impressively,” explained Doyle, the latest in a long line of riders to sport the old “lucky” white cap for the operation in a prestige event. “It is just amazing how hard it is to win this race. I've ridden some very good horses, including Kingman and Barney Roy–I hate to mention them, but they both fell short through no fault of their own and were victims of circumstance. It is testament to Charlie and the belief he has in us guys. For a jockey go out in a big race with a free rein to change things up is an incredible feeling.”

Interestingly, immediately after Coroebus's Autumn success on a Future Champions Day which belonged to the stable, Appleby had seemed to favour him over Native Trail. He said at the time, “It's a long way off, but I do like Coroebus. He's a supreme traveller and although you cannot fault what Native Trail has done, you've got to be able to travel in a Guineas and what Coroebus does have is a high cruising speed. You'll never take him off the bridle before the two-pole.” Reflecting on Saturday's performance, he said, “I could see James was travelling for fun and that's what this horse does–they can't go quick enough for him. He's a seven-furlong horse who could potentially get a bit further than a mile in time, I think.”

“I'd like to think I know the Dubawis by now,” Appleby added. “We've had enough of them through our hands and he's shown us all the right signs. This horse has always shown, like any good horse, natural pace and when they have that natural pace in the physique he has you can't do anything apart from get excited about it. He gained a lot of confidence in the Autumn Stakes and you have to just keep filling him up as he has an electric turn of foot. Dare I say it, he'll progress throughout the season and I think we'll potentially try to keep them apart.”

“It would be a shame for them to keep butting heads with one another and on the evidence of what we've seen today they are the best two 3-year-old colts around to date,” their trainer concluded. “We can probably say Native Trail will go to Ireland for the Irish 2000 Guineas where we have seen him be impressive before and Coroebus can go straight to the St James's Palace. Native Trail has gone down on his sword, but to be fair to him he's not actually built like a Newmarket runner and his class gets him through it. He's built to meet a nice rising track and Ascot would suit him perfectly. He's been beaten by an exceptional horse and is still a class animal.”

Already replete with Derby prospects, Aidan O'Brien can approach the Epsom Classic with even greater bullishness after Luxembourg put in a perfect preparatory effort. There were shades of Australia (GB), who also filled the third spot in 2014, in his performance as he stayed on to chase the pacier duo up ahead. “We knew he was a middle-distance horse and we were happy with where he was coming into this, so we were delighted with that run,” he said. “Everything went perfect over the winter and Ryan was delighted, he said he just stepped half a length slow out of the stalls and it just lost him a length or two but he was full of praise and Ryan did everything perfect. Point Lonsdale might not have been as forward as the other horse, so we hope there's going to be more to come from him. He's a horse that's going to be happy stepping up to a mile and a quarter and a mile and a half as well.”

Coroebus is the second foal out of the G3 Oh So Sharp S. scorer First Victory (Ire) (Teofilo {Ire}), who is one of five black-type winners out of the leading producer Eastern Joy (GB) (Dubai Destination). They include the four-times group 1 and grade I-winning Godolphin flagbearer Thunder Snow (Ire) (Helmet {Aus}), who was versatile enough to win a Dubai World Cup, the G2 May Hill S. winner and G1 1000 Guineas-placed Ihtimal (Ire) (Shamardal) and Always Smile (Ire) (Cape Cross {Ire}) who was runner-up in the G1 Sun Chariot S. and third in the G1 Falmouth S. The third dam is the G2 Sun Chariot S. winner Red Slippers (Nureyev), a full-sister to the G2 Jockey Club S. winner and G1 Epsom Derby-placed Romanov (Ire) and a half to the G1 Irish Derby and G1 Epsom Oaks heroine Balanchine (Storm Bird) who was responsible for the G1 Prix de Diane heroine West Wind (GB) (Machiavellian). Also connected to the G1 Irish Derby hero Sovereign (Ire) (Galileo {Ire}), First Victory's 2-year-old colt by Shamardal is named Pherenikos (Ire).