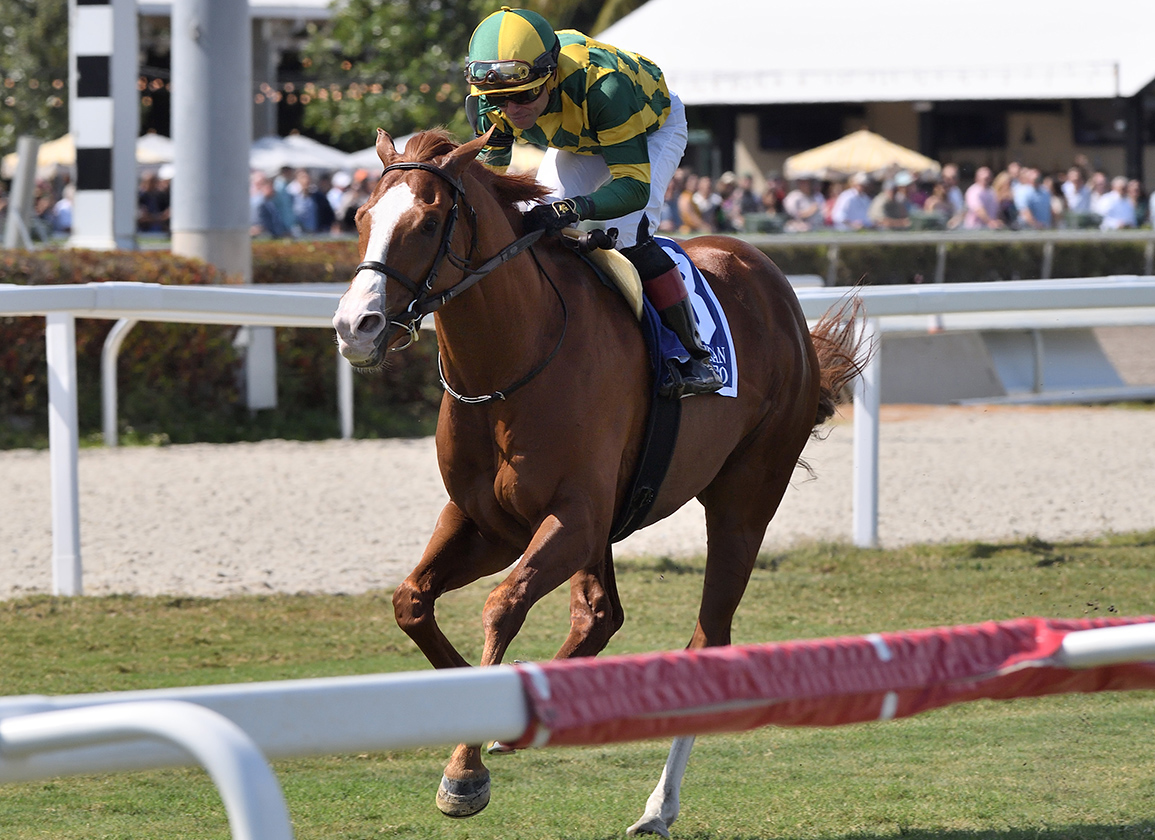 Though he was the clear class of the seven horses signed on for Saturday's GII Pan American S. at Gulfstream Park, Otter Bend Stables' Gufo (Declaration of War) had a November layoff and some off form at the tail end of last season to overcome. But in the end, there was very little to worry about, as the fans on hand for the Curlin Florida Derby were treated to perhaps the most polished performance in the already-productive career of the 5-year-old, who took the 12-furlong test with a fair bit of authority.

Racing with blinkers off in the Pan Am, Gufo fell out of the gates as is his custom and was allowed to lob along near the tail of the field as longshot Tide of the Sea (English Channel) galloped them along at a solid-enough tempo for the distance. A path or two off the inside as they reached the halfway point in 1:14.40, Gufo always traveled well within the grasp of Joel Rosario and was handy enough three furlongs out, but with some traffic up ahead of him. Held together on the turn as chief market rivals Abaan (Will Take Charge) and Temple (Temple City) got the jump on him, Gufo was steered out and around the latter five deep into the lane, found further acceleration with a couple of Rosario reminders, grabbed Abaan a sixteenth of a mile from the finish and proved a much-the-best winner. Abaan, who gave the winner two pounds, easily held second ahead of Novo Sol (Brz) (Agnes Gold {Brz}), who took full advantage of a ground-saving trip throughout.

“It was perfect. He wasn't too far back,” said winning trainer Christophe Clement. “When he asked him to quicken on the outside, he was there for him. We were not thrilled with the blinkers in his last two races last year. Looking back at it, I probably should have [removed them] earlier, but that's OK. We live and learn.”

After turning in too-little, too-late efforts in the GI Man o' War S. and GI Manhattan S. last season, Gufo was equipped with blinkers for the first time and ran out a comfortable winner of the Grand Couturier S. last July. Given a savvy ride by Rosario in the GI Sword Dancer S. in August, the handsome chestnut proved a neck better than Ballydoyle's Japan (GB) (Galileo {Ire}) in August, but the season ended on a bit of a sour note, with a third in the GI Joe Hirsch Turf Classic Invitational S. Oct. 9 ahead of a never-in-it 10th in the GI Longines Breeders' Cup Classic. Clement indicated that Gufo would attempt to go one better in the 11-furlong Man o' War, a $700,000 event to be contested at Belmont Park Saturday, May 14.

One of 43 black-type and seven top-level scorers on three continents for his expatriated sire, Gufo is a half-brother to the versatile fan-favorite Hogy (Offlee Wild) as well as a yearling filly by Preservationist. Floy was most recently bred to another Danzig-line stallion in the form of Hard Spun.