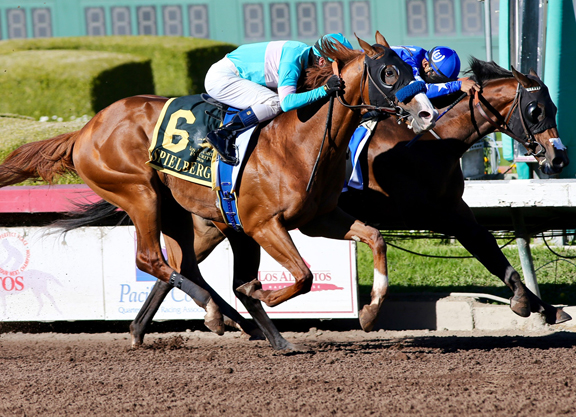 “We'll see how he stacks up,” Baffert said Friday.

Spielberg, who is scheduled to breeze at Santa Anita Sunday before shipping to South Florida, most recently finished a well-beaten second behind Eclipse champion Essential Quality (Tapit) in the Feb. 27 GIII Southwest S. at Oaklawn Park.

“He's a great-feeling horse,” Baffert said about the colt's latest start. “He came out of that race in great shape.”

In his 2021 debut, the $1-million KEESEP purchase stumbled at the start of the GIII Robert B. Lewis S. at Santa Anita before finishing fourth behind Baffert-trained winner Medina Spirit (Protonico).

“He needs to get away from the gate well,” said Baffert of Spielberg's chances of winning the Florida Derby.

During his juvenile campaign, Spielberg finished second in the GI Del Mar Futurity and third in the GI American Pharoah S. at Santa Anita before breaking is maiden in his fourth start. He went on to win the GII Los Alamitos Futurity.