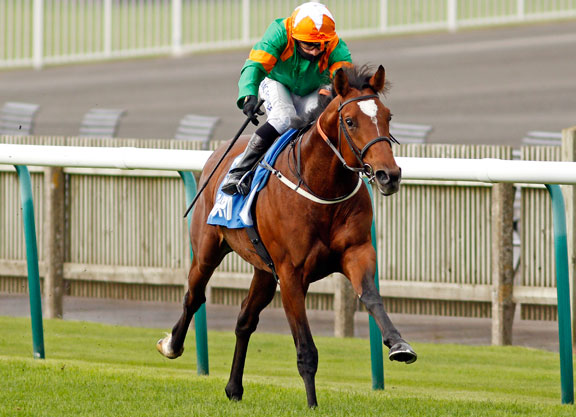 Group 3 winner Lone Eagle (Ire) (Galileo {Ire}) will aim to enhance his G1 Cazoo Derby chances with a start in the G3 bet365 Classic Trial at Sandown Park on Apr. 23. Second at first asking at Sandown in August, he got off the mark later that month at Goodwood over a mile. He quickly added a Sept. 12 Doncaster handicap and the G3 Zetland S. over 10 furlongs at Newmarket in his juvenile swansong on Oct. 10.

Trainer Martyn Meade said, “The plan is to go to Sandown on Friday with Lone Eagle. He improved all the time last year and he did everything we asked of him. He is totally laidback at home. He is a horse that never shows anything at home but just gives his all on the racecourse.

“He coped with Sandown well first time out there when he was a bit unlucky, so hopefully he can go one better there this time.

“After the race on Friday it will tell us where we are and whether we need to work him on our Derby gallop at home but so far he is going the right way.

“I think he is pretty versatile ground-wise and I don't think he is ground dependent as far as I can ascertain, both from what we have seen at home or on the race track.”

“Statement showed she is good enough for that level on Sunday and Alcohol Free (Ire) (No Nay Never) just got the first run on us a bit,” Meade said.

“I'm not sure about the 1000 Guineas yet as she had a hard race at Newbury. The 1000 Guineas is in just under a fortnight and I'm just going to see how she is over the next two or three days.

“She is in the race and if she is firing on all cylinders then we would go, but it might just come too quick and we might then go to the French Guineas instead as she does take a bit of minding.

“I do think she is top class but I don't want to back her up quick and end up leaving her season behind.”