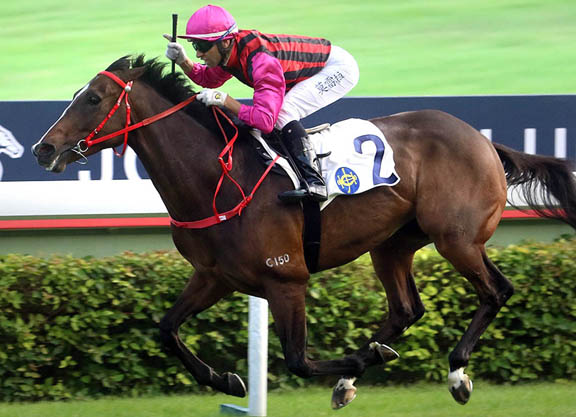 Top-level racing returns to Hong Kong Sunday afternoon with the G1 Stewards' Cup (1600m) and the G1 Centenary Sprint Prize (1200m) and trainer John Size and jockey Joao Moreira look to have strong claims in both of the HK$10-million events.

The travails of two-time defending Horse of the Year Beauty Generation (NZ) (Road to Rock {Aus}) have been well-documented and the 7-year-old is looking to snap a three-race skid that includes latest third to Japan's Admire Mars (Jpn) (Daiwa Major {Jpn}) in the G1 Longines Hong Kong Mile Dec. 8. But it is the Size-conditioned Waikuku (Ire) (Harbour Watch {Ire}) that appears set to wrest the title of leading local miler away from Beauty Generation. Last year's Hong Kong Derby runner-up took down the champ's colors when in receipt of five pounds in the G2 Jockey Club Mile Nov. 17 and his runner-up effort in the Hong Kong Mile last time may have been unlucky, according to jockey Joao Moreira.

“It was quite a shame that he wasn't able to win that race, but he was a bit unlucky and that might have cost him the race,” the 'Magic Man' told the HKJC's David Morgan. “In different circumstances, I'm quite confident he would have won the race.

“He deserves a Group 1,” Moreira said. “He's done enough to have that reputation and I really believe it's just a matter of time and it's likely to be this time. If it's not, I have no doubt that he's going to win a Group 1 because he seems to be classy enough to be winning those types of races.”

Size sends out four of the seven runners in the Centenary Sprint Prize, the quartet headed by Beat the Clock (Aus) (Hinchinbrook {Aus}), who defeated Mr Stunning (Aus) (Exceed and Excel {Aus}) in this race last year and exits a neck success over stable companion Hot King Prawn (Aus) (Denman {Aus}) in the Hong Kong Sprint some six weeks ago. The 6-year-old has been a model of consistency during his career, having won nine of his 23 starts while never finishing outside of the top three.

“He just doesn't like to run a bad race; he's such a sound and nice individual,” Moreira told HKJC's Declan Schuster. “In some of the races he has placed in he could have nearly won–reasons like he was unlucky in the gate or off his splits he was not able to get there–but he is a winner and he likes to keep doing his best every time he steps out.”

The Brazilian views another of Beat the Clock's stablemates, Full of Beauty (Aus) (Darci Brahma {NZ}) as Sunday's chief danger. Beaten just over a length into fifth at odds of 22-1 in the Hong Kong Sprint, he was a touch slow away and couldn't bridge the gap late.

“Full Of Beauty was a bit unlucky last time,” Moreira said. “It looks like something happened in the gate, he's done that before and he finished very close–so if he's able to do things a little bit more proper he might be the one to beat.”