Gritty Whitmore 'Still There Being Honest' 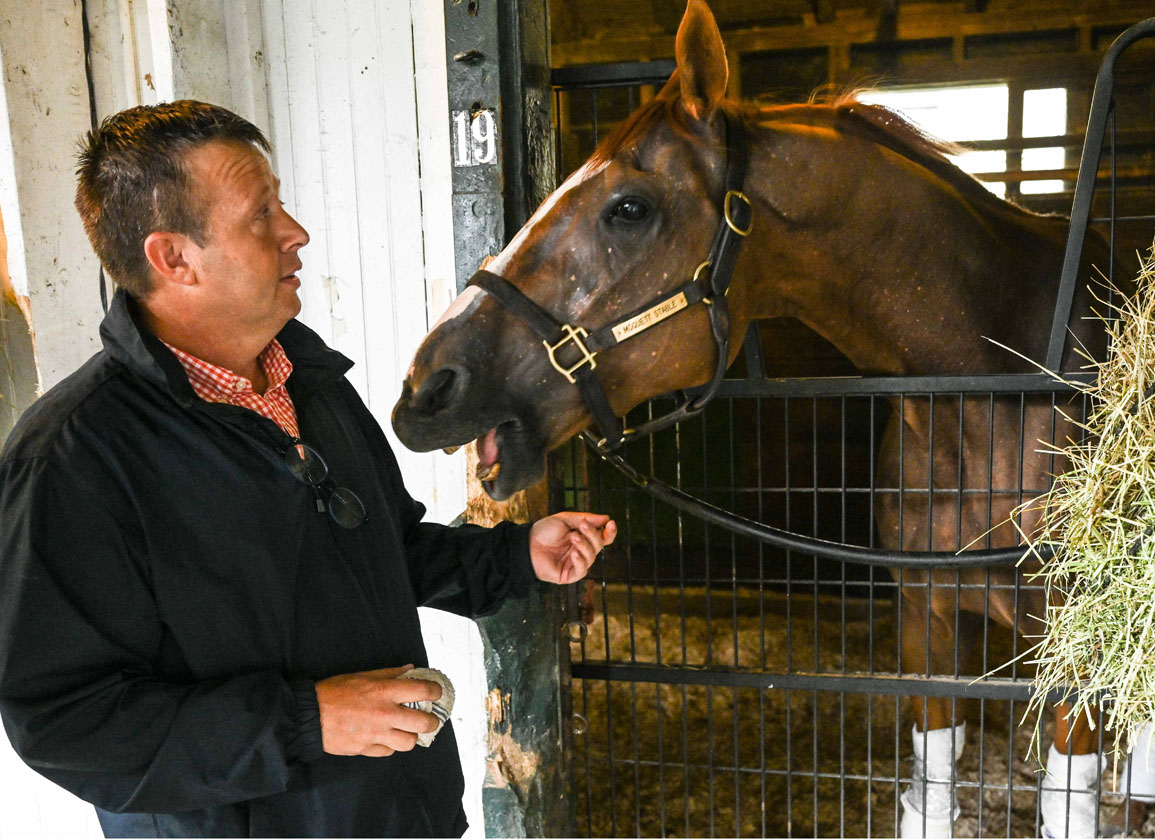 SARATOGA SPRINGS, N.Y.–To illustrate his point about Whitmore (Pleasantly Perfect), trainer Ron Moquett stepped into the Eclipse Award winner's stall Sunday morning saying, “This is not the time to do this,” and rubbed his star's coat with a small towel. Showing his displeasure, Whitmore promptly kicked the wall. Hard.

“He is as consistent as the day is long,” Moquett said, smiling. “He will do everything the exact same way. Our job is to get done, working with him, knowing his idiosyncrasies.”

Moquett and his staff live in Whitmore's world, ruled by the 8-year-old gelding who is scheduled to make his 42nd career start–the 13th in a Grade I–in the Alfred G. Vanderbilt H. Saturday at Saratoga Race Course. Dependable as he is gritty and irascible, Whitmore, who was 19th in the 2016 GI Kentucky Derby, has flourished in the sprint division and was the 2020 champion. Overall, during his career, he won 15 times and has finished in the money in 78% of his races while earning over $4.4 million in purse money.

In the seven years since Moquett purchased the 2-year-old named Pleasant Mel in a private sale for $37,000, he and his staff have learned how to keep Whitmore in balance. Carlos Monroy has been his groom since he arrived. Moquett's wife and training partner, Laura, is his exercise rider. Moquett repeats a word to describe Whitmore's personality and his competitive nature, which is why he is catered to every morning and afternoon.

“I'm amazed all the time, just in his consistency,” Moquett said. “The thing is Whitmore doesn't owe us anything. So he gets to do what he wants to do every day of his life. If he wants to stay in the barn and do nothing, that's what he gets to do. His honesty and loyalty has been there and we owe him.” 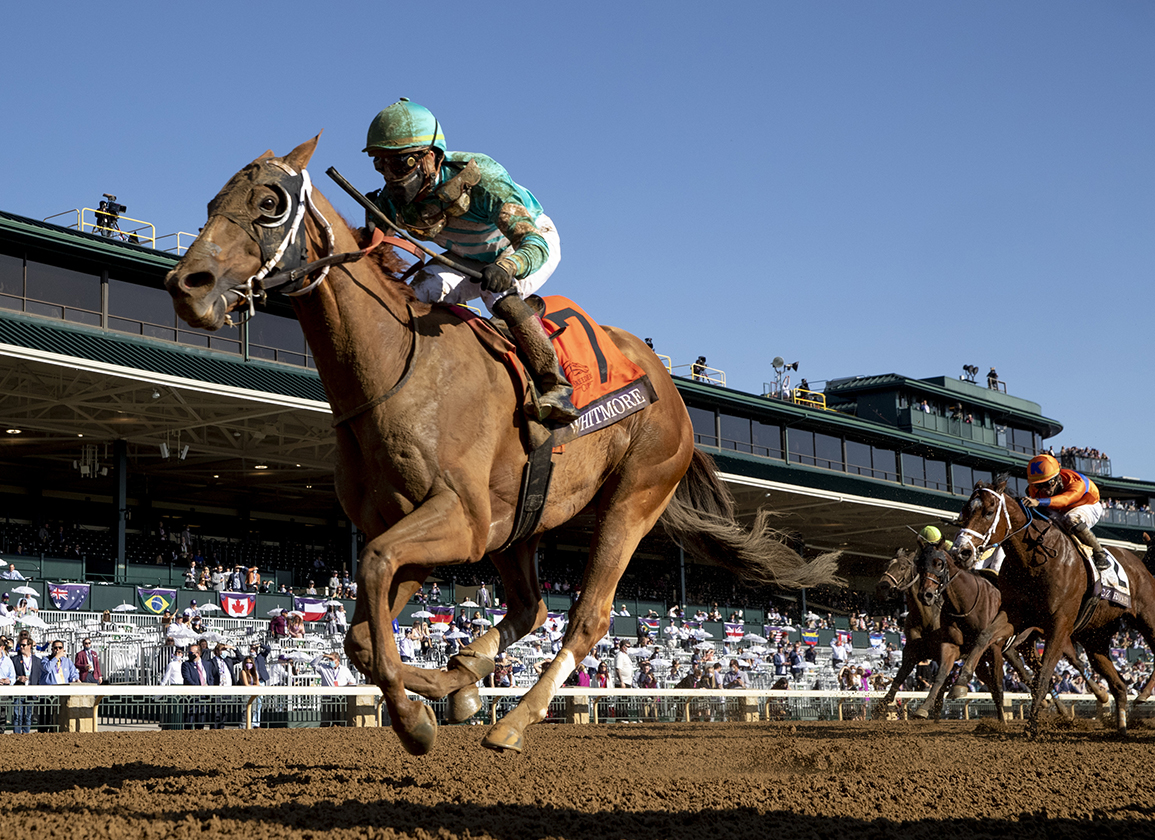 It's fair to say that Whitmore reached another level of popularity with his victory in the GI Breeders' Cup Sprint last November at Keeneland. As he had done so many times in the past, the big chestnut came from far off the early pace to beat C Z Rocket (City Zip) by 3 1/4 lengths. After two rare off-the-board finishes prior to the Sprint, he was 18-1 in the wagering.

Moquett said he was overwhelmed by who responded to the decisive score in the Sprint.

“The thing that will always be what touched me the most was other trainers' and competitive owners' and jockeys' reactions,” he said.

Among those who reached out to Moquett, 49, were Hall of Fame trainers Todd Pletcher, Steve Asmussen, Bob Baffert and Richard Mandella, who developed his sire, Pleasantly Perfect, into a major star.

“Here's the thing that people have got to realize,” Moquett said. “One, I like horses more than your average person likes horses. Two, I love horse racing. So I'm still a fan, even though I'm in the business. So when you get a text from Pletcher, you get a text from Asmussen or Asmussen cheers for your horse…”

Moquett didn't complete the sentence, but finished the thought.

“I get people coming up to me and they don't know me from a load of hay,” he said. “I could have been the leading trainer at Oaklawn or Churchill or Ellis by 50-whatever and they might not say hi to you. But they relate to him and they're like, 'Man, congratulations. I was really cheering for your horse.' That's something for a guy that grew up just a huge fan of all things racing.”

Moquett started with Quarter Horses and moved to Thoroughbreds in 1997. He has a solid stable that is nearing $32 million in career earnings, but Whitmore is by far the most successful of his runners. It took an interesting twist of fate for Moquett to land Whitmore. Shut out at the 2015 June Ocala sale, Moquett asked his friend, the agent Jeff Mackor, to send him some pictures of horses that had not sold and were still available. One of the dozen images Mackor sent him prompted a reaction. 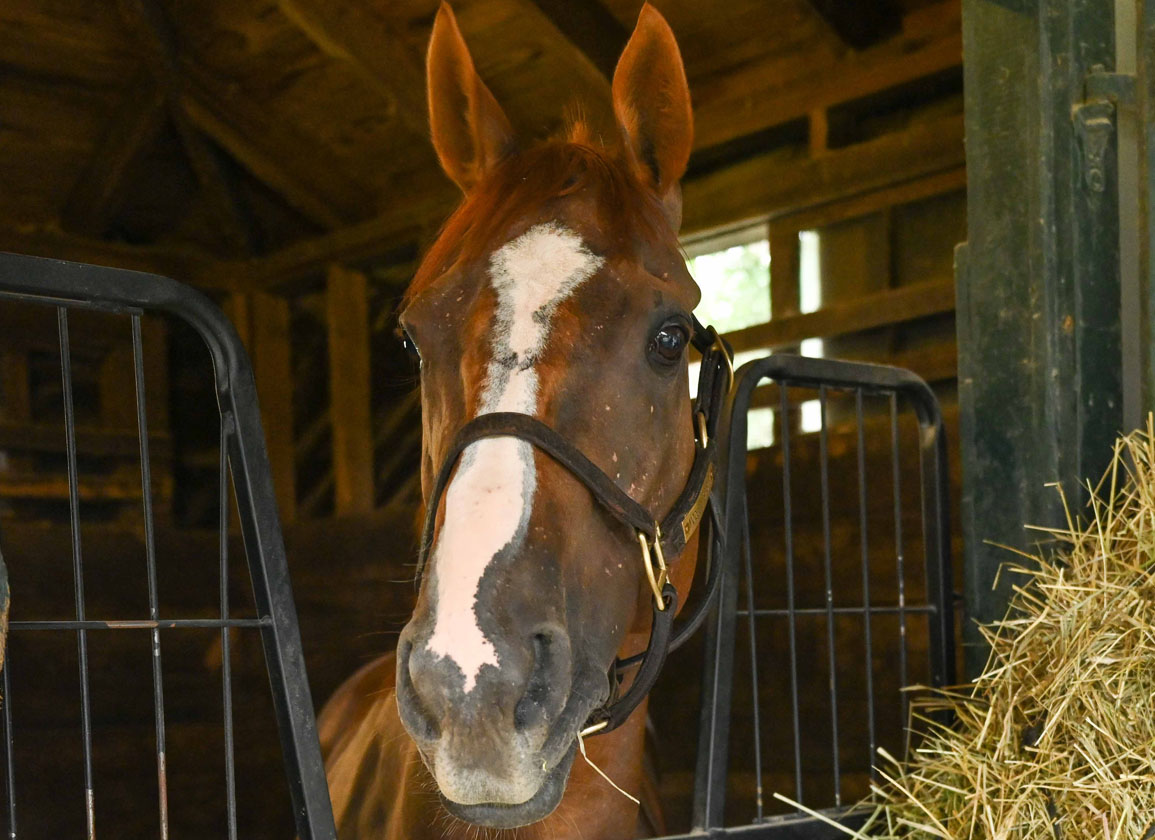 Whitmore in his stall at Saratoga this week | Mike Kane

Moquett made it clear that he liked what he saw: “I sent him back a two-word text that said, 'Buy him.'”

Mackor made the deal and Pleasant Mel joined the Moquett stable.

“That's a running joke, too,” Moquett said. “People that knew when I bought him I just despised the name. I know it's named after a lady named Melody and his mother's name was Melody [Melody's Spirit, by Scat Daddy]. And the daddy is Pleasantly Perfect. They combined it, but he was neither a Mel or pleasant.”

“I changed his name after him because he kind of reminded me athletic-wise of Whitmore,” Moquett said. “Whitmore is just a natural athlete that could do anything better than you.”

Moquett had two partners in Whitmore when he ran in the Derby: Robert LaPenta and Harry Rosenblum. Sol Kumin's Head of Plains Partners purchased Rosenblum's stake in the horse in April 2017.

Whitmore came out of the Derby with a chip in his knee that had to be removed by surgery. Moquett said his partners never quibbled about the surgery but he fretted about how it would affect the horse.

“That was the time where I went, 'Man. I hope we can 'cause a lot of horses don't come back,'” he said. “That's the reason why a lot of horses retire whenever they have a little bit of something wrong with them is because they come back a dimmer version of what was so bright.”

Whitmore promptly answered the question when he returned to competition in December 2016 with the first of five straight victories. He's been a serious player in the sprint division ever since. He was second in the 2018 Breeders' Cup Sprint and third in 2019.

From Moquett's perspective, Whitmore has remained successful into racing's geezerhood because he loves to run and the stable knows how to treat him. That includes flying in his farrier from Louisville, Ky., to deal with his tender feet.

“There's not a big turnover in our barn for employees. There's a familiarity that allows us to know the subtle things,” Moquett said. “And we use that as an indicator. We're going too far. We're not going far enough. We're going too hard. We're not pushing. We take in all that. I think it's kind of like cooking with the same skillet. You know what you're doing after that.”

With his compelling back story and his strong performances in graded stakes after graded stakes, Whitmore has become an inspiring horse.

“This has nothing to do with me. A lot of people that cheer for Whitmore can't tell you my name,” Moquett said. “They liked the fact that he ran in the Kentucky Derby. Everybody else is going to make babies and whatever and he's just still there being honest. And he wins. He wins when he's supposed to. He tries. From that point on, that's all anybody wants is honesty. They want to know that they got a fair shake.

“The thing about 'Whit' is you can never guarantee a win or whatever, but you can guarantee that he'll give you what he's got. I think that makes people like him.”