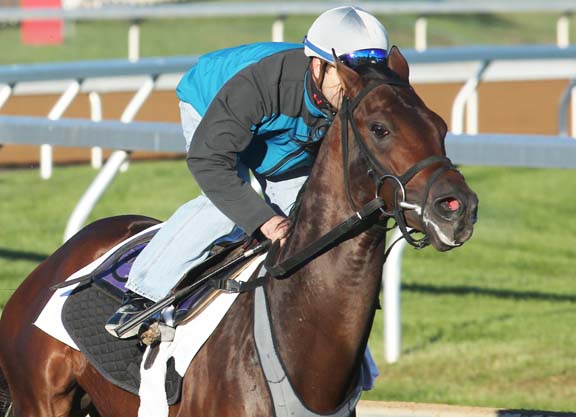 GI Champagne S. winner Greenpointcrusader (Bernardini) had his first work over the Keeneland oval Monday, going five furlongs in 1:01.80 (video) in advance of a tilt at the Oct. 31 GI Breeders' Cup Juvenile. The dark bay colt produced fractions of :13.40, :25.60 and :38 before galloping out six furlongs in 1:15.40 with jockey Joe Bravo aboard.

“This was just a maintenance move and he doesn't have to do too much,” trainer Dominick Schettino said. “We will come back with something similar Saturday or Sunday, depending on the weather. There is rain in the forecast for Sunday, so we may move it up a day.”

Greenpointcrusader, owned by St. Elias Stable, MeB Racing Stables and Brooklyn Boyz Stables, broke his maiden second time out at Saratoga Sept. 5. Bravo was aboard for the first time when the colt scored a 4 1/2-length victory in the Oct. 3 Champagne.

“This was the first time [I worked him] and he was awesome,” Bravo said. “He is pretty pleasant to ride and he wanted to do it.”