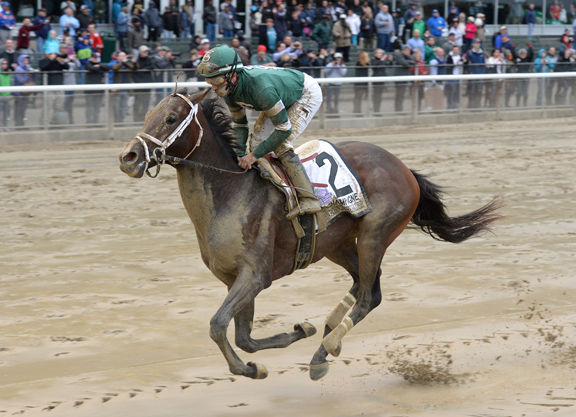 Grade I winner Greenpointcrusader (Bernardini–Ava Knowsthecode, by Cryptoclearance) has been retired to stud and will stand his first season in 2018 at Ocala Stud in Florida. A fee will be announced at a later date.

“Greenpointcrusader was one of the best 2-year-olds of his crop, as evidenced by fast wins against Saratoga maiden company and in the Grade I Champagne S. at Belmont,” said Ocala Stud's J. Michael O'Farrell. “He has a tremendous stallion pedigree, with two of his brothers currently standing stud in Kentucky, and he's the only Grade I-winning 2-year-old out of his highly-accomplished dam. There's a lot to like about this horse, and we believe breeders will really like him when they see him.”

Trained by Todd Pletcher for owners St. Elias Stables, MeB Stables and Brooklyn Boyz Stables, Greenpointcrusader retires with three wins from nine starts and earnings of $473,300. Bought for $575,000 as a Keeneland September yearling, he is a half-brother to GISW and freshman sire Justin Phillip (First Samurai) and a full-brother to GSW sophomore sire Algorithms.

“Anthony Bonomo and I are big believers in Greenpointcrusader's future as a sire, and love his pedigree, look and racing form,” said co-owner Vinnie Viola of St. Elias Stables. “He ran extremely well as a 2-year-old and finished first or second in four of his first five races before injuries derailed his racing career. We intend to support him with a number of our own high-quality broodmares. Anthony and I are pleased to stand Greenpointcrusader at Ocala Stud and put him in the hands of the O'Farrells, in whom we have a lot of confidence in making Greenpointcrusader the next great sire to stand in Florida.”