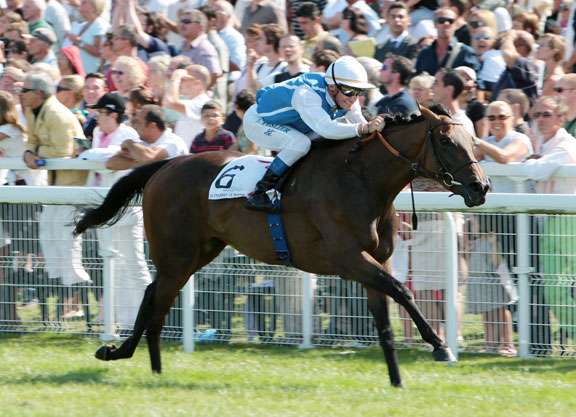 “It is with immense sadness that we inform you of the death of champion Goldikova on Jan. 5, 2021,” Wertheimer et Frere Racing Manager Pierre-Yves Bureau told Jour de Galop. “Goldikova will remain in our memories as our best racemare with her 14 Group 1 wins, among which was a splendid Prix Jacques le Marois in 2009 and her historic triple in the Breeders' Cup Mile.”

Bred by Wertheimer et Frere out of their excellent producer Born Gold, Goldikova joined the yard of trainer Freddy Head in 2007 and was an immediate hit, winning her two juvenile outings with ease. She lost her unbeaten record on her 3-year-old debut when third in Longchamp's Prix du Louvre, and found the great Zarkava (Ire) (Zamindar) too good in both the G1 Poule d'Essai des Pouliches and Prix de Diane; she was second in the former, with Coolmore's now-great producer Halfway To Heaven (Ire) (Pivotal {GB}) back in third, and third in the Diane, with she and Zarkava split by Gagnoa (Ire) (Sadler's Wells), a half-sister to Derby winner Pour Moi (Ire) (Montjeu {Ire}).

Goldikova returned to the winner's enclosure next out in the G3 Prix Chloe and went unbeaten the remainder of the season, taking in the G1 Prix Rothschild and G1 Prix du Moulin before her first score in the Breeders' Cup Mile at Santa Anita, where she made Head the first individual to have ridden and trained a winner at the great meeting. He has since been joined by Joseph O'Brien.

Goldikova began her 4-year-old season with an uncharacteristically dull seventh in the G1 Prix d'Ispahan over the soft ground, but bounced back to win three consecutive Group 1s: the Falmouth S., Rothschild and the Prix Jacques le Marois by six lengths in what is credited as her best performance with an official rating of 131. Third when dropped back to seven furlongs in the G1 Prix de la Foret, Goldikova justified favouritism once again to defend her Breeders' Cup Mile title back at Santa Anita, equaling the feat that Head had achieved aboard the great Miesque 21 years earlier in winning back-to-back Miles, a feat also accomplished by Lure in 1992 and 1993. Wise Dan won the race back-to-back in 2012 and 2013. Da Hoss had won non-consecutive Miles in 1996 and 1998. Goldikova was at the time one of 10 horses to win twice at the Breeders' Cup, with Conduit (Ire) (Dalakhani {Ire}) and Zenyatta (Street Cry {Ire}) interestingly having also accomplished the feat in the 2008 and 2009 Breeders' Cups at Santa Anita. A further nine horses have since won twice at the Breeders' Cup.

Redeeming herself in the d'Ispahan with a half-length score to kick off her 5-year-old campaign in 2010, Goldikova traveled to Royal Ascot for the first time to take the G1 Queen Anne S. before winning a third Rothschild. She was second to the Guineas winner Makfi (GB) (Dubawi {Ire}) while attempting to defend her Marois title, but bounced back next out to go one better in the Foret before clinching a historic third Breeders' Cup Mile win at Churchill Downs over the American champion Gio Ponti (Tale of the Cat). That feat has not been matched since.

Returned to training at six, Goldikova bested Cirrus des Aigles (Fr) (Even Top {Ire}) to win a second d'Ispahan before finishing second to Canford Cliffs (Ire) (Tagula {Ire}) in the Queen Anne. In what would prove to be her final victory, she won a fourth straight Rothschild before finishing second in the Marois and the Foret to Immortal Verse (Ire) (Pivotal {GB}) and Dream Ahead (Diktat {GB}), respectively. Favoured for a fourth tilt at the Breeders' Cup Mile, Goldikova looked to be sitting a dream trip stalking the pace on the rail and hit the lead a furlong from home, but lacked the necessary late kick to hold off the Woodbine Mile winners Court Vision (Gulch) and Turallure (Wando). Goldikova retired to the illustrious Wertheimer broodmare band thereafter with 17 wins from 27 starts, and just one off the board finish, and £4,364,886 in the bank. Goldikova earned three Cartier Awards (Horse of the Year in 2010 and Older Horse in 2009 and 2010), was the American champion female turf horse in 2009 and 2010 and was in 2017 inducted into the American racing Hall of Fame.

Peslier, who was in the saddle for all 27 of Goldikova's starts, paid tribute to his former partner on Wednesday, saying, “It's very sad that she has passed away. She was a champion and an amazing filly. We travelled all over the world together, going to America and winning three times at the Breeders' Cup. We went to Royal Ascot and won and won many races in France as well, of course.

“It's very similar to Frankie Dettori and Enable–when you ride an amazing filly like that, she will be in your life forever. We have both ridden many winners and many Group 1 winners, but a filly like this–winning 14 Group 1–it's different. The owners were fantastic to keep her in training for as long as they did. She could have been retired, but the owners were like fans and they wanted to see her run.”

Goldikova was, somewhat remarkably, the ninth foal out of Born Gold, and the mare did her best producing in the twilight of her broodmare career, with Goldikova followed by the G1 Prix Vermeille scorer and Prix de Diane second Galikova (Fr) (Galileo {Ire}), the G1 Prix Paul de Moussac scorer and the five-times Group 1-placed Anodin (Ire) (Anabaa) and the G3 Prix Vanteaux victress Gold Luck (Fr) (Redoute's Choice {Aus}). Goldikova is also a half-sister to the Group 3 winners Gold Sound (Fr) (Green Tune) and Gold Round (Ire) (Caerleon), and the latter is the best producer out of Born Gold, having left behind five stakes horses including the G3 Prix Minerve scorer Golden Valentine (Fr) (Dalakhani {Ire}). Gold Round is also the second dam of Prix Vanteaux winner Platane (GB) (Le Havre {Ire}).

Goldikova produced a pattern race winner in her second foal, the G3 Prix Cleopatre winner and Prix de Diane third Terrakova (Ire) (Galileo {Ire}), and from her four other foals of racing age just the filly Goldika (Ire) (Intello {Ger}) is a winner. Her newly turned 3-year-old is the Dubawi (Ire) filly Goldistyle (Ire) and she has a 2-year-old colt by Galileo (Ire) named Lehman (GB), both in training with Carlos Laffon-Parias. Goldikova was not in foal for 2021.