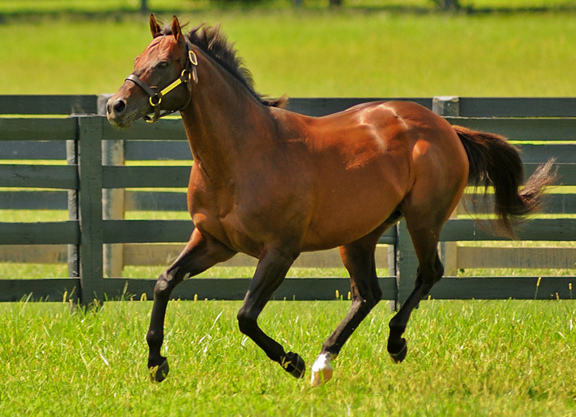 The second renewal of Argentina's Gran Venta Selecta yearling sale takes place on Sunday at the sales pavilion at San Isidro Racecourse in Buenos Aires, with 109 yearlings catalogued. Despite the coronavirus pandemic causing some sales in the U.S. and Europe to be canceled or postponed, Gran Venta Selecta has opted to go ahead while limiting patrons to serious agents and buyers, and no spectators.

Gran Venta Selecta was launched last year by leading local stud farms Haras Vacacion and Haras Abolengo with the vision of it growing into a sale of international stature. Yearling sales in Argentina are conducted differently than in other parts of the world; rather than droves of breeders pooling their resources into a few select events, two to three breeders will generally band together to offer their yearlings in small batches (usually around 50) at sales that occur sometimes multiple times a week during the high season, with the stud farms contracting out auctioning duties to one of a few select sales firms. The quality has been historically spread across the various sales.

Vacacion and Abolengo principals Pablo Zavaleta and Julio Menditeguy last year each committed their finest yearlings to the inaugural Gran Venta Selecta with the hopes that the sale would someday develop into a one-stop shop for international buyers looking to reap the best of what the country has to offer. And those studs are no strangers to producing top-class international horses; Abolengo bred Candy Ride (Arg) (Ride The Rails), while Vacacion is responsible for the 10-time American Grade I winner Paseana (Arg) (Ahmad {Arg}).

The pilot project was deemed a success, with the top lot bringing ASD5.6-million (£103,960/€119,991), a record for an Argentine yearling in pesos and with all of the sale's international visitors from the U.S., Hong Kong, Malaysia and South Africa each taking home at least one horse.

International bloodstock agent Emmanuel de Seroux summarized last year's sale, saying at the time, “I think this is a very good first experience to show the Argentine yearlings to the world. I think people will be more and more interested to come and they need to, because they can access some fantastic pedigrees at 20% of the price of what they'd have to pay at Keeneland or Newmarket.

“You can come to a sale like this and buy half a dozen very well-bred fillies for $50,000 or $60,000 each, and you start a very nice breeding program. If you have one or two good ones out of the five or six it's fantastic, and the others, due to their pedigrees, they're still very nice broodmares for the future.”

While the challenges facing the second renewal of the sale are no doubt heightened by the coronavirus effect and an Argentine economy that was already struggling, it doesn't suffer from a lack of quality bloodstock. The sale has been bolstered this year by the addition of a select handful of yearlings from studs Embrujo, La Providencia and Santa Ines, and the offerings include the progeny of leading local sires like Equal Stripes, Hurricane Cat and Orpen, as well as promising young sires like Treasure Beach (GB) (Galileo {Ire}) and John F Kennedy (Ire) (Galileo {Ire}), the latter represented by his second crop. The sale includes 21 first-crop Southern Hemisphere yearlings by Coolmore shuttler War Command (War Front), including a half-sister to Group 1 winner and sire In The Dark (Arg) (Mutakddim) (lot 4); a filly out of Que Piensa Cat (Arg) (Easing Along) (lot 14), a local Group 1 winner who produced the stakes-winning Always Thinking (Street Sense) during her time in the U.S.; and a half-sister to last year's record-setting sale topper (lot 28). International flavour is added by sons of Cityscape (GB) (lot 12)-a half-brother to Argentine and American Group/Grade 1 winner Hi Happy (Arg) (Pure Prize) and Violence (lot 108)-from the family of former international sire Mutakddim.

Quality is evident from the first turns of the catalogue pages. Lot 1 is Abolengo's son of the champion sire Equal Stripes and a full-brother to Paulinho (Arg) and Positive Mind (Arg), winners respectively of the Group 1 Gran Premio Estrellas Juvenile and Juvenile Fillies; the equivalent of the Breeders' Cup in Argentina. Lot 2 is by Godolphin's Grade I-placed Fortify (Distorted Humor) and a full-sister to G1 Gran Premio Jockey Club winner Roman Joy (Arg), while lot 3 is an Orpen half-sister to 2-year-old champion Galicado (Arg) (Asiatic Boy {Arg}) and Group 1-winning juvenile Got Talent (Arg) (Easing Along {Arg}).

Since the days of Paseana, Argentine bloodstock has continued to resonate globally. Candy Ride of course continues to turn out runners of the highest quality at Lane's End Farm. The nation also gave us the American Horse of the Year Invasor (Arg) (Candy Stripes), and more recently horses like Blue Prize (Arg) (Pure Prize), Hi Happy and Vale Dori (Arg) (Asiatic Boy {Arg}) have flown the flag at the highest level abroad. Argentine mares have produced recent Grade I winners like Carina Mia (Malibu Moon) and Salutos Amigos (Salute The Sarge) in the U.S., and they have been on a particular tear in Japan with the likes of champions Satono Diamond (Jpn) (Deep Impact {Jpn}) and Danon Fantasy (Jpn) (Deep Impact {Jpn}) to their credit. G1 Tokyo Yushun winner Makahiki (Jpn) (Deep Impact {Jpn})'s second dam is Japanese-bred. That Group 1 list could soon grow, too, with Satono Flag (Jpn) (Deep Impact {Jpn}), a son of the Vacacion-bred Balada Sale (Arg) (Not For Sale {Arg}), having taken a Japanese Derby prep last weekend.

The sale begins at 2:30 p.m. local time. Click for the catalogue, to watch the sale live or for a recent TDN Look feature on Buenos Aires and the Argentine industry. A report on the sale results will appear in Tuesday's TDN.