Got Stormy Up In Time in Franklin County 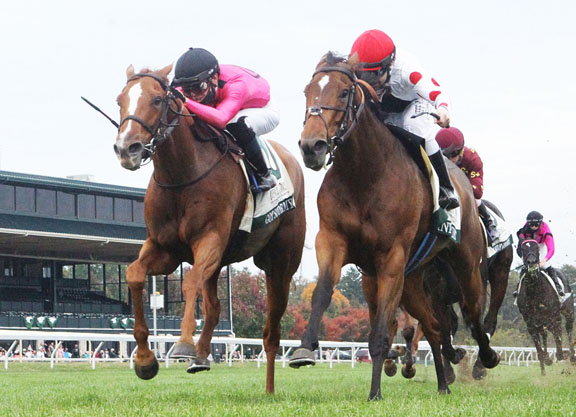 Making just her second lifetime appearance in a true one-turn race and trying a distance as short as 5 1/2 furlongs for the first time in career start number 25, the classy Got Stormy (Get Stormy) needed every inch of the Keeneland stretch, but was shoved across the line by Tyler Gaffalione to win Friday's GIII Buffalo Trace Franklin County S.

Got Stormy broke outward at the start, bothering Chalon (Dialed In) to her outside, and settled near the back of the field through the opening exchanges. Not rushed into the race and patiently handled while racing with cover on the turn, the chestnut was steered out to the grandstand side, but had the better part of a six-length deficit to overcome with time ticking away. But the 9-10 favorite sustained her rally into the final furlong and dropped her nose down just ahead of Into Mystic (Into Mischief), whom she defeated into third in their previous head-to-head battle in the GIII Ladies' Sprint S. at Kentucky Downs Sept. 12. Got Stormy covered her final three-sixteenths of a mile in an other-worldly :16.75. She sprinted her final 110 yards in :5.69. Into Mystic sat a cozy trip inside, pulled out three wide at the entrance to the stretch and proved a luckless loser. Jakarta (Bustin Stones) made the running and settled for third.

Runner-up to Uni (GB) (More Than Ready) in last year's GI Breeders' Cup Mile, Got Stormy closed the season victoriously in the GI Matriarch S., but took some time to find form this year. Ridden a bit handier to the pace than she had been in 2019, Got Stormy just missed against males in the GI Kilroe Mile in March, but was no better than fourth in Belmont's GIII Beaugay S. June 3 and in the GIII Poker S. July 4. She hinted at a return to her best with a hard-trying second to loose-on-the-lead Halladay (War Front) in defense of her title in the GI Fourstardave H. at Saratoga Aug. 22 before successfully dropping back to 6 1/2 furlongs over soft turf at Kentucky Downs last time.

Winning trainer Mark Casse indicated that Mother Nature could have a hand in which Breeders' Cup race Got Stormy ends up in.

“[Owner] Gary [Barber] and I will talk about it and if the turf course were to be extremely firm, it would be a decision [between the Mile and the Turf Sprint]. It's all going to depend on weather,” the conditioner said.

Got Stormy is one of two stakes performers for her dam, a half-sister to the Mt. Joy-bred MGSW/MGISP Smooth Air (Smooth Jazz) and to Grade II-winning juvenile Overdriven (Dixie Union). Third dam Twin Propeller was a reliable runner for Brian Burns's operation in the Midwest, winning stakes events at the Fair Grounds and at Arlington Park while under the care of the late Gene Cilio. Got Stormy has a 2-year-old half-brother named Got Curly (Super Saver), a yearling half-brother by Mohaymen and a weanling half-brother by Bolt d'Oro. She was covered by Uncle Mo this past breeding season.