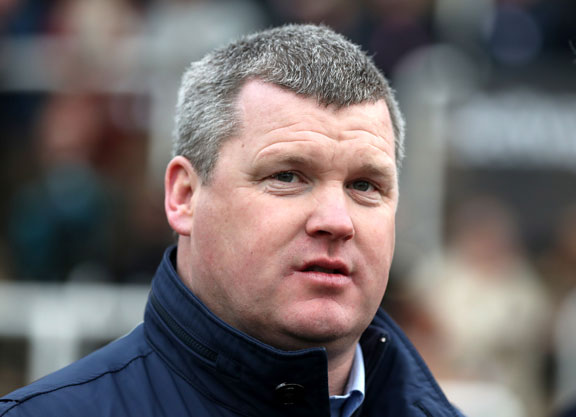 Irish National Hunt trainer Gordon Elliott has said that he is “paying a very heavy price” but that he has no complaints after being handed a 12-month suspension by the Irish Horseracing Regulatory Board (IHRB), with the last six months of the ban suspended. While it has been announced that the latter second half of the ban has been suspended, it has yet to be announced for how long that suspension would apply and what level of offence would cause it to be triggered. Elliott has not been fined but was ordered to pay €15,000 towards the IHRB's costs.

The referrals committee of the IHRB heard evidence on Friday relating to the social media release last weekend of a disturbing photograph showing Elliott sitting astride a dead horse on his gallops in Co Meath. The horse was later identified as the Gigginstown House Stud-owned Morgan (Ire), who is believed to have suffered a heart attack during routine morning exercise in 2019.

After being handed his penalty, Elliott released a statement on his Twitter account on Friday evening. He said, “I accept my situation and my sanction and am satisfied with my engagement with the Irish Horseracing Regulatory Board. It is not an easy job to sit on the panel but I was dealt with fairly.”

Elliott added, “I am in this situation by my own action and I am not going to dodge away from this. With my position in the sport I have great privileges and great responsibility. I did not live up to that responsibility.

“I am paying a very heavy price for my error but I have no complaints. It breaks my heart to see the hurt I have caused to my colleagues, family, friends and supporters. I have a long road ahead of me but I will serve my time and then build back better.”

The trainer has assured the IHRB that he will not attend a race meeting or a point-to-point fixture for six months. The authority has released details of the findings of the referral committee hearing.

Its concluding statement read, “We consider that a suspension of Mr Elliott's training licence is merited. In all of the circumstances of this case, to reflect the seriousness of the offence and the damage to the Irish racing industry, to deter other offences of this nature and having taken into account the mitigating factors we have heard, we consider the period should be 12 months, however the last six months of this will be suspended.”

Assessing the decision, Denis Egan, CEO of the IHRB said, “Where breaches of rules occur and where participants in racing act in a manner that brings the sport into disrepute, there are no winners, and in fact, the loss is to Irish racing with damage to the reputation of the sport. Having acted with thoroughness and having followed due process at all times, the IHRB team are satisfied that the case has been dealt with fairly and appropriately.”

He added: “Ireland and its racehorse trainers, riders, breeders and workers are held in high regard globally providing some of the very best horses and the very best racing talent.

“We recognise the heartfelt upset that this matter has caused to people inside and outside of racing, none more so than to the staff employed by Mr Elliott. We also see at first hand both on the racecourse and as part of our stable inspection programme that horses receive unrivalled care, attention, and affection. Indeed, as part of the investigation into this very case, an unannounced stable inspection of Mr Elliott's yard this week led to no concerns about the welfare of the horses in his care, as has been the case during any other inspection we carried out at his premises each year. In our opinion the incident covered in today's hearing is not reflective of Irish racing.”

Elliott's conduct was considered under Rules 272 and 273 (xiii) of the Rules of Racing and Irish National Hunt Steeplechase Rules. The former deals with licensed individuals acting “in a manner which is prejudicial to the integrity, proper conduct or good reputation of horseracing” and the latter with any act “likely to be prejudicial to the interests of the IHRB or which is likely to cause serious damage to the interests of horseracing in Ireland.”

There has been widespread condemnation throughout the racing world and beyond of the image—in which Elliott appears to be giving the 'victory' sign while sitting on the stricken horse—following its emergence on Saturday. The following evening the three-time Grand National-winning trainer released a statement to confirm the authenticity of the photograph and stated that he was cooperating fully with the IHRB investigation.

The trainer this week lost his yard sponsor, eComm Merchant Solutions, the company owned by Noel and Valerie Moran, who have a number of horses in training with Elliott, including G1 Triumph Hurdle joint-favourite Zanahiyr (Ire) (Nathaniel {Ire}). Betfair also announced that it would be discontinuing its association with Elliott, who was an ambassador for the betting exchange firm.

Elliott has previously twice been the leading trainer at Britain's biggest jumps meeting, the Cheltenham Festival, which is set to start on Tuesday, March 16.

A statement from the British Horseracing Authority (BHA) on Friday read, “We welcome the fact that the Irish authorities have acted swiftly. The suspension will be reciprocated here in Great Britain. The existing restriction on Mr Elliott having runners in Great Britain will stay in place until the suspension takes effect on 9 March.

“The IHRB Referrals Committee pointed to the fact that the photo showed appalling bad taste and demonstrates a complete absence of respect for the horse. We endorse these comments, and the view that respect is an integral and essential part of the duty of those in charge of animals.”

It continued, “Today's decision confirms that horses will not be able to run at the Cheltenham Festival or Grand National Festival in the name of Gordon Elliott. However, if horses are transferred directly to other licensed trainers prior to 9 March – when the suspension is due to commence – they will be able to run.”

With the National Hunt season for 2020/21 set to conclude at the end of April, Elliott is the leading trainer by number of winners—his tally of 155, including two at Fairyhouse on Friday, puts him 17 clear of Mullins, who is ahead on prize-money.