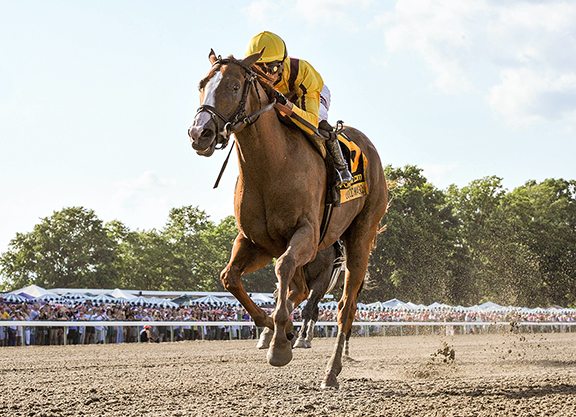 A field of 11 was drawn Tuesday evening at the Adelphi Hotel in downtown Saratoga for Saturday's GI Runhappy Travers S., with last year's Eclipse champion 2-year-old Good Magic (Curlin) drawing post nine before being installed the 2-1 morning-line favorite for the 1 1/4-mile race. Gronkowski (Lonhro {Aus}), who will be making his first start since a runner-up finish behind Justify (Scat Daddy) in the June 9 GI Belmont S., will break from post three and is the 4-1 second choice. Both runners are trained by Chad Brown.

“I'm really happy with both posts,” Brown said. “It's exactly what we wanted. We wanted Gronkowski inside and Good Magic outside. We will leave out of there with Good Magic, use his speed and establish a forward position early.”

Good Magic, who won last year's GI Breeders' Cup Juvenile, was second behind Justify in the GI Kentucky Derby and, after a fourth-place effort in the GI Preakness S., returned to the winner's circle with a three-length romp in the July 29 GI Haskell Invitational. He tuned up for the Travers with a best-of-17 five-furlong drill in 1:00.44 Friday. Gronkowski went the same distance Sunday in 1:00.02 (6/30).

“They've been training terrific, thankfully,” Brown said. “Both horses have been training over this track particularly well and are coming off strong works coming into the race.”

Queen's Plate winner Wonder Gadot (Medaglia d'Oro), seeking to become the first filly to win the Travers in 103 years, is third choice on the morning line at 5-1. She will break from post two.

Ahead of Saturday's marquee race day at Saratoga, the New York State Gaming Commission announced the implementation of enhanced security protocols for the GI Travers S. and GI Sword Dancer S. Horses running in the Travers will be subject to continuous 72-hour dedicated watch by security personnel leading to post-time. Horses running in the Sword Dancer will be subject to intensified watch by experienced security personnel conducting mobile surveillance and direct horse checks at least three times per shift from 72 to 30 hours prior to their race, with continuous dedicated watch taking place for the final 30 hours before post-time. The security precautions also require a daily veterinarian's record of all medications and treatments given to horses within 72 hours prior to the race and the commission will post these records on its web site each day before races, starting Aug. 22. The commission will also obtain out-of-competition blood samples of horses competing in these races and send them to the New York State Equine Drug Testing and Research Program at Morrisville State College for immediate testing.