Goliath Versus Davids In the Kentucky Oaks 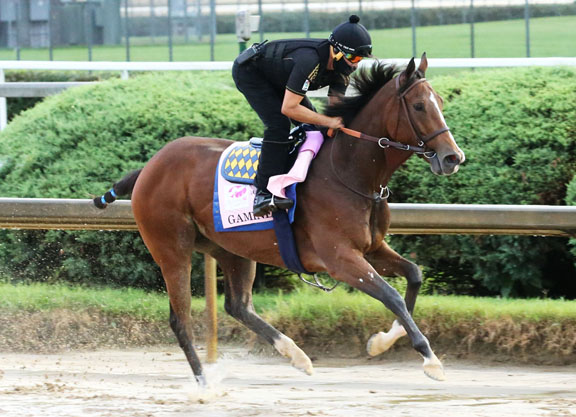 In this corner comes 'TDN Rising Star' Gamine (Into Mischief), a filly by one of the world's hottest and most fashionable sires who was purchased for a seven-figure price tag at public auction and has whitewashed Grade I rivals by a combined 25 3/4 lengths in her last two starts.

Sharing space in the other corner is Swiss Skydiver (Daredevil), a much more modest auction purchase, who is perfect in her last four against her own sex; and Speech (Mr Speaker), not quite as accomplished as her two chief rivals, but who should in no way be ignored in Friday's GI Longines Kentucky Oaks.

A $220,000 Keeneland September yearling purchase, Gamine fetched a record-breaking $1.8 million at last year's Fasig-Tipton Midlantic Sale and nothing has finished ahead of her in four career starts. Bar one start, none of her rivals has come close. A maiden winner at first asking by open lengths, she crossed the line a neck better than Speech in a first-level Oaklawn allowance in what is her lone two-turn start to date. Subsequently disqualified for a drug positive, she earned a 110 Beyer for an 18 3/4-length jaw-dropper in the GI Longines Acorn S. going Belmont's one-turn mile June 20 (by comparison, Tiz the Law was given a 100 for his Belmont score). Shortening up to seven furlongs for the GI Longines Test S., she set the pace from the fleet Venetian Harbor (Munnings) and ran away from her to hit the line seven lengths to the good.

The nine-furlong distance is the obvious question mark for Gamine heading into Friday, but if three-time Oaks-winning trainer Bob Baffert is feeling the pinch, he isn't exactly showing it.

'We know she's fast and she's done [two turns] before so it's not like it's new,” he said. “We're just blessed we have a filly like this. We gave a lot of money for her and it's worked out. A lot of times you do that and they don't work out. We're just enjoying her.”

Gamine is expected to be the speed of the Oaks, but Tyler Gaffalione should have Swiss Skydiver within shouting distance from the start. The $35,000 long-time Ken McPeek client Peter Callahan invested in the chestnut at Keeneland September two falls ago has proven to be money very well spent. While the margins of her victories have been less imposing than those posted by Gamine, the performances have been no less dominating.

The victims look the same–she defeated Venetian Harbor in a highly rated renewal of Oaklawn's GIII Fantasy S. in May, then ventured to Speech's home turf and took down her colors in the GII Santa Anita Oaks the following month. Hardly disgraced when second to Art Collector (Bernardini) in an audacious attempt at the GII Toyota Blue Grass S. July 11, she thrashed her rivals in the GI Alabama S. when last spotted Aug. 15. McPeek is looking forward to the challenge directly ahead.

“We ran on the same racetrack that weekend at Oaklawn and I don't think there's a lot separating them,” he said. “It's going to be fun to watch. That's what makes me confident. [Bob Baffert's] filly is going to have to do something she hasn't experienced and it's something we've done over and over all year.”

Speech figures to sit a good trip in the Oaks, tracking the top two. The Florida-bred earned a richly deserved Grade I last time out in Keeneland's Ashland S. July 11, earning a figure competitive with what Gamine and Swiss Skydiver have put up going two turns. A $65,000 short yearling at the 2018 OBS Winter Mixed Sale, Speech was bought back on a bid of $95,000 at Fasig-Tipton July that summer and fetched $190,000 at OBS March 18 months ago.

'TDN Rising Star' Donna Veloce (Uncle Mo) was just touched off as the favorite in the GI Breeders' Cup Juvenile Fillies in just her second career start and makes his first start since soundly defeating Speech in the GIII Santa Ysabel S. at Santa Anita Mar. 8.

It seems only fitting that in the town the late Muhammad Ali called home, a true heavyweight battle looms in the minutes just prior to 6 p.m. Friday afternoon.