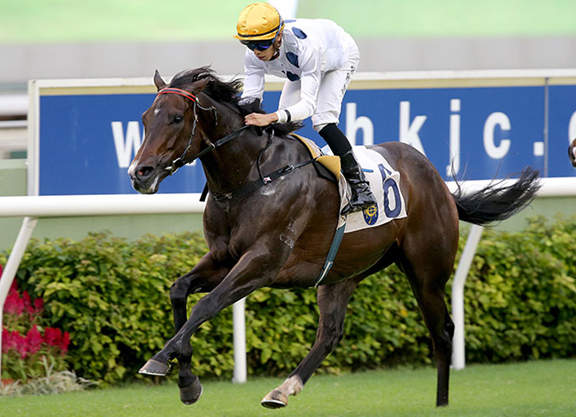 Sunday’s G3 Celebration Cup H. was billed as something of a David versus Goliath matchup between Classic series sweeper Golden Sixty (Aus) (Medaglia d’Oro) and multiple Hong Kong Horse of the Year Beauty Generation (NZ) (Road to Rock {Aus}). But, in receipt of a whopping 17 pounds from the 8-year-old, Golden Sixty–having his first start since winning the BMW Hong Kong Derby (2000m) in March–kicked in with what has become his trademark finishing speed to post a facile success, as Beauty Generation and Champion’s Way (Aus) (Hinchinbrook {Aus}) hit the line in unison to share second.

Settled worse than midfield behind a moderate tempo, Golden Sixty was patiently handled on the turn, but was eased out into the clear with a bit more than 400 metres to race. Champion’s Way, who sat a nice inside trip for Joao Moreira, was sent into the lead in upper stretch, but Golden Sixty’s turn of foot proved decisive, as he rolled past an on to a convincing victory. Beauty Generation also traveled inside and was short of room at the furlong marker, but boxed on gamely to earn the dead-heat for second.

“It’s very exciting to be back on him [Golden Sixty], he felt great and fresh today–once I got a clear run I knew he’d run them down,” winning jockey Vincent Ho said. “I think he is one of the best horses in Hong Kong at the moment.”

David Hayes, who has taken over the training of Beauty Generation with the departure of John Moore, was pleased enough with what he saw on the track.

“We knew it was always going to be a big ask to give a young champion like Golden Sixty so much weight, but I thought Beauty Generation would have finished a clear second with a better run and I’m very happy with the way he went,” Hayes said.

Golden Sixty is bred on the cross of Medaglia d’Oro over sire sons of Forty Niner which has yielded the likes of US Horse of the Year Rachel Alexandra (out of a daughter of Roar), champion Songbird and other 10-furlong Grade I winners Elate and New Money Honey (each o/o a Distorted Humor dam). His deeper female family includes the likes of champions Bosra Sham and Hector Protector and MG1/GISW Ciro.

Gaudeamus is the dam of a 3-year-old colt by Choisir (Aus), and a yearling filly by G1 Golden Slipper S. winner Capitalist (Aus) (Written Tycoon {Aus}). She was most recently bred to Trapeze Artist (Aus) (Snitzel {Aus}) on a Nov. 18 cover date.