Golden Sixty Back To Work at Sha Tin 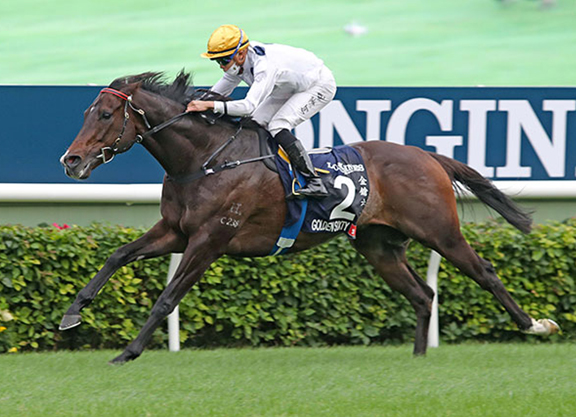 Exiting an imperious victory in the G1 Longines Hong Kong Mile Dec. 13, Golden Sixty (Aus) (Medaglia d'Oro) goes in search of his 12th consecutive victory and 15th from 16 starts overall when he takes on a field of mostly familiar faces in Sunday's G1 Stewards' Cup at Sha Tin Racecourse.

Winner of seven straight during the 2019/2020 season, including a sweep of the 4-year-old Classics, the Queensland-bred gelding has yet to be tested in four runs this term and his Hong Kong Mile success came at the expense of the re-opposing Southern Legend (Aus) (Not A Single Doubt {Aus}) and the race's defending champion Admire Mars (Jpn) (Daiwa Major {Jpn}). It's all systems go for Golden Sixty, who figures to jump as a money-back proposition.

“He was a bit keen when he started back (after being freshened up), but after that he had a grass gallop (Jan. 19)–he was fine and [Friday morning] he was good again,” trainer Francis Lui, who celebrated his 62nd birthday earlier in the week, told the HKJC notes team. “I asked [jockey] Vincent [Ho] to give him an easy gallop and he just wanted to go.”

On the comeback trail is Rise High (Fr) (Myboycharlie {Ire}), a close third to Win Bright (Jpn) (Stay Gold {Jpn}) in the 2019 G1 Longines Hong Kong Cup (2000m), but unraced since. Sunday's trip is well short of his best, but Caspar Fownes, who will also saddle Southern Legend, is looking for a tightener into the Feb. 21 G1 City Hong Kong Gold Cup, where he is likely to see Golden Sixty again, only on a more level playing field.

“Obviously, you're up against a champion, a superstar in Golden Sixty, but as long as we can just run a nice race first-up, then we'll head to the Hong Kong Gold Cup with him,” Fownes said.

Hot King Prawn (Aus) (Denman {Aus}) is likely to go favoured in Sunday's other top-level event, the Centenary Sprint Cup over 1200 metres. The likeable gray won the G2 Jockey Club Sprint in November and was the $21 (11-10) chalk on international day, but could do no better than seventh behind Danon Smash (Jpn) (Lord Kanaloa {Jpn}), as the ageless Jolly Banner (Aus) (Lonhro {Aus}) charged home for second at better than 80-1. Wishful Thinker (Aus) (I Am Invincible {Aus}) also ran with credit in the Sprint, rallying from last to finish fourth, beaten 0.75l at boxcar odds.