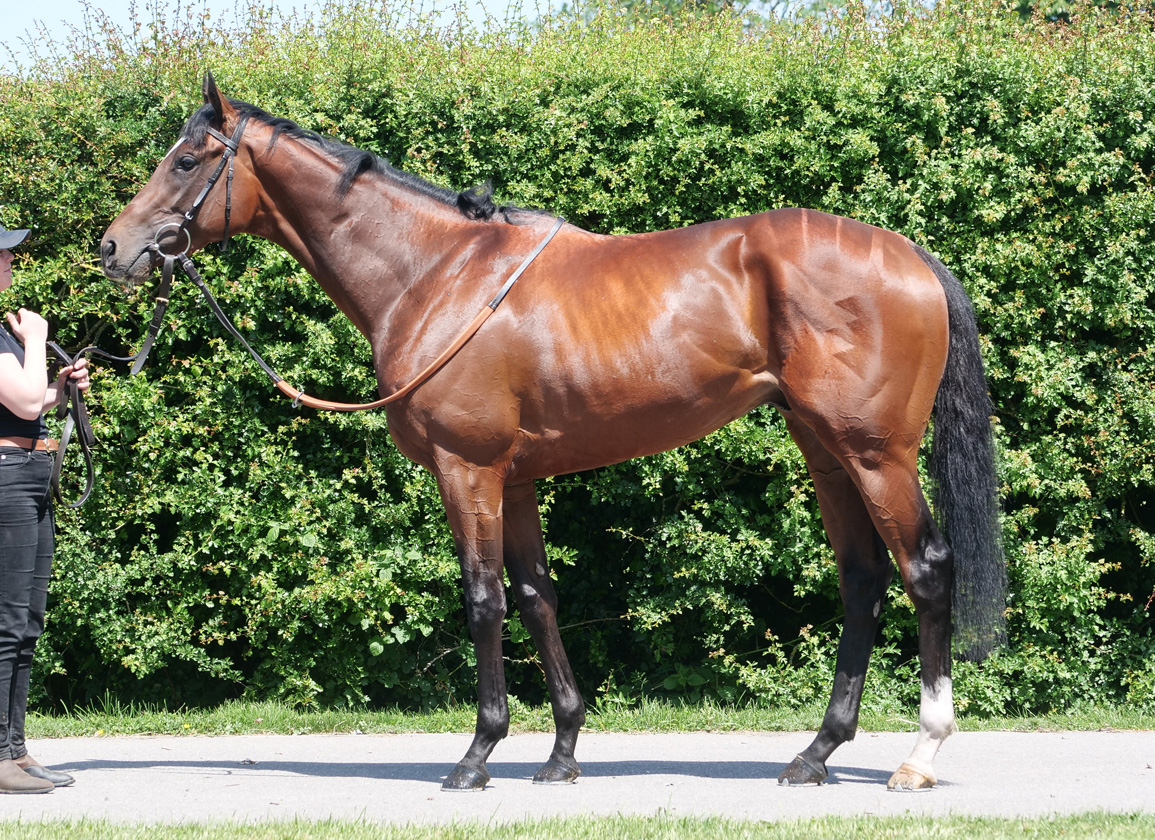 LONDON, UK–There has been an awful lot of water under the bridge since Goffs UK last convened its London Sale in the royal parks, but somehow the bloodstock market has meanwhile stayed buoyantly afloat. In this country, demand for horses in training has remained a priceless lifeline, and the additional kudos of a Royal Ascot entry for the majority of lots elevated the bidding along with the thermometer as summer made a timely arrival in Kensington Palace Gardens.

That proved equally true among those defending reserves and those managing to overcome them, who were split 50-50 through two dozen lots. It was striking, however, that the biggest investments of the evening were both animated by agendas extending far beyond what may or may not be achieved down the road this week.

These were headed by the Australian partnership that responded to an extraordinary opportunity in G1 Derby runner-up Hoo Ya Mal (GB) (Territories {Ire}) [6] with a no less extraordinary opening bid of £1 million.

That was enough to cause a prolonged silence, if not among those present principally to sip cocktails or admire couture, then certainly among anyone else contemplating a bid. Eventually some resistance was mustered, actually by telephone from California, but the authors of this bold strategy–namely Gai Waterhouse and Adrian Bott, and clients Go Bloodstock–soon won the day at £1.2 million, the docket signed by their longstanding local agent Johnny McKeever. The underbidder turned out to be Marie Yoshida of Asian Bloodstock Services, on the line to Nick Nugent from Los Angeles.

Of the various plaudits to be shared for this coup, top billing must go to that remarkable judge Federico Barberini, who has found so many bargains in the past and discovered this one in no less a catalogue than Tattersalls October Book 1 for just 40,000gns. His client Ahmad Al Shaikh sent the horse to Kingsclere, where he had made nice progress through three juvenile starts and then a couple of the spring trials at    Newmarket, while still seeming a tier down from the elite of the crop. Hence his starting price of 150-1 at Epsom, but he outran those odds in startling fashion–and connections opted to strike while the iron was hot.

“You rarely get the chance to purchase horses of this calibre,” Bott explained afterwards. “He has a profile we think we will really suit Australia, with the Melbourne Cup obviously high up the agenda. As you know, the industry in Australia seems vibrant and healthy, so we want to try to capitalise on that, there's some great prizemoney around and he's a horse that can race at the level we want to be.

“He was on the radar when he was entered for the sale, so did a bit of homework prior to the Derby. Obviously his run there confirmed what we were thinking, and that's what you want with a lightly raced horse: continued improvement every time he's stepped out.”

As for detonating the bidding with a seven-figure opening salvo, Bott said with a shrug: “Look, you know where a horse like this is going to fit in the market and we just thought you should show your intentions at what was a fair price. Prices are dictated by their recent form and obviously not many horses at that level come onto the market too often, so you're not paying these amounts too often, either. So it's all relative. A horse like this, coming down to Australia, is hard to get hold of, so we knew we had to be strong. We've had to pay was obviously what fair amount, but we're excited to get him down there and see what he can do for us.”

His purchasers will now consult Andrew Balding about his two entries later in the week, respectively in the G3 Hampton Court S. on Thursday and the G2 King Edward VII S. the next day.

“We'll have a discussion with Andrew and see how he feels about how the horse has done after that run in the Derby,” Bott said. “First and foremost, we want to do the right thing by the horse, though obviously it would be a huge attraction for the new connections to have an Ascot runner.”

The Force Is with O'Callaghan

In contrast to Balding, who must soon bid farewell to one of his rising stars, Michael O'Callaghan found himself in a “win-win” situation after Crypto Force (GB) (Time Test {GB}) [24] became the latest and perhaps most remarkable vindication for his business model of targeting the breeze-ups as a platform for resale.

It was less than two months ago that the Curragh trainer gave 160,000gns for this colt at the Tattersalls Guineas Breeze-Up, from the Tally-Ho consignment that had such a fine run in that sector this spring. O'Callaghan launched Crypto Force in a maiden at his home track 13 days before the sale and, while the odds-on favourite from Ballydoyle did not have the best of runs in second, that does alter the acceleration he showed to win unthreatened.

If he takes up his engagement in the Listed Chesham S. on Saturday, Crypto Force will do so in the cause of Kia Joorabchian, agent Hamish Macauley having signed a 900,000gns docket in the names of Omnihorse/Amo Racing.

“We don't have too many of that type,” explained Joorabchian, who confirmed the colt will stay in the yard. “He could potentially be a Derby horses next year. Potentially. He showed that he stays [seven furlongs] well, and now that I'm racing in Ireland I know how very, very tough the competition is there. I appreciate how hard it is to win a maiden like that. He finished very strong and he has a very strong pedigree. We came here to buy him–and we got him.”

The colt is out of a young Galileo (Ire) mare while his third dam is a stakes-winning half-sister to Pilsudski (Ire), a painful Royal Ascot memory for some of us. He somehow finished 17th off a mark of 82 in the King George V H. at Royal Ascot in 1995, before proceeding to win six Group 1s and twice finishing runner-up in the Arc!

Harry Time won on debut at Navan and holds an entry in the G2 Coventry S. on Tuesday. David Meah explained that this was a return to the same well that produced G1 Commonwealth Cup fancy Twilight Jet (Ire) (Twlight Son {GB}) as an investment for Michael and Julia Iavarone.

“We bought into Twilight Jet before his run at the Breeders' Cup Our relationship with Michael has grown and grown,” the agent said. “And win or lose, they've all flown over from America and we're going to have a great week: we're all here to have fun.”

There were a series of cracking “racetrack pinhooks” among those that did meet their reserves. The 4-year-old Cadillac (Ire) (Lope De Vega {Ire}), for instance, cost BBA Ireland €40,000 as an Orby yearling but then won his debut for Jessica Harrington by nine lengths and won a Group 2 as a juvenile. He confirmed his continued potency when winning a Listed race earlier in the month and duly figures among the leading fancies for the Listed Wolferton S. on Tuesday's opening card–after which he will transfer to Kevin Philippart de Foy, whose client Sheikh Abdullah Almalek Alsabah stretched to £500,000 for Lot 20.

“Yes, he'll be coming to me at the end of the week,” his new trainer confirmed happily. “Sheikh Abdullah has been a great supporter of the yard over the last year and has Juan De Montalban (Ire) (Lope De Vega {Ire}) running in the last race tomorrow. We've followed this horse all the way through: he has shown excellent form on good ground, probably doesn't want it too soft, and could possibly be one to go to the Middle East next winter.”

Cresta (Fr) (New Bay {GB}) was another bargain sold by this auction house, found at their Premier Sale at Doncaster in 2020 by Dermot Farrington for only £21,000. Martyn and Freddy Meade have advanced his rating to 104 in just five starts, via placings in the G3 Horris Hill S. and Listed Dee S., and that forced Will Douglass of Charlie Gordon-Watson Bloodstock to £490,000 for Lot 23.

“He was purchased for Mohamed bin Hamad Al Attiyah,” said Douglass. “He will be exported to Qatar but will run at Royal Ascot [G3 Hampton Court S., Thursday] and perhaps once more before leaving. He's a progressive horse with a nice profile and by a sire that's on an upward curve.”

“He wasn't the biggest, but we just loved the way he moved,” recalled Meade Sr. of the young Cresta. “You've seen he has a lot of ability but I think he still has a lot of potential.”

There was no disguising the bittersweetness for Heather Main, either, after Ileach Mathan (Ire) (Kodi Bear {Ire}) catapulted his £25,000 value as an Orby yearling to £340,000 for Hong Kong clients of Richard Ryan as Lot 7. The gelding has even fewer miles on the clock, having won at Kempton on debut last autumn and then finished second on his Newbury reappearance.

“I just had to have him,” Main recalled. “He just had the deepest girth. They started calling me immediately after he ran at Newbury and I didn't want to sell, the owners didn't want to sell, but here we are. We had no choice, but it's sad to see him go. He's got a lovely temperament, he's a complete gentleman, lazy at home. He'll do very well out there, I'm sure.”

There is limited point in comparisons, with a boutique horses-in-training catalogue like this, though Goffs UK chairman and Group Chief Executive Henry Beeby naturally noted that business stacked up very well–turnover up 42 percent, average up 18 percent, and median down nine percent–compared with the last auction staged in the royal parks before derailment of the most sociable week of the British Turf.

“We're delighted to be back, after everything everyone has had to endure during the two-year hiatus, and we're absolutely delighted with the results,” Beeby said. “The team has put in a huge effort to bring this sale back to Kensington Palace Gardens, and to bring some wonderful horses to the catalogue. To get a Derby second was a once-in-a-lifetime opportunity, and he made a fitting price.

“The sale has come back in style, and we're extremely grateful to the vendors–not least of the top lot, who could probably have sold many times over before the sale. Fair play to the underbidders as well, it was obviously quite an operation, with one line from L.A. to Nick here and another line apparently open to a client in New York.”

Though half the offerings did not sell, the timing of this sale has always allowed vendors to make a bet to nothing.

“At a normal sale, a 50 percent clearance rate would obviously be very disappointing,” Beeby remarked. “But what we always say to vendors is that you might get premium, with Ascot—and if you don't, well, don't sell! Just have a shot. Some people are just as happy not to sell. We're very grateful to them all, to all our partners as well, and thankfully the weather also played its part. It was a joyful occasion.”