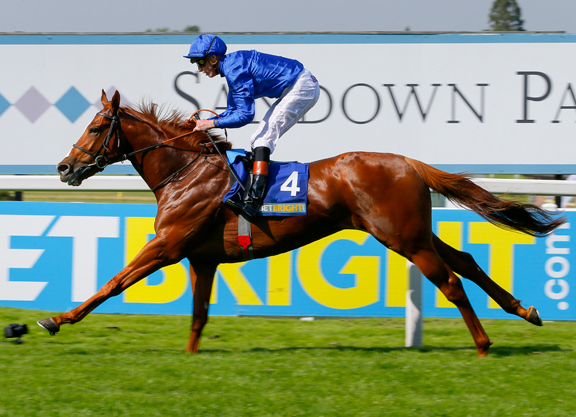 2018 G1 Investec Derby scorer Masar (Ire) (New Approach {Ire}-Khawlah {Ire}, by Cape Cross {Ire}) has been retired, Godolphin announced on their website Tuesday. The Charlie Appleby trainee was off the mark at Goodwood in May of his juvenile year, and captured the G3 Solario S. just two starts later at Sandown that September. Third in the G1 Prix Jean-Luc Lagardere switched to Chantilly a month later, the Darley homebred ran a credible sixth in the GI Breeders' Cup Juvenile Turf at Del Mar Stateside and was put away for the winter. As a sophomore, the son of UAE highweight and MGSW Khawlah won the G3 Craven S. second up last spring, and earned a Classic placing when third in the May 5 G1 QIPCO 2000 Guineas prior to his Epsom tally. Injured after the Derby and given time off, he stumbled at the start of the G2 Hardwicke S. to be fifth this June. The 'TDN Rising Star' was unplaced in the G2 Princess Of Wales's S. at Newmarket on July 11. He retires with a mark of 11-4-0-3 and earnings of $1,375,811.

“Masar gave us a wonderful day at Epsom last year when he beat Roaring Lion to become the first Derby winner in the Godolphin blue,” said Appleby. “He has come out of his last race in good order, but we feel he owes us nothing and the time is right to retire him from racing. He will be missed by all the team at Moulton Paddocks and I am sure he will be a great addition to the Darley stallion roster.”

Stud plans for the 4-year-old, who counts the Arc-winning blue hen Urban Sea (Miswaki) as his fourth dam, are being finalised.