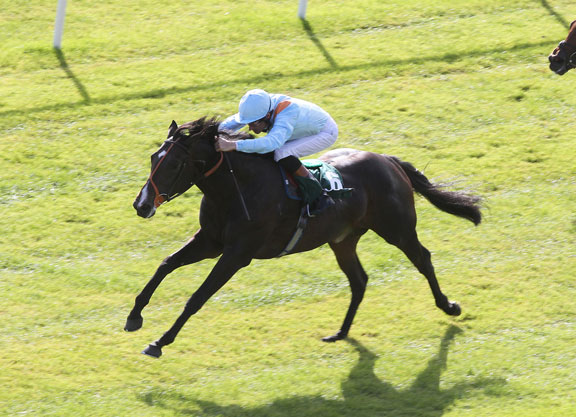 Middleham Park Racing have sold one of their major flag bearers Toormore (Ire) (Arakan) to Godolphin. The 4-year-old will carry the Godolphin blue silks for the remainder of his racing career before taking up stallion duties at either Kildangan or Dalham Hall Stud. A Group 1 winning 2-year-old when claiming the National S. at The Curragh, Toormore has regained his form this year after some lackluster displays last season. He was recently seen finishing fourth behind Solow (GB) (Singspiel {Ire}) in the G1 Queen Anne S. at Royal Ascot having previously chased home his stablemate Night Of Thunder (Ire) {Dubawi {Ire}) in the G1 Lockinge S. at Newbury. Speaking about the deal Middleham Park racing manager Tim Palin said, “Darley have been interested in Toormore for a while now and we have decided the time is right to let him go. He will stay in training with Richard Hannon and race on for Godolphin for the foreseeable future before retiring to stud, whenever that might be.” Reflecting on his racing career to date and what it meant to the thriving club Palin commented, “Toormore was champion 2-year-old in 2013 and catapulted Middleham Park into a different stratosphere, so we will always be grateful to him, Richard Hannon and Richard Hughes.” Palin added, “We are hugely grateful to Sheikh Mohammed. It is a privilege to be dealing with an operation like Godolphin and the fact that he is going to some the best people around and will have the chance to become the best possible stallion he can be was the linchpin to the deal.” Toormore was bred by Jimmy Murphy of Redpender Stud in Ireland who sold him as a yearling to Peter & Ross Doyle at Doncaster for 36,000. He is out of the unraced Danetime (Ire) mare Danetime Out (Ire) and is a half brother to the dual Group 2 winner Estidhkaar (Ire) (Dark Angel {Ire}).