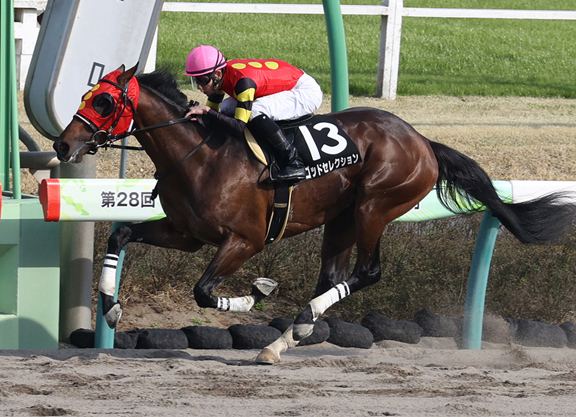 Prominent every step of the 1800-meter journey despite a somewhat awkward draw, God Selection (Jpn) (Novellist {Ire}) took command in the straight and drew clear to win Saturday's Fukuryu S. (allowance) at Nakayama, earning 40 points on the Japan Road to the Kentucky Derby in the process.

Ridden for speed from the 13 hole in a field of 14, God Selection was down into the two path and prompted the pace from second as Lord Strom (Jpn) (Makfi {GB}) galloped them along. Ridden cold on the turn and into the final quarter-mile, God Selection put a couple of lengths on his rivals when asked to sprint in upper stretch and proved easily best, as market leaders Meisho Murakaumo (Jpn) (Neo Universe {Jpn}) and favored Gold Higher (Jpn) (Henny Hughes) ran on for minor prizes.

The victory earns the connections of God Selection a guaranteed berth in the May 1 Kentucky Derby, but he was not an original nominee to the Triple Crown and would need to be supplemented. Should they decline the invitation, the offer would be extended, in order, to the connections of the three next-highest points-getters. Currently second on 30 points is La Perouse (Jpn) (Pelusa {Jpn}), who was among the early entries for the Triple Crown.