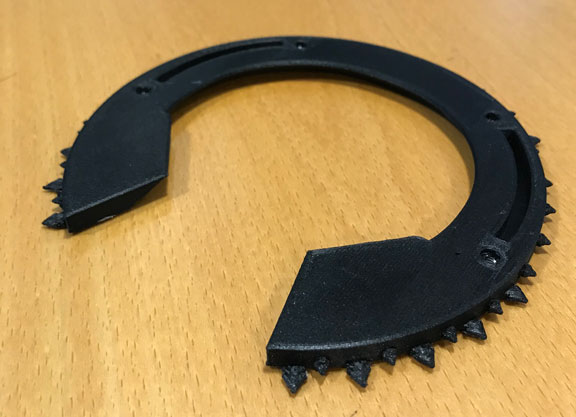 Carbon interface for a horse shoe

Some great leaders around the world are consistently embracing innovation and new technologies to lead the industry forward. As Godolphin Flying Start trainees, we are lucky enough to learn about those innovations through lectures and presentations, when passionate people are more than happy to share with us what they have been working on.

From veterinary school in Dublin, farriery school in Kentucky to horse conformation assessment in every country we have been to, Thoroughbred anatomy and care is a substantial module of the course.

While we were in Dubai from January to March 2020, we were once again the witnesses of innovation, with an introduction to hoof cast and 3D printing made by Derek Poupard and Declan Cronin.

Godolphin farrier Poupard has been shoeing horses since 1982 and trimming horses since 1977 and has shod horses on four continents including winners of the most renowned races. While assisting leading trainer Charlie Appleby in hoof care, the strategy of Derek Poupard is to make the foot as natural as possible, with horses being trained barefoot, wearing shoes only on race days.

To avoid damage caused by nailing shoes to thin hoof walls and to help compromised feet, Derek uses hoof cast, a product that adds strength and depth to the hoof wall whilst dissipating force and providing protection to the solar surface of the hoof. Hoof cast is similar to the products used on broken limbs, but is stronger and can withstand exposure to water. The hoof is dressed lightly and glue is applied, paying particular attention to the anchor points at the heels. Hoof cast is easily unrolled and wrapped around the hoof, doubling back at the quarters to create width to the heels without lengthening the toe. The cast is set with the use of water and air. The application of a hoof cast can be adapted for use in a number of situations including with pads and to stabilise hoof wall cracks and fractures.

While a shoe can be nailed to the hoof cast as normal (with no need to undercut clenches as the nails are easily embedded in to the cast wall), Derek has developed a cast-on carbon fibre interface to which an aluminium shoe can be screwed, meaning a change of shoes in few seconds and no need of nails. This latest invention was possible thanks to 3D printing technology.

Equiped with a small 3D printing machine and an iPad on which the interface is designed, Derek is printing a flexible interface of carbon fibre (made of 400 layers), which is used as a template base for a shoe to be screwed onto without nails. To attach the carbon fibre plate to the foot, Derek uses a cast. The barbs around the edge of the interface will keep the shoe on. The interface is therefore placed between the hoof and the shoe, and the shoe is fixed with screws instead of traditional, potentially damaging nails.

Dereck's latest invention is a combination of many years of work and reflection to improve hoof care and shoeing. With this new concept, numerous top-class horses have been able to succeed at the highest level of competition; horses that, often, would not have been able to perform because of compromised or fragile feet and lameness. The possibilities of 3D printing are unlimited; this technology could be adapted to the breeding area, to improve foals' conformation faults with custom-made extensions for crooked leg foals, or to do something for flexor tendons.

It is probably going to take a little while for this new technique to be adopted by the majority but it is an innovation that is going to change the future of farriery and horseshoeing.