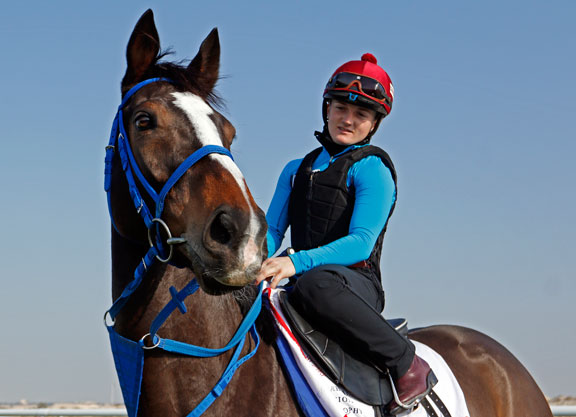 The second running of the £500,000 Bahrain International Trophy on Friday has drawn a competitive international lineup, with little separating the leading fancies in the betting. Each of the 14 runners, including five Group 1 winners, has of course been meticulously primed for a run at this sizable pot, but that statement perhaps applies to Global Giant (GB) (Shamardal) more than any other. The international favourite has had this race as his primary target since being bought privately from Ed Dunlop's yard last year by Shaikh Isa bin Salman Al Khalifa, one of the key organizers of the race. The 5-year-old entire has won two of his four starts since being transferred to John Gosden, including Newbury's Listed Steventon S. over this trip on July 19. Though he was not disgraced when third in the G3 Rose of Lancaster S. on Aug. 8 under Frankie Dettori, assistant trainer Thady Gosden said the horse encountered unsuitably soft ground on that occasion.

“Ideally we'd have had a prep race before this but the ground went at the end of the season so we thought the best thing to do was to leave him and bring him here fresh,” Gosden said. “His work here has been good. The turf track here is world class and he's enjoyed the faster ground. We are drawn five which we are happy about. They say the inside of the track is where you want to be. It would be wonderful to win the race for His Highness Shaikh Isa; this race was his brainchild so it would mean a lot to him.”

Speaking of global giants, the Japanese expatriat turned Newmarket resident Deirdre (Jpn) (Harbinger {GB}) makes the final start of a career that has seen her win the G1 Shuka Sho and G1 Nassau S. The 6-year-old has not visited the winner's enclosure since the Nassau last August and was most recently eighth in the G1 Prix de l'Arc de Triomphe, but assistant trainer Yoshi Hasida said he thinks conditions at Sakhir will suit her. She gets a five-pound weight break from her male rivals.

“Her condition going into the Arc was perfect, but the heavy ground went against her,” Hashida said. “The French horses coped with it better. Her two Group 1 wins came on right-handed tracks at Kyoto and Goodwood. The long straight at Sakhir will suit her. The track looks very fair and we like the firm ground that we will get. We are very excited to take part in the race.”

Aidan O'Brien's 2019 G1 Irish Derby winner Sovereign (Ire) (Galileo {Ire}) reappears off a fifth-place finish in the G2 Long Distance Cup on British Champions Day on Oct. 17 over heavy ground. He reverts to 2000 metres for the first time since last spring and looks for his first win since the Irish Derby.

“I don't think he ran too bad at Ascot, he just got tired late on,” said O'Brien. “He seems in good form since and he should like the ground. This is 10 furlongs so we'll find out a lot; he's in good order. He's going there quite a fresh horse and he's lightly raced. It looks a very good track and everyone is very positive about it.”

The Oct. 10 G3 Darley S. one-two Lady Wannabe (Ire) (Camelot {GB}) and Dream Castle (GB) (Frankel {GB}) re-oppose here. The former put in a career-best effort last out to overhaul the Dubai Group 1 winner Dream Castle, who was returning off a two-month break having won a mile conditions race at Thirsk on Aug. 9 but gets a less favourable draw in 13.

Others of interest include last year's G1 Queen Anne S. winner Lord Glitters (Fr) (Whipper), who has put in some respectable efforts this term despite being plagued by soft ground on a number of occasions; and the locally trained Port Lions (Ire) (Kodiac {GB}), who rides a seven-race win streak and upset Deirdre in the Mohamed Yousuf Naghi Motors Cup in Saudi Arabia in February but hasn't run since. 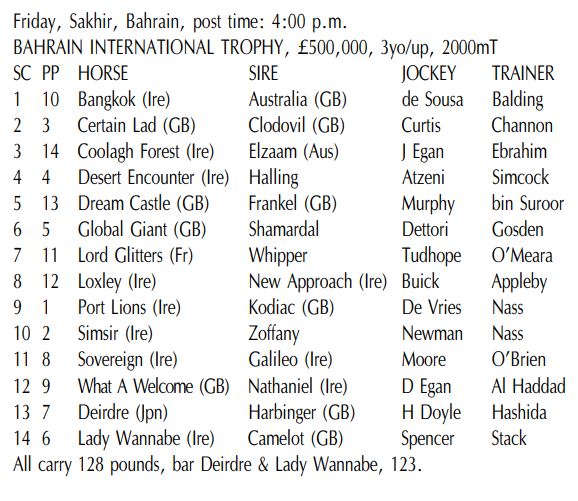