Gladiator King on the Road Again 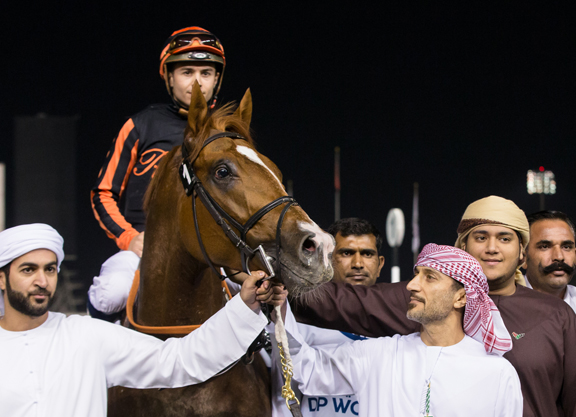 “Gladiator King arrived to us in July,” Seemar, who will also send out Saudi Cup contender North America (GB) (Dubawi {Ire}), said. “Our plan was to start him in the Dubai World Cup Carnival where he got off the mark winning the Jan. 2 G3 Dubawi S. and he remained unbeaten in his next race four weeks later in the G3 Al Shindagha Sprint–both at Meydan Racecourse.”

Gladiator King was making his first start in nine months when he went postward as a 10-1 outsider in the six-furlong Dubawi S. and he gutted out a neck victory over Ibn Malik (Ire) (Raven's Pass) (ERA video).

“After his first race we were on the fence about his abilities as he doesn't show much at home,” Seemar admitted. “We thought it might have just been beginner's luck.”

The trainer was more impressed by his charge's second outing in Dubai where the chestnut colt wore down the Doug O'Neill-trained Truck Salesman (Can the Man) to win by a length (video).

“After he won the Al Shindagha Sprint, we saw what he is capable of,” Seemar said. “It is very rare to see sprinters quicken up and change gears from the front like he does. And the feedback from [jockey] Mickael Barzalona was very positive.”

“He has been shaping up really well and we are confident,” Seemar said. “I do feel that we have an edge against the other competitors as our journey is only a two-hour flight to Riyadh, this gives us an advantage as our horses won't need time to recover after a long journey.”

As head trainer at Zabeel Racing Stables, Seemar oversees some 130 horses in training. A native of India, his route to Dubai took him through the United States where he worked with horseman Monty Roberts and served as a farm manager at Taylor Made Farms. He was recruited by Sheikh Mohammed in 1990 and was part of a team tasked with putting Dubai on the international racing scene.

Based in Dubai since the nascent days of the Dubai World Cup, Seemar has a unique perspective as Riyadh's King Abdulaziz Racecourse welcomes a glittering array of international racing stars for its first Saudi Cup.

“As a horseman, training in Dubai for the last 30 years, it was music to my ears when I heard the announcement of the Saudi Cup,” Seemar said. “It is a huge compliment to racing in this part of the world. I hope other countries in the GCC can follow this as we can only progress and it is great to see horses from all over the globe congregating in the Middle East for events such as The Saudi Cup and Dubai World Cup.”

While he will be busy saddling runners at Meydan Thursday, Seemar is eagerly awaiting his first in-person look at King Abdulaziz Racecourse.

“I have not been to the track myself yet, but from what I have seen on TV and social media, it looks like a world-class facility and the organizing team seem to have done a great job,” Seemar said. “I will not be arriving in Saudi Arabia until the 28th as we have runners at Meydan on Thursday evening, but my assistant trainer Bhupat Seemar and the rest of the team from Zabeel will be there bright and early on the 26th.”