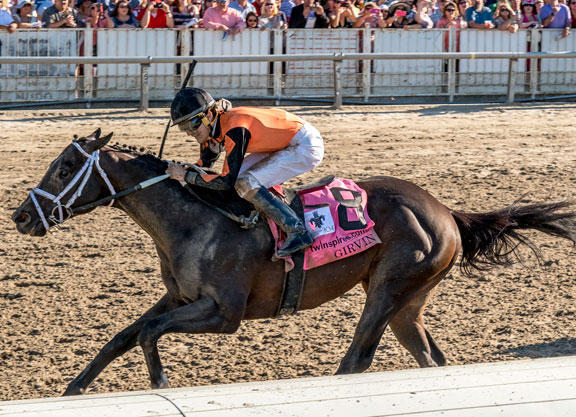 The sole Grade I winner in the field, Girvin (Tale of Ekati)-a come-from-behind winner in the July 30 Haskell Invitational at Monmouth-looks to rebound off an uninspiring 11th in Saratoga's GI Travers S. Aug. 26. Victorious in consecutive starts in the GII Risen Star and GII Louisiana Derby at Fair Grounds last spring, the Brad Grady runner failed to show up when 13th in the GI Kentucky Derby, but has registered two wins a nose second in a trio of starts at this distance and hopes to rebound here. Likely to show some early foot is Battle of Midway (Smart Strike), coming into this off an easy score in Del Mar's Shared Belief S. Aug. 26 following a sixth-place finish in the Haskell. Earlier this season, he was runner up in the GI Santa Anita Derby in April, returned with a third in the Kentucky Derby ahead of registering a wire-to-wire victory in Santa Anita's GIII Affirmed S. June 24. The consistent Colonelsdarktemper (Colonel John), who figures to be close up in the early going, has hit the board in seven of nine starts this term. Victorious in a Churchill allowance at seven furlongs May 29, he was runner up in both the GIII Matt Winn in June and GIII Indiana Derby the following month before scoring on the front end in the Aug. 5 GIII West Virginia Derby over nine furlongs. Last time out, he tired to third after setting the pace in the GIII Smarty Jones at Parx Sept. 4.