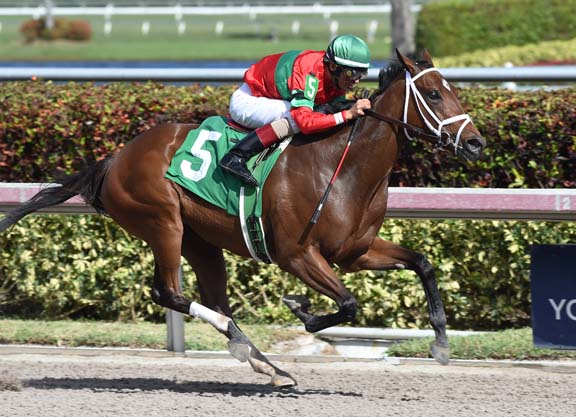 When Ghalia (Medaglia d'Oro) cruised home an easy winner of her debut at Gulfstream Park Sunday, the victory marked the latest in a long line of successes from the family for breeder Ed Seltzer.

“That mare has been very, very important to us,” Seltzer said of Ghalia's graded-stakes winning dam Verdana Bold (Rahy). “She is out of True Legacy (GB) (A.P. Indy) and before that was Harbour Club (Danzig) and Over Your Shoulder (Graustark). I go back five generations with that family. It's really special. I love her mother and she was meant to have a very nice horse every now and then, it just hasn't happened for one reason or another, but Verdana is lovely.”

“She was a good filly,” Seltzer said. “We really enjoyed her. We had her up in Canada and we're very happy with what she did. She had a couple of bad breaks, and you never know, but I think she might have been a little better then what she showed, but she was awfully good. I was very happy with her.”

Ghalia is Verdana Bold's fourth foal and recorded the mare's biggest sales success to date when selling for $600,000 at the 2014 Keeneland November sale.

“We foal-shared her, so we owned her with Darley as a weanling,” Seltzer recalled. “We put her in the sale and I was surprised they didn't buy her. But we were very happy with the result. Any time you can do that, especially when you need the money, it's great. So many times it doesn't work out the way you want it to.”

Seltzer admitted he didn't know what to expect of Ghalia going into Sunday's debut.

“We sold her and I didn't really have a lot of information on her,” he said. “I had heard she was working very well, but I didn't know beyond that. I kept looking for her all last year and she wasn't named, so it kind of made me nervous. I think pretty darn close to the end of last year, they hadn't named her yet. So when that happens, you kind of get scared.”

Seltzer and his wife maintain a broodmare band of about 20 head. The couple owns the 250-acre Solera Farm in Williston and the farm, which stands Seltzer's multiple graded stakes winner Field Commission, is managed by daughter Krista Seltzer.

“We're not in a position where we can run everything,” Seltzer, who has bred graded stakes winners Surgical Strike (Red Giant), Sky Treasure (Sky Mesa), Sparkling Review (Lemon Drop Kid) and Customer Base (Lemon Drop Kid), explained of his breeding operation. “We need to watch what we do. It's a passion, but at the same time we have to run it in a business-like way. We don't have the kind of money where we do what we want. So we sell and we foal-share and we try to do the best we can. We are not really opposed to keeping fillies if they are nice because you want something in the family.”

Verdana Bold produced a colt by Into Mischief last year and was bred back to that Spendthrift stallion, but she has an upcoming date with Ghalia's sire Medaglia d'Oro.

“Interestingly enough, we had to make a decision the other day because Medaglia d'Oro was filling up,” Seltzer said. “I hadn't heard enough [about Ghalia], but she had been so beautiful, so we are breeding her back to Medaglia on the 17th.”

“It's great when you win,” he said. “It's the kind of game where it doesn't always happen all that often.”