Ghaiyyath Back With a Bang at Meydan 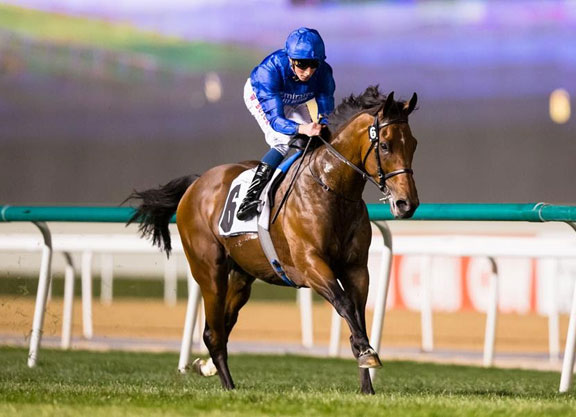 Ghaiyyath (Ire) (Dubawi {Ire}) had not been seen since beating just two home in the G1 Prix de l'Arc de Triomphe on Oct. 6, and upon return in Thursday's G3 Dubai Millennium S. going 2000 metres on the Meydan turf he looked much more like the horse that won the G1 Grosser Preis von Baden by 14 lengths last summer, blowing apart an overmatched field by 8 1/2 lengths.

An exciting proposition at two off the back of a five-length maiden win and a score in Newmarket's G3 Autumn S., Ghaiyyath was seen just once at three when winning ParisLongchamp's G3 Prix du Prince d'Orange by three lengths, and he at last got to put together a proper season last year at four. He kicked things off with a win in the G2 Prix d'Harcourt before finishing third behind Waldgeist (Ire) (Galileo {Ire}) in the G1 Prix Ganay, which was followed by his Grosser Preis von Baden tour de force. Ghaiyyath set the pace over the heavy going in the Arc but rapidly dropped out of contention down Longchamp's false straight. He threw himself into the reckoning for all the top middle-distance contests in 2020, however, with a smart return performance on Thursday.

Kept wide of his five rivals initially by William Buick, Ghaiyyath soon found himself cruising along six lengths in front under a snug hold while Saeed bin Suroor's Royal Meeting (Ire) (Invincible Spirit {Ire}) led Ghaiyyath's Charlie Appleby stablemate Spotify (Fr) (Redoute's Choice {Aus}), the winner of this race last year. Ghaiyyath simply asserted his dominance upon straightening and drew clear to win by a geared-down 8 1/2 lengths from Spotify in track-record time. Spotify had overtaken Royal Meeting at the quarter pole, with the Norwegian Derby winner Privilegiado (GB) (Sea the Moon {Ger}) making up ground from last to be third.

“I'm delighted,” said Appleby. “We've all seen what this horse can do. The reason we've come here instead of going down the classic Sheema Classic route of running in the [G2] Dubai City of Gold is that this gives us two more weeks.

“The plan was to just let him float into [the race] from his outside post and once he was on the lead, we would let him roll along. We've seen on numerous occasions what he can do when he's left to his own devices like that. Hopefully we can just freshen him up now and aim toward the Sheema Classic.”

Ghaiyyath, the highest-rated horse currently in training in Dubai at 126, is the product of a pair of Classic winners, as a son of Dubawi and the 2006 G1 Irish 1000 Guineas winner Nightime (Ire) (Galileo {Ire}). As accomplished as she was on the racecourse Nightime has outdone herself as a producer; Ghaiyyath is her second Group 1 winner, his three years older sister being the GI Man O'War S. winner Zhukova (Ire) (Fastnet Rock {Aus}). Godolphin purchased Ghaiyyath at Goffs November as a foal for €1.1-million and Zhukova at Tattersalls December two years later for 3.7-million gns, and Sheikh Mohammed can look forward to seeing Nightime's 2-year-old and yearling colts by Dubawi carry his colours; he bought them for 700,000gns and €1.2-million, respectively, as foals from the Weld family's Springbank Way Stud.