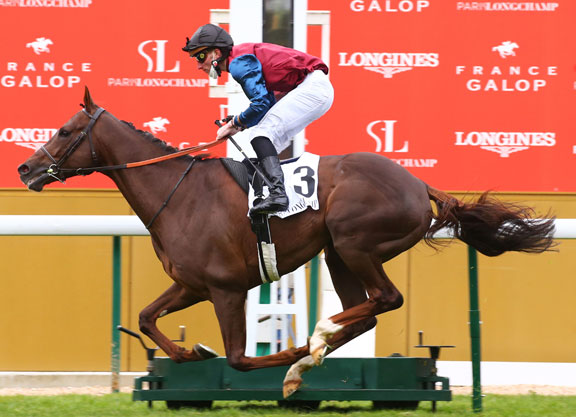 There was more Boudot magic at ParisLongchamp on Sunday as “PC” made all to draw the sting from all rivals and land the G1 Prix Ganay with the rapid improver Mare Australis (Ire) (Australia {GB}). Always highly-regarded and now an entirely different proposition from the greenhorn of last summer, Gestut Schlenderhan's homebred had offered a glimpse of what was to come when second on his return to Skalleti (Fr) (Kendargent {Fr}) in the 10-furlong G2 Prix d'Harcourt at this venue Apr. 11. Asked a new question by his rider on this sternest test of his ability so far, the 5-2 second favourite responded by stretching every rival including Mogul (GB) (Galileo {Ire}) who was in closest attendance. When he kicked in early straight, he turned the screw too tight on Ballydoyle's 9-5 market-leader raider and kept galloping true to the line to beat the emergent Gold Trip (Fr) (Outstrip {GB}) by 1 3/4 lengths. Providing Andre Fabre with a seventh renewal of this prestige event, he offered proof of his talent by gapping the eventual third Mogul by 3 1/2 lengths in total. “He's always been a nice horse, but he's needed a lot of time as he was very immature,” Fabre explained. “He's coming around now and had run a very good race in the Harcourt. He won really nicely today and I'll keep him in France and maybe go for the [G1] Grand Prix de Saint-Cloud. I don't know yet, but his target will be the Arc later in the season.”

One of a clutch of Schlenderhan horses sent to France at the end of 2019 along with the now-famous In Swoop (Ire) (Adlerflug {Ger}) and talented Alson (Ger) (Areion {Ger}), Mare Australis had beaten the subsequent group 2 winner Zamrud (Ger) (Samum {Ger}) on his sole start at two for the Jean-Pierre Carvalho stable at Munich. In deep on his debut for this stable when fourth behind the smart Port Guillaume (Fr) (Le Havre {Ire}), Gold Trip and Dawn Intello (Fr) (Intello {Ger}) in a 10 1/2-furlong conditions race at Saint-Cloud last May, he made heavy weather of winning the 12-furlong Listed Prix de l'Avre at Chantilly the following month. Not seen again until finishing second to the Irish revelation Baron Samedi (GB) (Harbour Watch {Ire}) in the G2 Prix du Conseil de Paris over 11 furlongs here in October, the bay was no match for the still-underestimated Skalleti in the Prix d'Harcourt but again demonstrated that he finds plenty for pressure. With Fabre having worked the oracle in the interim, he looked a ready-made Arc challenger here after that fine-tuning process. The solid marker Gold Trip was just over two lengths behind Sottsass (Fr) (Siyouni {Fr}) in the autumn showpiece, so Mare Australis is already comfortably in the vicinity when it comes to that target.