Gamine Turns Back for Test 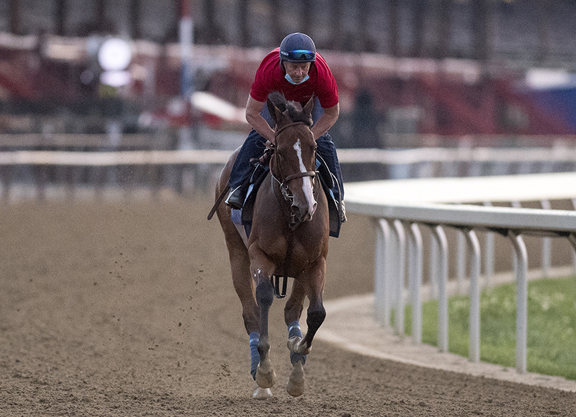 You’d be hard-pressed to find a performance by a 3-year-old filly in the past decade as jaw-dropping as what Michael Lund Peterson’s Gamine (Into Mischief) produced in the GI Longines Acorn S. June 20 at Belmont. Considered the current top dog of a loaded sophomore filly division in advance of the Sept. 4 GI Kentucky Oaks off that effort, the

‘TDN Rising Star’< will turn back to a sprint as a prohibitive favorite in Saturday's GI Longines Test S. at Saratoga.

Having lofty expectations attached to her ever since she topped the 2019 Fasig-Tipton Midlantic Sale for $1.8 million, the bay didn’t make it to the races a a juvenile, but dominated by 6 1/4 lengths as a 1-10 favorite in her much-anticipated unveiling Mar. 7 at Santa Anita. Shipped and stretched out to two turns in an Oaklawn allowance May 2, she gamely fought off Speech (Mr Speaker), who returned two starts later to score convincingly in the GI Central Bank Ashland S.

Gamine was later disqualified from that victory, however, for a lidocaine positive, with the ruling coming after she decimated six rivals with an 18 3/4-length romp in the Acorn. The effort earned a 110 Beyer, tied for the second-highest figure earned by any horse thus far in 2020.

“She looks great. We’re keeping her one turn,” trainer Bob Baffert told the NYRA notes team. “I would have liked to stretch her out one more time, the timing wasn’t just right for it, but she’s doing really well. She’s a really exciting filly, so hopefully she runs as well as in the past and then we can run her in the Kentucky Oaks.”

The clear second choice on the morning line, Venetian Harbor (Munnigs), turns back as well after a pair of odds-on defeats going two turns. A dominant second-out graduate Dec. 29 at Santa Anita, the $110,000 Keeneland September grad repeated in comfortable fashion in the GII Las Virgenes S. there Feb. 8 before running second to Swiss Skydiver (Daredevil) in the GIII Fantasy S. May 1 at Oaklawn and to Speech in the Ashland.

“At some point, she could get the [route] distance with the right scenario,” said Aimee Dollase, assistant to trainer Richard Baltas. “She trained well into those races. She set a quick pace in the Fantasy but the other filly, Swiss Skydiver, is obviously a very good filly and she just ran her down in the last part. She ran a big race in the Ashland, as well. She set a nice pace but Speech is coming into her own. She’s been beaten by two very good fillies going long, which is probably more what those fillies wanted to do, so we’ll see how she runs here with a cutback in distance.”

Alex and JoAnn Lieblong’s Wicked Whisper (Liam’s Map) looks to get back to her top form. Named a ‘Rising Star’off a 6 1/4-length debut victory here last August, the chestnut doubled up in the GI Frizette S., but retreated to finish a well-beaten fifth in the GI Breeders’ Cup Juvenile Fillies and again backed up to be a distant fourth making her seasonal debut in the GIII Beaumont S. July 10 at Keeneland.

Up in Smoke (The Big Beast) figures to benefit if the pace gets hot. Victorious in four of her first five outings, including a score in Gulfstream’s Game Face S. June 6, the gray had little chance when fourth behind a slow pace in the GIII Victory Ride S. July 4 at Belmont, but still closed strongly enough to clock her final five-sixteenths in a swift :28.95.