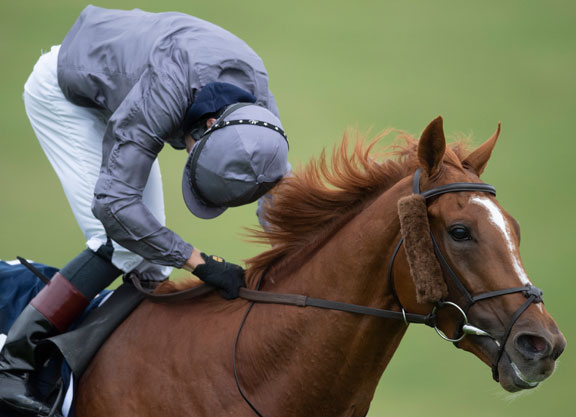 It was a clear-record eighth G1 Investec Derby at Epsom on Saturday for Aidan O’Brien, but not necessarily with the expected one as Serpentine (Ire) (Galileo {Ire}) went off on his own under Emmet McNamara and did a “Slip Anchor” to score by 5 1/2 lengths. Always clear at the head of affairs, the previous Saturday’s nine-length Curragh maiden winner was still dangerously out of reach swinging around Tattenham Corner and kept grinding to lead home a shock trifecta. Khalifa Sat (Ire) (Free Eagle {Ire}), Andrew Balding’s second string behind the fourth-placed 5-2 favourite Kameko (Kitten’s Joy), held on for second at 50-1 by a half length from Ballydoyle’s 66-1 shot Amhran Na Bhfiann (Ire) (Galileo {Ire}). Derrick Smith’s son Paul summed up the bizarre turn of events in the most bizarre of years. “When you’ve got Galileo and you’ve got Aidan, anything is possible,” he said. “They let him go and he just ran for fun. It was an incredible race to watch and once they’d left him alone I thought ‘this is going to be interesting’. Galileo is the holy one and long may it last.”

Aidan O’Brien was back at base and said, “It’s unbelievable really. He has some pedigree and we always thought he would stay well. Wayne [Lordan] won on him over a mile and a quarter at the Curragh last week and he galloped straight through the line. He went an even pace and Wayne said he couldn’t pull him up. We were happy he wasn’t going to stop and go an even pace. He wasn’t going to come back. He’s another homebred by Galileo. He always had the Derby pedigree. He took a bit of time to come last year and just had the one run. There was no doubt with his performance the last day he had to take his chance. I’m absolutely delighted for Emmet. He gave him an incredible ride, so I’m over the moon. They all run on their merits and we give them the best instructions for each horse to win the race. He stayed well and there was no point waiting with him with no pace. We are always delighted if one of them wins.”

Just over a week previously, Serpentine was a twice-raced unplaced maiden very much on the fringes of the stable’s candidates for this 241st renewal. In the opener on the Irish Derby card, the chestnut had put himself in the picture with a dynamic front-running display under Wayne Lordan and there had been a quiet word that he was fancied to outrun his odds here. For McNamara, the race was as straightforward as it gets and he was able to play Steve Cauthen in isolation as the great Kentuckian had when catching his peers by surprise in 1985. Hitting the first left-hand turn, the eventual first three home were in those positions which suggests the track was playing very much to front-runners on the day.

Much of the race was uneventful, but running downhill to Tattenham Corner Khalifa Sat was at full stride trying to stay within hailing distance of Serpentine and all the fancied horses were already struggling to make any inroads. Just as Sovereign (Ire) (Galileo {Ire}) had in last year’s G1 Irish Derby in these same grey Susan Magnier silks, Serpentine kept rolling and by the half-mile marker it was clear from McNamara’s body language that his mount was still comfortable. A furlong from home, the result was settled with the wall of favourites unable to even get past Khalifa Sat. Finishing in a heap behind the runner-up and the Rosegreen maiden Amhran Na Bhfiann, the riders of Kameko, English King (Fr) (Camelot {GB}), Mogul (GB) (Galileo {Ire}), Russian Emperor (Ire) (Galileo {Ire}) and Vatican City (Ire) (Galileo {Ire}) will perhaps be inflicting self-incriminations for letting the winner go.

According to Andrew Balding, Oisin Murphy was already castigating himself in the immediate aftermath. “Oisin is cross with himself, but I don’t know why,” the master of Kingsclere said. “Kameko ran well to a point and Oisin just felt he emptied out a little bit late on. He will certainly be dropping back in trip and that’s his last run over a mile and a half. We had to give it a go and Sheikh Fahad is a proper sportsman, so he’ll take it on the chin. I’m thrilled with Khalifa Sat, he’s a very nice horse for the future and ran a great Leger trial. Fair play to Aidan, he’s got the ammo and he knows how to use it.”

Ed Walker said of the fifth-placed English King, “The way the race panned out was frustrating, purely and simply. I am thrilled with everything–proud as punch of the horse, Frankie did well from a difficult draw. I have got no excuses, it was just a frustrating race. A Derby with no pace–there is no such thing these days, really–and we needed pace. He has hit the line hard and in another 50 yards he might have been second.”

Aidan O’Brien’s eight Derby winners have been ridden by seven different jockeys and the precedent was there for McNamara to cause an upset. “I think I got a little bit of a freebie,” commented the rider, who had gone so close on Tiger Moth (Ire) (Galileo {Ire}) in Saturday’s Irish equivalent. “I had a huge amount of confidence in the horse, having spoken to Aidan during the week. He said he was a horse that is going to stay a mile and six well, he said ‘jump, go your own tempo and just from halfway, from the six to the five, give him a breather’. He said ‘he’ll keep going’ and he was right. All I could here was the horse breathing. He was in a good rhythm, he was relaxed and I couldn’t hear a thing around me. I wasn’t sure, but I knew I was a few clear all right. It’s a bit surreal. I can’t believe it.”

Serpentine, who was beaten a total of 16 lengths when 10th of 11 on debut in a maiden over an extended mile at Galway in September and fifth at The Curragh June 12 before he turned his fortunes around so dramatically, is no surprise winner of this on pedigree at least. His dam is the Listed Victor McCalmont Memorial S. winner Remember When (Ire) (Danehill Dancer {Ire}), who was third before being latterly awarded the runner-up spot in the 2010 G1 Epsom Oaks. Her progeny are all by Galileo and are the G2 Kilboy Estate S. winner and G1 Nassau S. runner-up Wedding Vow (Ire), the G3 Blue Wind S. winner Bye Bye Baby (Ire) who was also third in the 2018 G1 Epsom Oaks, the G3 Gallinule S. scorer Beacon Rock (Ire) and the Listed Trigo S. scorer Bound (Ire).
Remember When is a three-parts-sister to the G1 Prix de l’Arc de Triomphe and G1 Irish Derby-winning champion Dylan Thomas (Ire) (Danehill), as well as being kin to the shock G1 1000 Guineas heroine Homecoming Queen (Ire) (Holy Roman Emperor {Ire}) and the G1 Cheveley Park S. heroine Queen’s Logic (Ire) (Grand Lodge), who is the second dam of the G2 Lowther S. winner Queen Kindly (GB) by Galileo’s Frankel (GB). Remember When also has an as-yet unnamed 2-year-old colt by Galileo and a yearling colt by the same sire.