Galileo's Magic Wand Gets Her Group 1 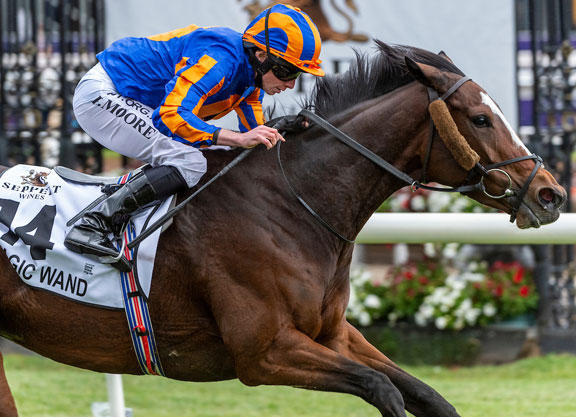 While taking in her third Group 1 in the space of 14 days, Aidan O'Brien's admirably tough 4-year-old filly Magic Wand (Ire) (Galileo {Ire}) at last got a Group 1 to her name under Ryan Moore at Flemington on Saturday when besting New Zealand superstar Melody Belle (NZ) (Commands {Aus}) by a length, with Godolphin's perennial Group 1 star Hartnell (GB) (Authorized {Ire}) back in third on his swansong (video). Magic Wand also provided her sire with his 84th Grade/Group 1 winner, which puts him level-best with Danehill.

Magic Wand made her Australian debut in the Oct. 26 G1 Cox Plate, where she was four lengths fourth to the Japanese mare Lys Gracieux (Jpn) (Heart's Cry {Jpn}), and she ventured beyond a mile and a half for the first time 10 days later when checking in 10th-albeit beaten just 3 1/2 lengths-in the two-mile G1 Melbourne Cup. She was dropping back down to 2000 metres on Saturday. Sitting about three lengths third down the side of the course behind Gailo Chop (Fr) (Deportivo {GB}) and Hartnell, Moore moved off the rail aboard Magic Wand for clear runway as they straightened. Shaken up at the 400, Magic Wand needed a full furlong to shake off a game Hartnell, but she collared her elder rival passing the 200 metre marker and was comfortably clear as Melody Belle swooped late to touch off Hartnell.

“She's a wonderful mare and [its] unfortunate she hasn't won a Group 1 before,” Moore said. “She's so tough and honest and the team have done a remarkable job with her.

“She's a high-class mare and it was her day today; Group 1s are never easy to come across. I ride for an unbelievable stable with unbelievable staff and I'm very lucky to be riding the horses.”

Magic Wand was the top lot at the 2016 Arqana August yearling sale when bringing €1.4-million from Peter and Ross Doyle, MV Magnier and Mayfair Speculators. It didn't take her long to justify that pricetag: she broke her maiden in listed company at third and six weeks later took Royal Ascot's G2 Ribblesdale S. by four lengths. She contested five consecutive Group 1s in Ireland, Britain, France and the U.S. to wrap up her 3-year-old campaign, returning fifths behind Sea of Class (Ire) (Sea The Stars {Ire}) in both the Irish and Yorkshire Oaks; seconds in the Prix Vermeille and Prix de l'Opera and a fourth in the Breeders' Cup Filly & Mare Turf. Prior to Saturday's score, Magic Wand had run 11 times in five countries this year. Second to the subsequently unbeaten Horse of the Year candidate Bricks and Mortar (Giant's Causeway) in the inaugural GI Pegasus World Cup Turf in January, Magic Wand was fifth in the G1 Dubai Sheema Classic before hitting the board in the GI Man O'War S., Listed Wolferton S. and G1 Pretty Polly S. After putting in an uncharacteristically poor effort in the G1 King George VI and Queen Elizabeth S., the bay bounced back to be second in the GI Arlington Million and G1 Irish Champion S. before her Australian sojourn.