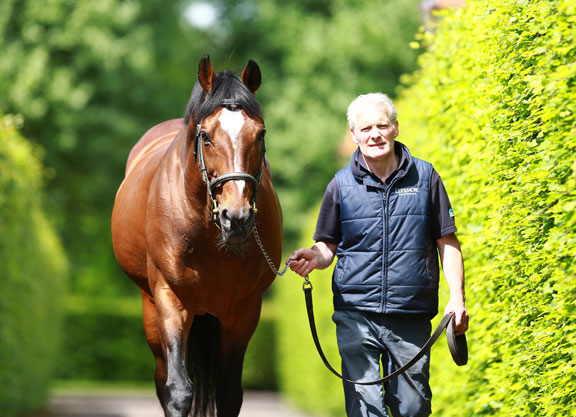 Last weekend was an extraordinary one for the great Galileo (Ire). A world-best 85th Group 1 winner with Peaceful (Ire) in the G1 Irish 1000 Guineas went along nicely with the top-level victories by his son Teofilo (Ire)'s unbeaten G1 Prix Saint Alary heroine Tawkeel (Ire), plus that of Sottsass (Fr)-out of Galileo mare Starlet's Sister (Ire)–in the G1 Prix Ganay.

When the Danehill gelding Zipping became his sire's 84th Group 1 winner in the Australian Cup at Flemington on March 13, 2010, it seemed an unsurpassable record at the time. After all, Danehill spent a lifetime covering sizeable books of mares in both hemispheres. His closest pursuer was the previous record holder Sadler's Wells, whom Danehill had overtaken in 2005. Now, 10 years on, we have a new world leader in Sadler's Wells's son Galileo, who equalled his great stud companion's feat when Magic Wand (Ire) won the LKS McKinnon S. at Flemington last year and became the clear leader following Peaceful's victory in the Irish 1000 Guineas this week.

At the time of Danehill's 84th Group 1 winner, Galileo already had four crops at the races and his total of Group 1 winners stood at just 12. And given the fact that he himself stopped shuttling to Australia after only four seasons, there were no guarantees that Galileo would get close to Danehill's total. A long successful innings was needed and thankfully Galileo has stayed healthy enough to produce large quality crops ever since. As things stand, he's managed to produce just about the same number of runners as Danehill did from his two bases. Both have been represented by about 2,100 runners and therefore have almost identical strike rates when it comes to Group 1 winners.

The pair are also extremely close when ranked by other metrics, with Danehill still holding sway with 344 stakes winners, compared to Galileo's 315, but that title will go Galileo's way too sooner rather than later. And he also eclipsed Danehill's 207 group winners earlier this year when Magic Attitude won the G3 Prix Vanteaux. The question now for Galileo is what standards he himself can set any future challenger.

Just to prove the Galileo machine is working on all fronts, his son Teofilo also got in on the action at the weekend when his unbeaten daughter Tawkeel became his 16th Group 1 winner. She was also her sire's 91st stakes winner, which moves Teofilo ever closer to 100, a score achieved by fewer than 20 European sires since the pattern began. What's remarkable about Teofilo is the 10%-plus rate at which he gets stakes winners. Any sire that can maintain 10% stakes winners or above for 10 seasons is worthy of praise. To underline the point, he's one of only eight active stallions currently above this benchmark. Moreover, he's upgrading his mares markedly.

Tawkeel, currently rated 115p by Timeform, has the potential to become his best-ever filly. G1 Irish St Leger winner Voleuse de Coeurs (Ire) is his highest-rated filly at 122, two pounds ahead of the Timeform 120-rated Group 2-winning sprinter Tantheem (Ire) who–like Tawkeel–is a Shadwell homebred. Of course, Teofilo's highest-rated son is the brilliant Exultant (Timeform 126), a five-time Group 1 winner in Hong Kong and he has two even better in Australia in Happy Clapper (Aus) and Humidor (Aus), both rated 129. Tawkeel was the 35th Group 1 winner sired by a son of Galileo, who now has seven sons with 10 or more Northern Hemisphere stakes winners. Teofilo leads the way numerically from Frankel (GB) (50) and New Approach (Ire) (43), but given normal longevity we can expect Frankel to challenge Teofilo's numbers at some point in the future.