Futurity Is the Key at The Curragh 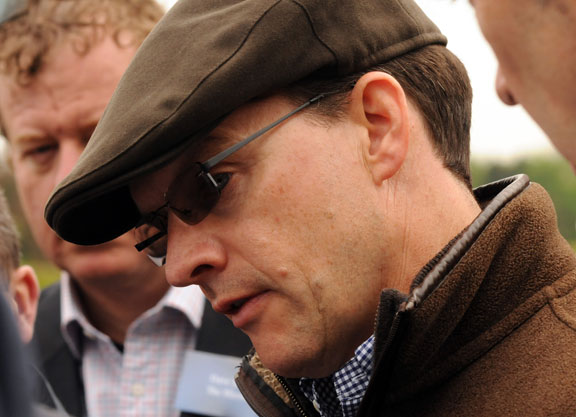 While York's Ebor Festival wraps up with its £250,000 feature handicap on Saturday, The Curragh stages the G2 Galileo Irish EBF Futurity S. and G2 A.R.M. Holding Debutante S. for the budding Classic contenders of 2021. Twelve months ago, Love (Ire) (Galileo {Ire}) was finishing fifth to Alpine Star (Ire) (Sea the Moon {Ger}) in the Debutante which underlines what these vital staging posts can play host to. While Aidan O'Brien was unable to extend his record tally of a dozen winners despite having that ammunition, the fillies' contest has been collected by his former stable luminaries Lillie Langtry (Ire) (Danehill Dancer {Ire}), Rhododendron (Ire) (Galileo {Ire}) and Magical (Ire) (Galileo {Ire}), so it is clear that he targets this with his elite. The Ballydoyle 2-year-olds have hardly shone so far this term, but the July 4 G3 Coolmore Stud Irish EBF Fillies' Sprint S. winner Mother Earth (Ire) (Zoffany {Ire}) is the pick of Seamie Heffernan as she steps up from six furlongs having finished third in the July 19 G2 Airlie Stud S. here.

Aidan's other contender Snowfall (Jpn) (Deep Impact {Jpn}) was fourth behind Donnacha's Shale (Ire) (Galileo {Ire}) and Joseph's TDN Rising Star Pretty Gorgeous (Fr) (Lawman {Fr}) in the G3 Silver Flash S. over this seven-furlong trip at Leopardstown Aug. 6 and that form could be key. One notable withdrawal from the Silver Flash was Jim Bolger's 11-length July 28 Galway maiden scorer Meala (Ire) (Epaulette {Aus) and she will pose fierce opposition to the O'Briens if in the same heart.

One domestic pattern race that Aidan does not hold the record in is the Futurity, where the late great Dr Vincent O'Brien still holds sway with his 16 renewals. Just three behind at this stage, the current master of Ballydoyle has won six of the last seven and the last four and it is significant that Heffernan sticks with the maiden Van Gogh (American Pharoah) who was a neck second to the stable's Military Style (War Front) in Leopardstown's G3 Tyros S. over this seven-furlong trip Aug. 6. Whether Van Gogh is another Giant's Causeway, Hawk Wing, Gleneagles (Ire) or Churchill (Ire) remains to be seen, but as a son of the Triple Crown hero and the operation's 2001 G1 Epsom Oaks and G1 Irish 1000 Guineas heroine Imagine (Ire) (Sadler's Wells) he is a truly special commodity.

Missing from the Tyros as Leopardstown's ground firmed up was Alpha Racing 2020's Cadillac (Ire) (Lope de Vega {Ire}), who had impressed when winning by nine lengths on debut over that course and distance July 1. This easy surface will suit ideally and Jessie Harrington could be celebrating another major win with a son of the sire after the G1 Phoenix S. success of Lucky Vega (Ire) earlier this month. “He's in great form, he's doing very well,” Harrington said. “The only reason I didn't run him at Leopardstown was because the ground was very quick that day. I took him out then, but he has been in great form since and we're hoping for a big run from him.”

At York, the G2 Sky Bet City of York S. sees Lael Stable's dual G1 Prix de la Foret heroine One Master (GB) (Fastnet Rock {Aus}) look to build on her latest success over this seven-furlong trip in the G3 Oak Tree S. at Goodwood July 31. She should be a tough nut to crack with conditions ideal, but Roger Varian could have thrown a spanner in the works by dropping San Donato (Ire) (Lope de Vega {Ire}) back in trip following his eyecatching effort when sixth in the G1 Sussex S. also at Goodwood July 29.