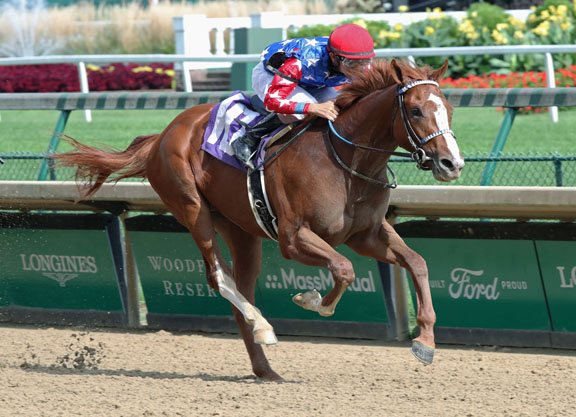 Fern Circle Stables and Three Chimneys Farm's King Fury (Curlin) is undefeated in two prior starts at Churchill Downs and tries to annex his first graded victory in Saturday's GII Kentucky Jockey Club S. A debut winner at the Louisville oval in September, the chestnut was eighth in Keeneland's GI Breeders' Futurity S. Oct. 3 before bouncing back to score in the Oct. 25 Street Sense S. Last time out, the 2-year-old finished seventh under Brian Hernandez Jr. in the GI Breeders' Cup Juvenile Nov. 6.

“He's 2-for-2 at Churchill Downs so we know he really likes it here,” said trainer Ken McPeek. “We've added blinkers to him in hopes to get him to the next level. I think they could add to his focus and really get him there. His only two blemishes came at Keeneland, so we're excited to get him back to Churchill.”

McPeek will attempt to add his second win in the Kentucky Jockey Club following Signalman in 2018.

Dale Romans offers a three-pronged attack, led by GIII Iroquois S. winner Sittin On Go (Brody's Cause). Campaigned by the Albaugh Family, the chestnut launched his career with a five-furlong win at Ellis in August before taking his route bow in the Iroquois. He was most recently ninth in the Breeders' Cup Juvenile. Running for the same connections, Smiley Sobotka (Brody's Cause) was runner-up in his career bow while negotiating 6 1/2 furlongs at Ellis in August before graduating in his route unveiling at Keeneland Oct. 4. Rounding out the Romans triumvirate is Ultimate Badger (Commissioner), who won his latest start in a optional claimer over track and trip Oct. 25.

Looking for a class break is Keepmeinmind (Laoban), on the board in all three prior starts, including a second in the Breeders' Futurity followed by a third in the Breeders' Cup Juvenile. David Cohen, aboard for the bay's first two career starts, reunites with the colt Saturday.