Home » Archive » Europe » From The Breeders At ParisLongchamp

From The Breeders At ParisLongchamp 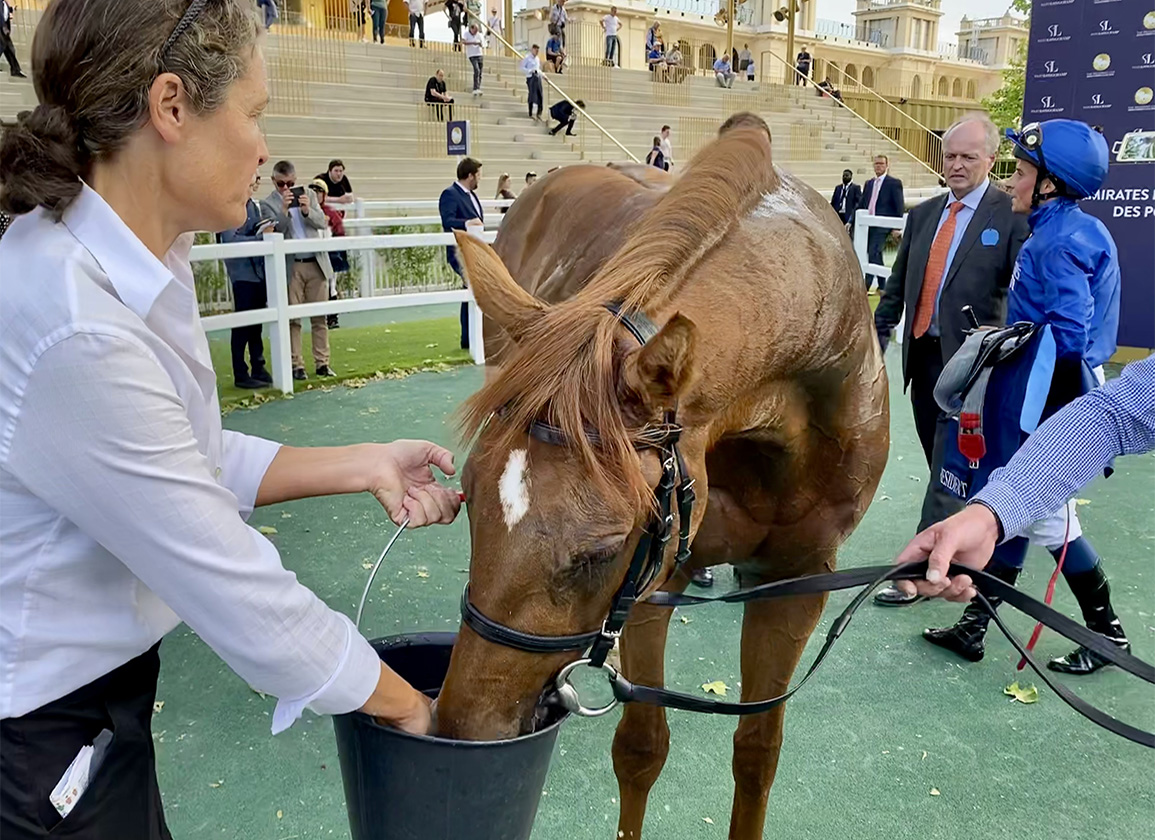 PARIS, France–When Coroebus (Ire) (Dubawi {Ire}) beat Native Trail (GB) (Oasis Dream {GB}) to give Godolphin a one-two in the QIPCO 2000 Guineas, it was the perfect finishing order for the operation as breeders, with Coroebus representing three generations of Darley/Godolphin breeding. He is also out of a mare by Teofilo (Ire) and from a family which had already given Sheikh Mohammed a dual winner of his beloved Dubai World Cup.

In Paris on Sunday, another son of the Darley lynchpin Dubawi, Modern Games (Ire), added a French Classic to his success in the GI Breeders' Cup Juvenile Turf at Del Mar. His victory in the G1 Poule d'Essai des Poulains brought the week to a resounding climax for his dam, the New Approach (Ire) mare Modern Ideals (GB). On Monday her 4-year-old son Modern News (GB) (Shamardal) won the Listed Fitzdares Royal Windsor S., followed on Saturday by the easy debut success of juvenile Mawj (Ire) (Exceed And Excel {Aus}) in a Newmarket novice contest.

Godolphin's stud director Liam O'Rourke was at Longchamp to welcome back the operation's most recent Classic victor. He said, “The family really came alive last year when this lad showed his colours, and he went on and won a Breeders' Cup and kept on improving. [Saturday] was a nice surprise as well. It didn't immediately look obvious as Mawj was the outsider of our three runners in the race, but there's nothing wrong with her. She's an Exceed And Excel and they love fast ground, and the mare is by New Approach so it's all homegrown. It's very satisfying.”

Modern Ideals, who was trained in France by Andre Fabre, ran only twice without winning, but she is a half-sister to Godolphin's former champion 2-year-old and young French-based stallion Ultra (Ire) (Manduro {Ger}), the pair being out of Epitome (Ire) (Nahswan), who was bought by Sheikh Mohammed from the late owner/breeder Gerald Leigh.

New Approach, a long-term resident of Dalham Hall Stud along with Dubawi, has already provided Godolphin with Classic winners Masar (Ire) and Dawn Approach (Ire), and he is now branching out in the sphere of broodmare sire.

O'Rourke continued, “We've invested heavily in him, he's our version of Galileo (Ire) and he's really proving his worth now as a broodmare sire.

“And what more can you say about Dubawi? This is going to be his championship year, I hope, and he is well on how way to it. It's long overdue–and take nothing away from Galileo, who has been a wonderful sire forever–but hopefully now Dubawi's time has come.”

Of Godolphin's start to the season, he added, “We have to pinch ourselves. The team in Ireland deserve huge credit because Coroebus and Modern Games are both Irish-bred, but the team across the board plays its part. We're very proud of them, they work very hard, and now the results are coming.”

There was much to enjoy in the success of Mangoustine (Fr) (Dark Angel {Ire}) in the G1 Emirates Poule d'Essai des Pouliches. A return to the big time for the classy double act of Mikel Delzangles and Gerard Mossé, and a first Classic winner for the 17-year-old Dark Angel (Ire), whose top-level success as a sire has hitherto predominantly been seen in the sprint division.

There were Classic clues in the pedigree of Mangoustine, whose dam Zotilla (Ire) (Zamindar) is a half-sister to Flotilla (Fr) (Mizzen Mast), also trained by Delzangles and the winner of this same race nine years earlier.

Mangoustine was another feather in the cap for Henri Bozo and his partners involved in Ecurie des Monceaux. In this particular case, the filly was bred by Monceaux, Qatar Bloodstock, and Lordship Stud. The latter also feature as co-breeders of the Oaks prospect Emily Upjohn (GB) (Sea The Stars {Ire}).

“It's amazing,” said Bozo, whose Ecurie des Monceaux has been responsible for such top-class names as Sottsass (Fr), Sistercharlie (Ire), Magic Wand (Ire) and Chicquita (Ire).  “She's a really good filly. She showed class at two but you never know how they will improve at three. Mikel was very confident that he had her right at home. It is fantastic to own her and have bred her in partnership–it's a good advertisement for racing.”

The Monceaux draft regularly tops the Arqana August Yearling Sale. The one in which Mangoustine appeared in 2020 was rebranded as the Deauville Select Sale when Covid forced it to be delayed by a month. Mangoustine was retained by the farm at €46,000 when failing to reach her reserve, and the team will obviously be relieved still to have her, not just because she is now a Classic winner, but also because her dam was sold later that year to Blue Diamond Stud at the Arqana December Sale for €75,000.

“But we have Mangoustine and we are so happy to have her,” said a smiling Bozo.

Blue Diamond Stud's bloodstock and media advisor Nancy Sexton reported at Longchamp that Zotilla has a “very nice” Too Darn Hot (GB) filly foal and is now in foal to Dubawi. The mare's 2-year-old colt from the first European crop of Zoustar (Aus) was bought by Sam Sangster for 35,000gns at Tattersalls last October.

Al Sagar has a potential Classic star of his own to look forward to in the coming weeks following the impressive success at Newbury on Saturday of homebred Nashwa (GB) (Frankel {GB}).