From Dust to Dust: Do “Terrible” Racetrack Barns Exacerbate EIPH? 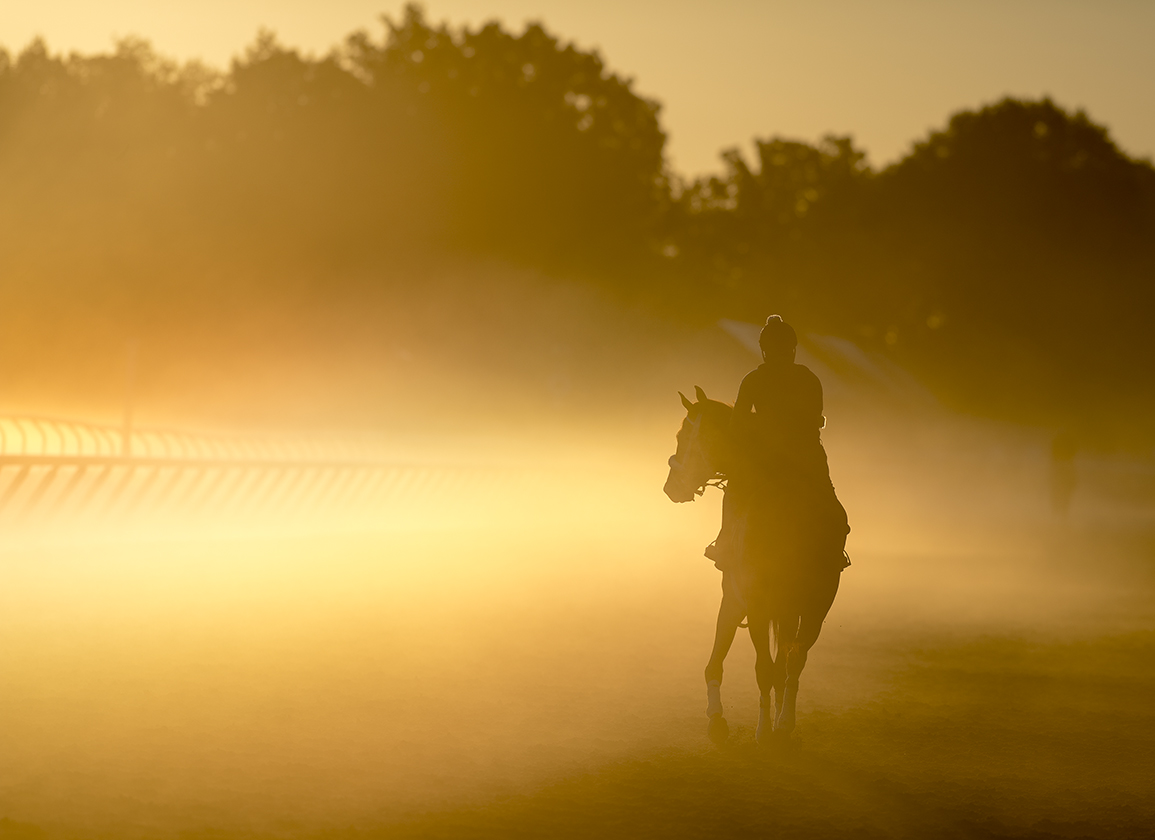 For all the satchels of research dollars and reams of ink devoted to exercise-induced pulmonary hemorrhage (EIPH), it remains a topic Swiss cheese riddled with unknowns.

Which means that, as the sport continues to move away from Lasix as a crutch to manage the problem–especially when the federal Horseracing Integrity and Safety Act (HISA) outlines a timeframe for a total race-day Lasix ban–various lines of inquiry beg pursuit.

Given the sometimes rundown, poorly ventilated state of racetrack barns around the country, perhaps the most urgent one is this: How much of an impact do these conditions have on a horse's EIPH susceptibility?

There have been efforts to find answers, however, including a recent multi-state study designed primarily to gauge the prevalence and severity of post-race EIPH in 2-year-olds.

“This is certainly the largest study of 2-year-old horses that's been conducted,” said Dr. Warwick Bayly, dean of Washington State University's College of Veterinary Medicine and the lead researcher on the study, which took in video endoscopies of 893 2-year-olds after 1,071 races at 15 American racetracks.

The results of the endoscopies–taken between 30 to 60 minutes after the race–were then sent blind to a team of three observers who assigned an EIPH score of zero (none) to four (severe) to each.

Though these results are currently being spun into a peer-reviewed paper, Bayly shared some of the preliminary data with the TDN.

As a comparison between 2-year-olds that received Lasix and those that didn't, the study “unfortunately lacked sufficient statistical power” because the bulk of the horses scoped–roughly 83%–ran Lasix free, said Bayly.

Nevertheless, despite Bayly calling the results of the 2-year-old study “pretty homogenous,” the study has generated some conclusions of interest, including how:

As has been shown in other studies, more severe EIPH is linked to poor racetrack performance. The chances of severe EIPH also increased with race distance.

Another is that as horses age and accumulate more races and workouts, the severity of EIPH worsens. “If a 6-year-old is still running in stakes races, it's because it's a darn good horse,” he said. 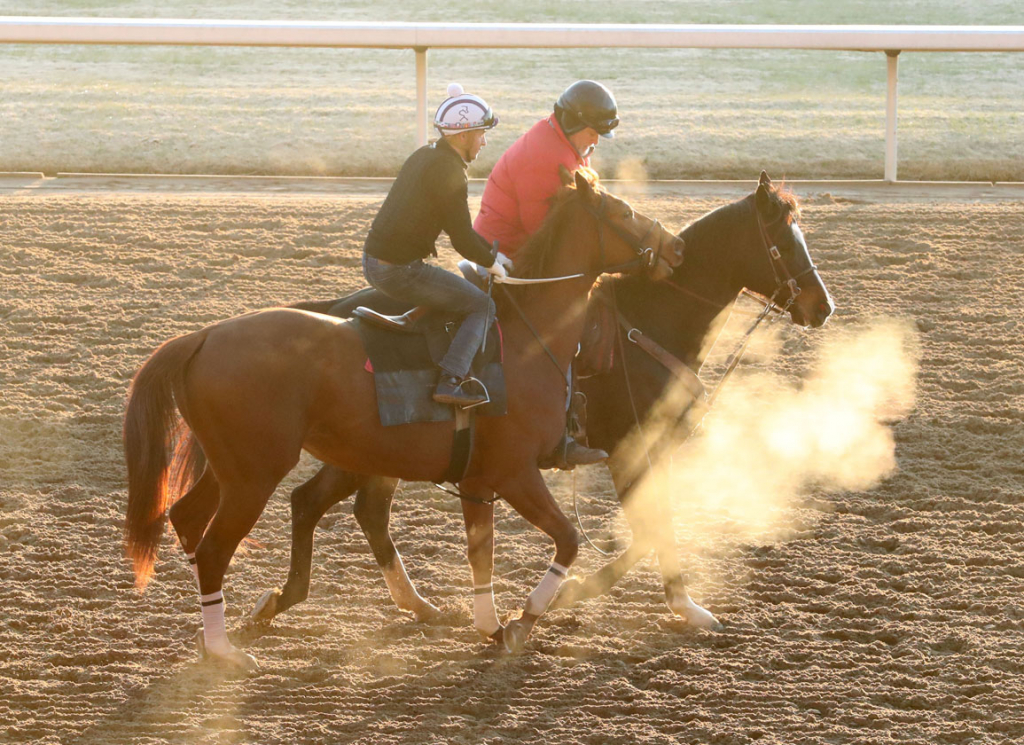 Perhaps most interestingly, an episode of moderate to severe EIPH isn't necessarily predictive of an equally bad event next time the horse runs.

“A couple of horses that had a three or a four [grade EIPH], the next time they ran, they didn't have it–they might have been a one,” said Bayly. “Horses that were a grade two, subsequently their next run afterwards might have been a two or a one or a zero.”

Most pertinent for this story, the study also sought to determine whether various environmental factors predispose a racehorse to increased likelihood of EIPH.

The researchers are hoping to look at the Air Quality Index (AQI) at each location, the horse's bedding, the material of the horse's stall (wood or metal, for example), and whether that stall opened inwards into the barn or faced outwards.

Because of the migratory nature of racing, with horses routinely shipped from track to track, Bayly described the gathering of much of this information as rather catch-as-catch-can.

“We just didn't have the resources to really delve into that and I am not sure we will find anything, although horsemen are interested in the subject,” he said.

That last observation is on the money, as some industry stakeholders argue that the relationship between a horse's environment and EIPH is already clear. 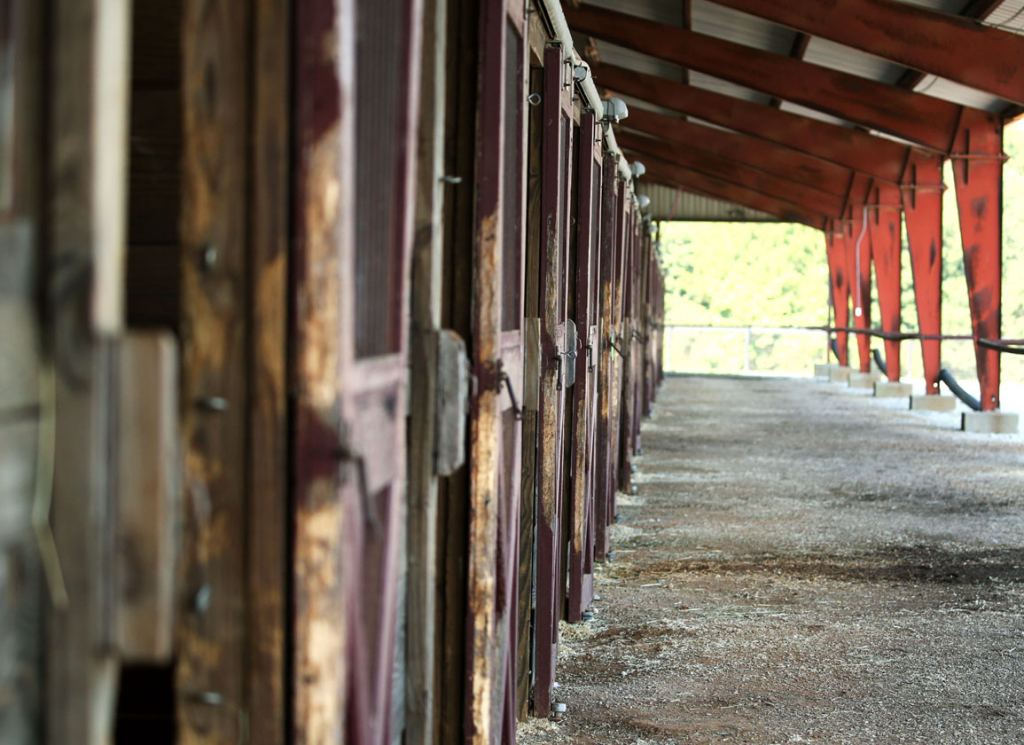 “Our stalls at our racetracks are terrible,” said Bill Casner, former trainer and co-founder of WinStar Farm.

“If trainers would only have a high understanding of the implications of a poor respiratory environment on their horses, they could really go a long way in mitigating bleeding,” he added.

For years now, Casner has been on something of a crusade to raise industry awareness of the importance of a horse's environment to its respiratory health and overall athletic performance.

“I trained racehorses in my youth, and I couldn't shake out a straw stall,” he said, in explanation of what prompted this interest. “Straw would give me a severe asthma attack. That was where I really started to become aware.”

In 2016, Casner appeared at the Welfare and Safety of the Racehorse Summit at Keeneland, extolling the virtues of stalls and shedrows free of lung-clogging dust, pathogens and mold.

His presentation included an overview of his then relatively new bespoke training barn at WinStar Farm, in Kentucky, which he designed to address what he sees as the four central pillars of lung health: ventilation, bedding, forage and contamination.

A concrete and metal shell that's easy to clean with a power-wash, the WinStar barn is tall and airy to prevent ammonia collecting in the horse's immediate breathing space. Ammonia can irritate the respiratory tract in horses.

Indeed, unlike traditional stables with a loft overhead to store hay and straw, the horses sleep beneath a ceiling full of skylights and large fans to circulate the air without dredging up dust from the floor.

Visitors to the barn won't even find rafters where birds–what Casner describes as “just another vector” for disease and bacteria–can perch.

Hay is steamed and fed to the horses on the floor. Hay nets are anathema. Shavings and wood pellets are used to bed the horses down instead of straw.

And once a week, Casner “fogs” the stalls with a novel mixture made from a cationic steroid anti-microbial (CSA) liquid diluted in five gallons of water.

Casner swears that since routinely fogging the barns with the anti-microbial mist–a mixture that kills only the bad microbes, not the good–the coughs, sniffles, spiking temperatures and skin problems that typically rampage through a barn full of youngstock with their embryonic immune systems have been all but eliminated. 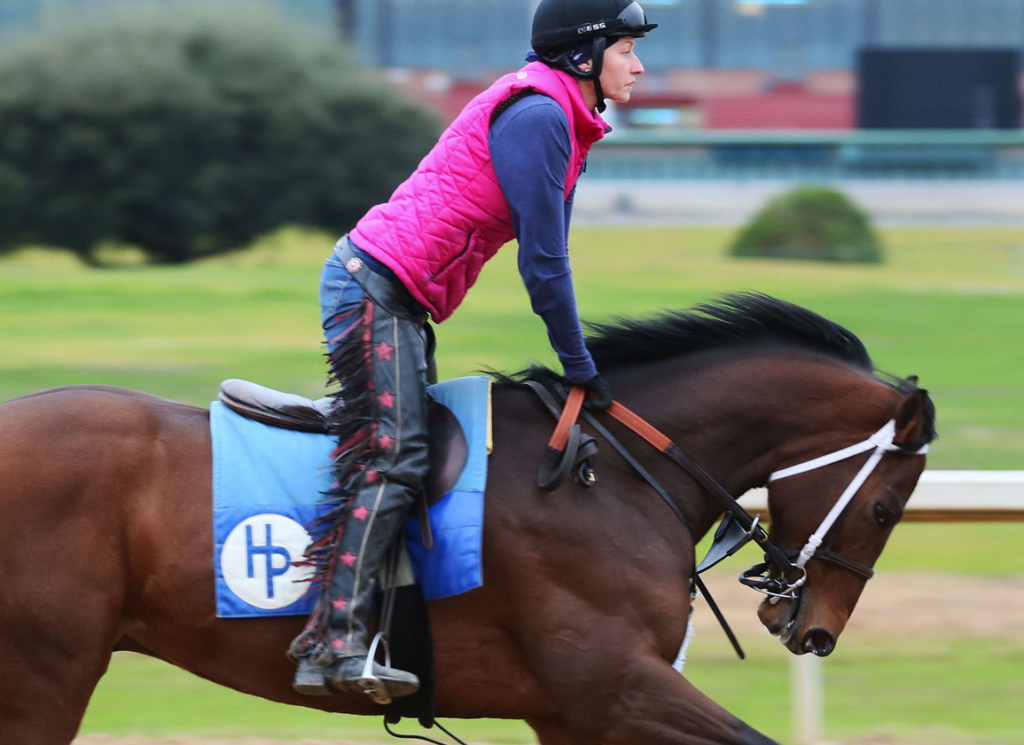 The thing is, while researchers have identified an association between EIPH and inflammatory airway disease [IAD] in horses, a scientifically proven link “has not been published,” said Dr. Laurent Couetil, a professor of large animal medicine at Purdue University whose research has focused on inflammatory respiratory disease in horses, including racehorses.

“The big picture is that EIPH is very common in racehorses, as we know, as is mild asthma,” Couetil added, using another more everyday term for inflammatory airway disease.

“To just have those two things co-exist because they are common in their own right makes sense,” he added. “So, the question truly is: Are they linked?”

The first such potential association between EIPH and airway inflammation arrived in the late 1980s with a study on horses that had raced in Hong Kong and had suffered a bleeding event.

Through subsequent necropsies, pathologists found that in the same areas of the lungs most damaged though EIPH there existed an unusual amount of localized inflammation.

Since then, published research into IAD shows that the number one villain is probably dust and particulates in the air, with much of the literature reinforcing Casner's approach to clean, well-ventilated stables, along with dampened hay fed on the ground.

“Anything that really works to reducing dust exposure, especially the small dust particles, is exactly what should be done,” Couetil said, pointing to how fine particulates can trigger airway inflammation, while larger particulates worsen it. 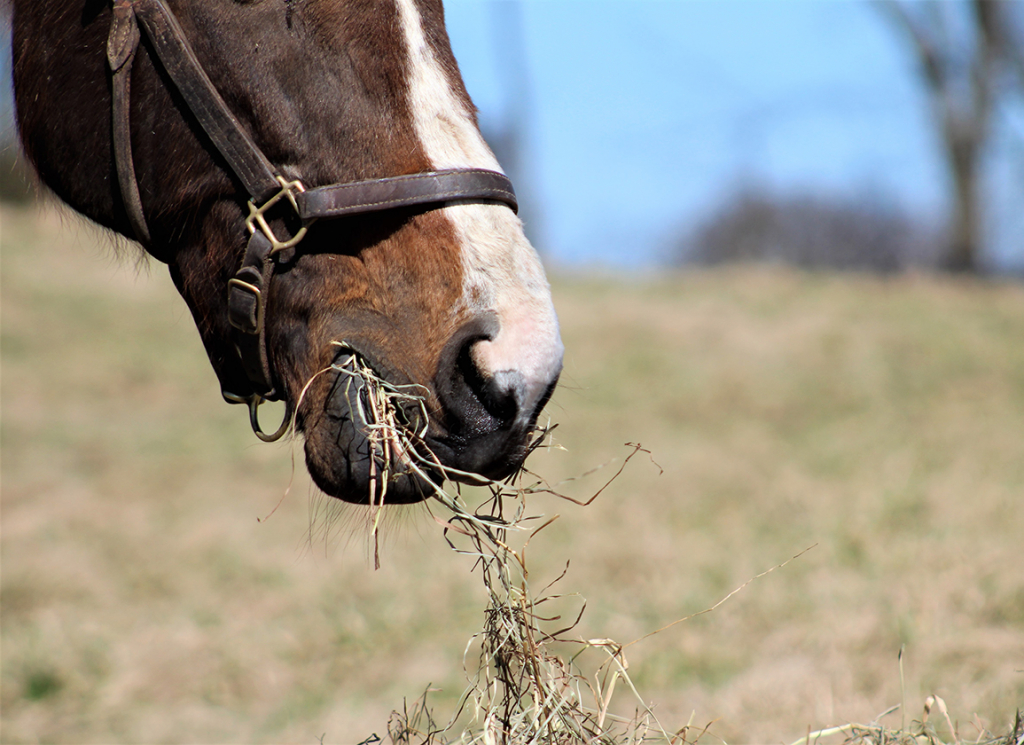 “If you think about horses and their normal environment, their habitat should be outside on the prairies, grazing,” he added.

This study, for example, compared horses fed hay in nets to those fed hay on the floor.

Not only were the hay-net fed horses exposed to more dust and particulate matter than the floor-fed horses, but their lungs appeared to have significantly greater inflammation, too.

This leads to other potential connecting threads.

Horses kept in enclosed or dusty stables are more likely to exhibit visible mucus in the trachea, this study found. And as this prior study of Thoroughbreds determined, higher levels of tracheal mucus were linked to poor racing performance.

More than 10 years ago, a team of experts looked at the air quality throughout the day in three different barns at Thistledown Race Track over the months of July, September and November.

Among the key findings:

Respiratory health isn't just an issue confined to the indoors, however.

Like Bayly with his ongoing multi-state study, researchers are looking at the potential impact that outdoor air quality might have on the equine athlete.

“I was doing some quick math and when a horse goes out to train or race, the amount of air they move in and out is similar to the rest of the day and the volume of air they breathe in when they are quiet,” said Couetil, adding that a horse's “ventilation” increases 30-fold during peak exercise.

The air surrounding inner-city tracks can be polluted with all sorts of contaminants like industrial chemicals and exhaust fumes, long-term exposures to which are known to cause severe human health issues. Are horses vulnerable to similar effects?

“If you race just a short amount of time in a polluted area, it might lead to a similar exposure to the rest of the day when they're quietly breathing in the stall,” Couetil explained. “Nobody has really looked at this–it's something that needs to be explored.”

In that vein, Couetil is involved in an ongoing two-year study to assess real-time dust exposures at four different tracks using a monitor attached to participating horses' halters. The study will simultaneously measure the pollution levels at each track.

Nevertheless, when it comes to the link most critical to horseracing–that between EIPH and inflammatory airway disease–there is “so much we don't know,” Couetil emphasized.

“We are kind of scratching the surface right now.”