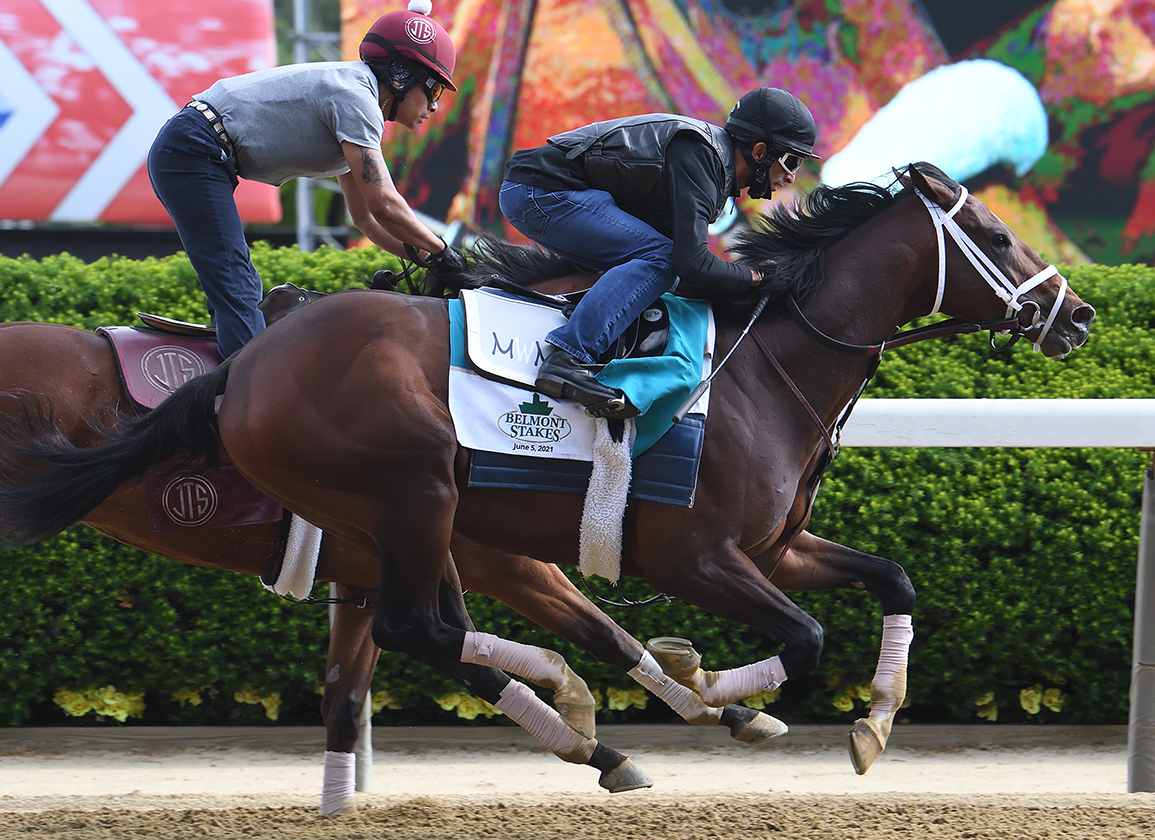 • John and Diane Fradkin's GI Preakness S. winner Rombauer (Twirling Candy) worked a half-mile in company Friday on the Belmont Park main track in preparation for the GI Belmont S. Rombauer, trained by Michael McCarthy, was clocked in :50.01 (53/86) beneath John Velazquez over the fast main track.

“I was very happy with the work,” McCarthy said. “I just wanted him to go ahead and get familiar with Johnny. It seemed like he was well in hand at all times. Johnny asked him to gallop out a little bit going underneath the wire and the horse seemed to respond nicely. I'm very happy with what I saw today.”

“We got caught in behind a couple of horses and they were kind of off the rail and spread out a bit which made it a little tricky,” Pletcher said. “In the end, Irad thought it was good. He said that Known Agenda had more of a target, jumped into the bridle and was on the muscle. He finished up and galloped out well.”

“He's a horse that at times will work like he's capable of stepping up,” Pletcher said of Bourbonic. “The one thing he does is gallop out strongly. He's always given indications that the distance would suit him.”

Pletcher added, “Overtook is historically not an overly ambitious work horse, but I thought he went well this morning. I was looking for him and Bourbonic to just show they have some decent energy. I think his two breezes since the Peter Pan have been better than what we were seeing beforehand, so I'm happy with that.”

• Rock Your World (Candy Ride {Arg}), winner of the GI Runhappy Santa Anita Derby and 17th in the Derby after getting roughed up at the start, worked five furlongs in a bullet :58.40 (1/34) at Santa Anita Friday. “It was a good work,” trainer John Sadler said. “He ships to New York tomorrow. We hope to right the ship in the Belmont.”

• Hot Rod Charlie (Oxbow), winner of the GII Louisiana Derby and third-place finisher in the Kentucky Derby, drilled five furlongs before Friday's first race at Santa Anita in 1:00.48 (5/34). Jockey Flavien Prat was aboard for the move. “Very happy with his breeze today,” trainer Doug O'Neill said. “Flavien was happy with the way he did it and that makes me happy. He had a good strong gallop going into this work and now he's got a strong work and gallop-out going into the race. We just want to stay injury-free and we're pumped up and optimistic about a week from tomorrow. This horse is getting more and more confident and he's starting to separate himself from the others.”