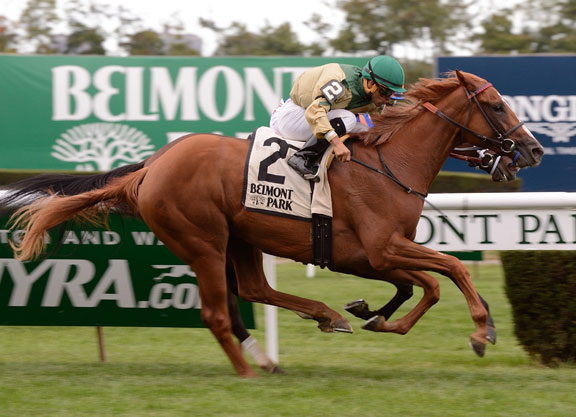 The big prize for 3-year-old grass fillies at the Keeneland fall meet has come and gone, with Time and Motion (Tapit) winning a three-horse photo in last Saturday's GI Queen Elizabeth II Challenge Cup S. There are still plenty of talented and improving sophomore turf lasses on the grounds, however, and 14 of them will line up in Friday's GIII Pin Oak Valley View S.

Morning line favoritism lies with Azaelia (Fr) (Turtle Bowl {Ire}), who graduated from allowance company into stakes waters with aplomb this spring in her native France. Owned by Peter M. Brant and Joseph Allen LLC, the bay conquered an allowance Apr. 10 at Le Bouscat before running second in the G3 Prix Vanteaux May 20 at Chantilly. She then stepped up her game further and flashed big promise when finishing fourth despite traffic trouble at 53-1 behind undefeated La Cressonniere (Le Havre {Ire}) in the G1 Prix de Diane Longines June 19.

Shug McGaughey, whose charge On Leave (War Front) finished a disappointing fourth in the QEII, will try to rebound here with My Impression (Sky Mesa). A victress in four of her seven career starts, the Stuart S. Janney III homebred most recently bounced back from a dull sixth-place effort in the GII Lake Placid S. with a dominant score in the GIII Commonwealth Oaks Sept. 24 at Laurel.

Graham Motion holds a strong pair of contenders, led by multiple graded stakes winner Tin Type Gal (Tapit). The chestnut My Meadowview homebred, who boasts victories in the GIII Miss Grillo S. and GIII Boiling Springs S., comes in off a third-place finish when trying to close into a slow pace in the GII Sands Point S. Sept. 17 at Belmont. Motion also starts Quidura (GB) Dubawi (Ire), a lightly-raced filly for Gestut Faerhof who scored in her stateside debut Sept. 18 at Belmont with a field-best 92 Beyer. Sassy Little Lila (Artie Schiller) is dangerous if she draws in off the also-eligible list. The Brad Cox trainee crushed a field of maidens in the Saratoga meet finale Sept. 5.