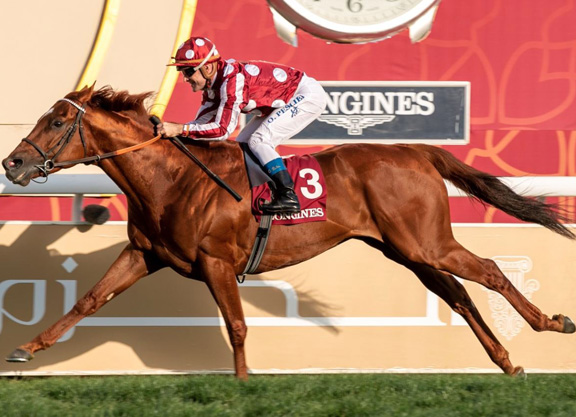 Locally owned, but French-based French King (GB) (French Fifteen {Fr}) was given a perfect ride from the front by Olivier Peslier and proved not for catching, successfully defending his title in the US$1-million HH The Amir Trophy Saturday at Al Rayyan Racecourse in Doha. American import Standard Deviation (Curlin) rallied from midpack to be an excellent second, while Pedro Cara (Fr) (Pedro the Great) backed up his last-out Qatar Derby success with a running-on third-place effort.

Away beautifully from gate one, the clean chestnut entire headed off his rivals banking into the stretch for the first time traveling comfortably as they raced under the wire with a lap to travel. French King switched off through the middle stages and Peslier gradually began to up the tempo nearing the entrance to the second turn, putting a bit of daylight on the rest of the field. Asked for a kick off the final corner, French King responded in kind, opened an unassailable advantage and held sway for the victory. Standard Deviation, a latest third for Chad Brown in the GI Hollywood Derby, raced in and amongst rivals in centerfield and got home well once into the clear, outfinishing Pedro Cara for second money.

French King went on to prove that his 2019 Amir Trophy was no one-off, validating favouritism in a pair of German Group 2s before defeating reigning G1 Dubai Sheema Classic scorer Old Persian (GB) (Dubawi {Ire}) into third in the G1 Grosser Preis von Berlin in August. He never ran a step when ninth in a soft-ground renewal of the G1 Prix de l’Arc de Triomphe in October, but he defied a near five-month absence in convincing fashion Saturday.

French King’s stakes-winning dam is a half-sister to Military Law (GB), a listed winner in the UAE who recently completed a Dubawi 1-2 behind dirt debutant Benbatl (GB) in Round 2 of the G2 Al Maktoum Challenge at Meydan. Marina Piccola is the dam of French King’s 2-year-old full-brother Mutabahi (Fr).