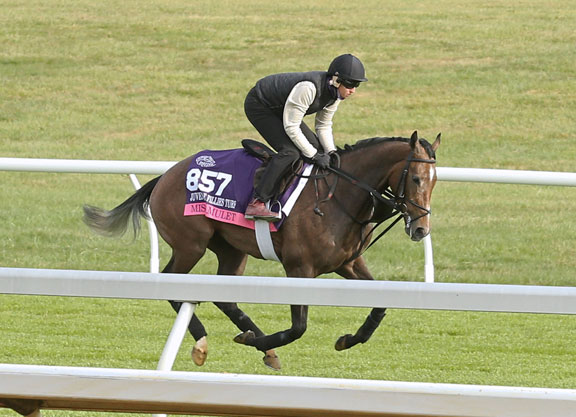 “Miss Amulet will hopefully start back in the French 1000 Guineas,” Condon said. “She'll go straight there on May 16. She had a very good year last year and kept progressing. She finished off with a third in the Breeders' Cup over a mile.

“Longchamp might be the most suitable place for her to run in a Classic. In future she may come back in trip. Hopefully she has trained on–you never really know until they run. She's done well physically, she looks well and is training nicely. All the signs are pretty good. She'll take her chance and we'll make a plan after that.”

Condon revealed that David Kelly's Thunder Beauty (Ire) (Night Of Thunder {Ire}), a Curragh maiden winner last summer before running fifth in the G1 Moyglare Stud S. and seventh in the G1 Prix Marcel Boussac, heads straight to the G1 1000 Guineas at Newmarket on May 2.

“She seems to be very well and is forward in her coat,” the trainer said. “Her fast work up to this point has gone very well. She'll take her chance in Newmarket.

“She's relatively lightly-raced. She won her maiden at The Curragh nicely and I thought she ran a lovely race in the Moyglare from an outside draw. I'd forgive her France; it was very bad ground and there was a bit of barging and scrimmaging in the straight. Billy [Lee] looked after her when her chance had gone. She'll be a big price, but she's by a nice sire and we're happy with her.”

Condon likewise has 3-year-olds Teresa Mendoza (Ire) (Territories {Ire}) and Law Of Indices (Ire) (Power {GB}) to look forward to. The Moyglare Stud S. tenth Teresa Mendoza makes her reappearance in Cork's Listed Polonia S. on May 7, while Law Of Indices may take in the G3 Lacken S. on May 16 en route to the G3 Jersey S. at Royal Ascot.