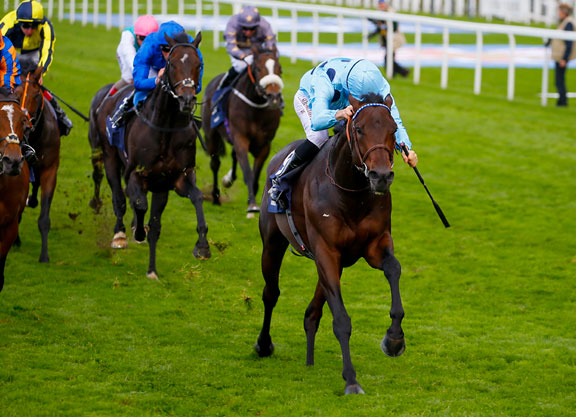 While a country's 2-year-old racing scene is not the sole indicator of its overall health, it is certainly an important one and is possibly France's weak link as it bids to remain among the superpowers. Much has been said about dwindling returns from betting and decreasing attendances at the Paris racecourses, but little on the diminishing presence of domestically-trained juveniles in the country's pattern races.

During Deauville's August meeting last season, it became evident that something was awry with poor representation and very little success in the generation's peak contests. Taking on the visiting Brits there was always going to prove difficult, but what is clear from the analysis is that French trainers were mostly unwilling even to try. Startlingly, only two home-trained runners lined up in the fixture's feature G1 Prix Morny and what was remarkable about the duo of Sexy Metro (Fr) (Diamond Green {Fr}) and Simply Striking (Fr) (Kheleyf) is that they were both colts. Unable to gain a place despite the pioneering efforts of their trainers Didier Guillemin and Mauricio Delcher Sanchez respectively, they were the first of their sex to trade at under 10-1 in the race since Mazameer (Ire) (Green Desert) in 2012.

In many ways, the Morny acts as a genuine gauge as to the quality of French-trained juveniles in recent times. Over the past five seasons, there have been just 17 domestic runners from a total of 36 and only seven of those were colts or geldings who were mainly outsiders with no pretensions of upsetting the representatives of Wesley Ward's stable or Team Ballydoyle. Of course, the elite stables perennially attempt to keep the prestige prizes at home and when the likes of Freddy Head, Jean-Claude Rouget, Andre Fabre and the now-retired Criquette Head fail why should other stables pitch in against the might of the British, Irish and now American presence? The answer to that is complex and involves the experience and confidence of the trainer, the lure of owners' premiums and a possible lack of realistic ambition to think about future stallion careers.

In the G1 Criterium International and G1 Criterium de Saint-Cloud which grace the late part of the 2-year-old campaign, Aidan O'Brien and Godolphin have been hard to subdue but in 2016 a particularly strong edition of the latter race stayed at home. That it was the legendary Andre Fabre who managed it is no surprise, especially as the colt in question was Waldgeist (GB) (Galileo {Ire}) who beat a dozen rivals. Yet of those, only one other was trained in France. It is hard to imagine the G1 Racing Post Trophy with just a couple of British-trained runners, or the G1 National S. with just that amount from Ireland, but the numerically poor attendance of France's juveniles is almost the norm now. In the 2015 Criterium International, there were also just two home-trained runners including Almanzor (Fr) (Wootton Bassett {GB}) who amazingly had just one of his seven rivals finish behind him in the affair. The case of Almanzor, who is the best colt France has boasted in recent times, is an interesting one. Started out in the provinces by Rouget, he garnered lucrative owners' premiums at La Teste De Buch and Clairefontaine before collecting the Listed Grand Criterium de Bordeaux.

Had Almanzor not been trained by Rouget, would he have even been tried in the Criterium International? While he was able to win comfortably already-valuable races with added premiums against marked inferiors, where was the pressing need to pit his wits against the pick of the O'Brien or Gosden yards? Rouget saw what he had in the son of the little-heralded Wootton Bassett and just had to try. While he failed there, he would reap rich rewards in under a year as Antonio Caro and Gerard Augustin-Normand's handsome bay swept all before him. He is a true unexpected success story for French breeding and for the enterprise of his trainer, but unfortunately he is an aberration when the overall picture is taken into account. As Alan Shuback pointed out in his post of just over a year ago entitled “Foreign Invasion Creates Troubled Times For French Racing,” it was Rouget himself who “had the gall to suggest that some races in France should be closed to foreign-trained invaders.”

Generally, the amount of French runners in the country's Group 1 races open to both sexes is just over a third of the total but interestingly the G1 Prix Marcel Boussac saw a healthier 29 of the 56 runners being home-trained in the last five years. The reason is obvious. For owners of fillies attempting to gain black-type, such contests are always a draw as the reward vastly outweighs any from prize-money or added premiums. Last year's Prix Marcel Boussac heroine Lily's Candle (Fr) (Style Vendome {Fr}), who had been an inspired purchase the evening before at the Arqana Arc Sale by Martin Schwartz for €390,000, was two months later sold for €1.1 million. Fillies from all stables vastly outnumber the colts in all of France's group races, with their connections desperate to obtain the credence that black-type bestows.

With just three contests at Group 2 level, France is already lacking in gravitas where the juvenile pattern program is concerned but closer inspection of the Criterium de Maisons-Laffitte and Prix Robert Papin (both of which are due to be run at Maisons-Laffitte for the final time in 2019 if the planned closure of the prestigious track goes ahead) reveals bigger problems. In the Criterium de Maisons-Laffitte, just 14 of the 35 runners in the last five years have been from domestic stables with only eight of them being colts or geldings. The Robert Papin, which is particularly prone to successful overseas intervention, has seen just a dozen out of a total of 30 runners take on the raiders. Only six of those were colts or geldings, with good old Sexy Metro and Simply Striking popping up again last term. If the French trainers had talented sprinting juvenile colts during the summer, it is clear that they were reluctant to expose them against the possibly more precocious British and Irish contingent often already hardened by the Royal Ascot experience.

Moderate representation of 2-year-old colts also manifests itself in the Group 3 races of the last five years, such as the fast Prix d'Arenberg in which there have been just 10 home-trained runners of that sex. In 2017, the Christophe Ferland-trained Rimini (Fr) (Elusive City) managed a 109-10 upset against the fillies and international interlopers and he is one of just 19 French-trained colts to win a pattern race at home during the last five seasons. That is less than 30% of the country's main juvenile prizes being won by potential stallion prospects, with most of the wins coming in the longer-distance tests traditionally framed for colts such as the G3 Prix la Rochette, G3 Prix des Chenes, G3 Prix Thomas Bryon and G1 Criterium de Saint-Cloud. As far as the speedier pattern-race contests are concerned, there is a definite void for home-trained colts with only the aforementioned Rimini and Goken (Fr) (Kendargent {Fr}) managing to win one in the last five seasons. Of those, the latter has earned a place at stud at Haras de Colleville through his subsequent exploits after first advertising his wares in the G3 Prix du Bois.

In Part 2, we will talk to industry figures and trainers regarding their thoughts on this issue.