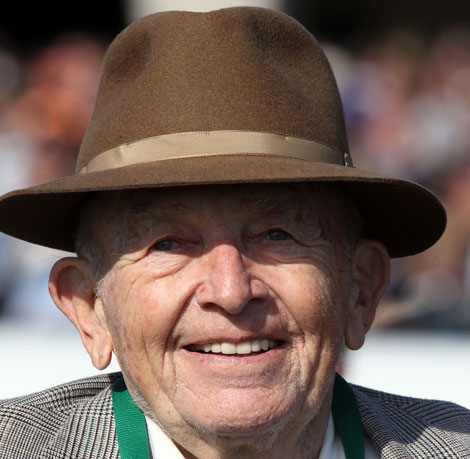 Fred Bradley, who bred and raced the likes of two-time champion female sprinter Groupie Doll (Bowman's Band) and the popular gelding Brass Hat (Prized), passed away May 20 in Whitmore, Kentucky. He was 85 years of age.

The father of trainer William “Buff” Bradley, with whom he raced Groupie Doll in partnership, Fred Bradley was a retired Air Force general, attorney and Kentucky state senator. In 1997, Bradley signed for the Silver Deputy mare Deputy Doll, going to $25,000 at that year's Keeneland September sale. The mare's fourth and final produce became Groupie Doll, who shot to national prominence as a 4-year-old in 2012, winning the GI Vinery Madison S. and the GI Humana Distaff S. before closing out a dominating season with a comprehensive victory in the GI Breeders' Cup Filly & Mare Sprint. She successfully defended her title in 2013, was sold for $3.1 million at the Keeneland November Sale a few days later and is now one of the stars of the broodmare band at Mandy Pope's Whisper Hill Farm.

Twelve months before acquiring Deputy Doll, Bradley needed just $5,000 to purchase Brassy (Dixie Brass) at the September sale and it was her second foal that paid that bill and then some. Brass Hat, who broke his maiden in stakes company as a 3-year-old, became a six-time graded-stakes winner over the course of a 40-start career, highlighted by a sloppy-track score in the 2006 GI Donn H. Also a multiple graded winner and twice Grade I-placed on the turf, Brass Hat retired with earnings of nearly $2.2 million, a total that would have been much higher but for a disputed drug positive that cost Brass Hat second-place money in the 2006 G1 Dubai World Cup.

Funeral and memorial services are pending.