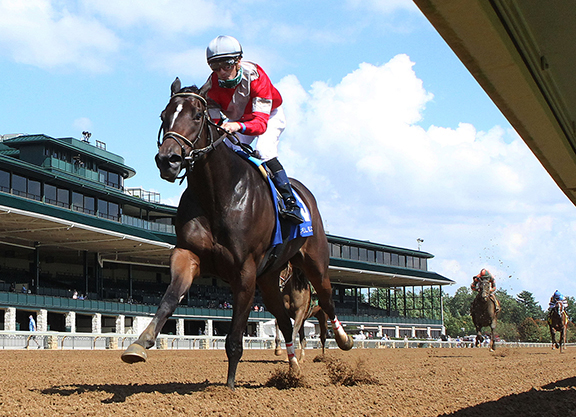 Hammered into heavy favoritism with a recency edge over the come-backing 'TDN Rising Star' Wicked Whisper (Liam's Map), Whitham Thoroughbreds's Four Graces proved the easy winner of Friday's GIII Beaumont S., stopping the clock in a stakes and track-record clocking of 1:24.90 for the extended seven-furlong distance.

Ridden for speed by Julien Leparoux over a track that had been playing kindly to front-end types, the homebred half-sister to McCraken (Ghostzapper) set a pressured pace from last year's GI Frizette S. winner Wicked Whisper, as they whistled through an opening half-mile in :44.37. Four Graces stiff-armed the challenge of Wicked Whisper, having won the battle, and managed to win the war as well, coming home well clear of Sconsin. Brereton C. Jones's Turtle Trax completed the trifecta for stallions who stood/stand at Jones's Airdrie Stud. The aforementioned McCraken also stands at Airdrie.

“She's a fast filly,” Leparoux said. “The track is pretty quick today too. But she was doing it very nicely for me in a good rhythm. That's the way she likes to run–free–and she makes that big kick at the end… I'm surprised we broke the track record, really. But she's getting much better right now and she's doing very good.”

Four Graces was registering her second straight graded win, having posted a 2 1/2-length victory in the GIII Dogwood S. at Churchill June 6. She was a debut winner at Gulfstream Mar. 1, but settled for fourth attempting a one-turn mile there Apr. 10. She bounced back with a Churchill optional claiming tally over a strong group that included Sconsin, subsequent GIII Iowa Oaks runner-up Aurelia Garland (Constitution), and two other next-out allowance winners.

Trainer Ian Wilkes, who saddled the first and third home, said the winner would likely be aimed for next month's GI Longines Test S. at Saratoga.

Pedigree Notes:
Majesticperfection, now standing in Uruguay after beginning his career in Kentucky at Airdrie, will be represented Saturday at Keeneland by Bret Jones-bred MGSW Bell's the One in the GI Madison S. Four Graces is one of five winners from as many foals to race and three graded performers out of Ivory Empress, who was second in the 2010 GIII Endine S. for these same connections. Ivory Empress is out of GSW and GISP Madame Pandit, making her a half to GISW Mea Domina (Dance Brightly). She has a 2-year-old colt named Milliken (Into Mischief) who has five published breezes at Churchill Downs and produced a full-sister to 'Rising Star' McCraken Mar. 31.