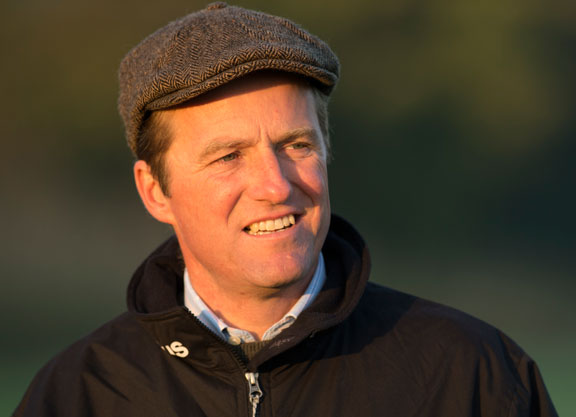 Thursday’s edition of the G2 DFS Park Hill S., or “Fillies’s St Leger” as it colloquially known, at Doncaster has a below-average feel and it could be that it is open to an improver with Qatar Racing’s Melodic Motion (Ire) (Nathaniel {Ire}) fitting the bill. Third when the re-opposing Dubka (GB) (Dubawi {Ire}), Natural Scenery (GB) (Dubawi {Ire}) and Wild Irish Rose (Ire) (Galileo {Ire}) were second, fourth and fifth around here in the G3 Lillie Langtry S. over 14 furlongs at Goodwood Aug. 3, the half-sister to this year’s G1 Sussex S. hero Here Comes When (Ire) (Danehill Dancer {Ire}) was having her first run outside of handicap company there.

“I thought Melodic Motion ran really well at Goodwood last time,” trainer Ralph Beckett said. “I’m not blaming the ground or anything for her winning run ending that day. The only thing I would say is that the following week we then shut down and didn’t have any runners for two weeks and she was one of the last ones before that to run well.”

Al Shaqab Racing’s Aljezeera (GB) (Frankel {GB}) is another entitled to progress having run a strange race in York’s Listed Sir Henry Cecil Galtres S. Staying on late to be third in that 12-furlong contest Aug. 24, she could appreciate this step up in trip while one who is coming down from extreme distances is the May 3 G3 Sagaro S. scorer Sweet Selection (GB) (Stimulation {Ire}). Last seen finishing ninth in the Aug. 1 G2 Goodwood Cup, she has been re-routed from the G2 Doncaster Cup.

Trainer Hughie Morrison said, “We always felt the Doncaster Cup was probably the right race for her, but, with the slower ground, the fillies’s race didn’t look as strong. She’s had a bit of a break. We sent her away for a couple of weeks after she ran flat at Goodwood. I don’t think she’s really sparkled since she won the Sagaro. The Gold Cup was a very challenging race for her. We just hope for a nice run and we’d like to see her bounce back.”