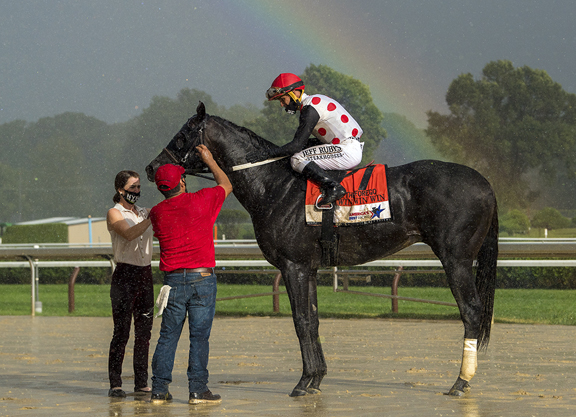 Live Oak Plantation homebred Win Win Win (Hat Trick {Jpn}–Miss Smarty Pants, by Smarty Jones), who capped his career with a head-turning last-to-first victory in Saratoga's GI Forego S. Aug. 29, will take up stud duties next year at Ocala Stud for a fee of $5,000 LFSN. He will stand as property of a partnership between Live Oak, Ocala Stud and Airdrie Stud.

“We are very excited to add Win Win Win to our roster,” said Ocala Stud's David O'Farrell. “He's a big, grand-looking horse with a lot of presence. His record-setting speed, versatility, and classic bloodline which consists of three Kentucky Derby winners give Win Win Win a great opportunity to become a top sire.”

Conditioned by Mike Trombetta, Win Win Win was a debut winner at two who took Tampa's Pasco S. by 7 1/2 lengths last January before finishing third in the GII Lambholm South Tampa Bay Derby and second in the GII Toyota Blue Grass S. After contesting both the GI Kentucky Derby and GI Preakness S., he showed off his versatility with a score in Belmont's Manila S. last July. He ran down GI Breeders' Cup Dirt Mile winner Complexity (Maclean's Music) and three other Grade I winners from what seemed like an impossible spot in this August's Forego.

“The combination of Win Win Win's tremendous talent and the opportunity he will receive at Ocala Stud is why we're so excited to partner on his stallion career,” said Airdrie Stud's Bret Jones. “No one will give this horse a better chance to succeed than Ocala Stud and we look forward to doing our part by supporting him heavily in each of his early years at stud. I know the Live Oak team has always believed he was a genuine star, and we are grateful to Mrs. Weber for letting Airdrie play a role in his exciting future.”

For more information about Win Win Win or to schedule an inspection, contact David or Joe O'Farrell at (352) 237-2171 or visit www.OcalaStud.com.