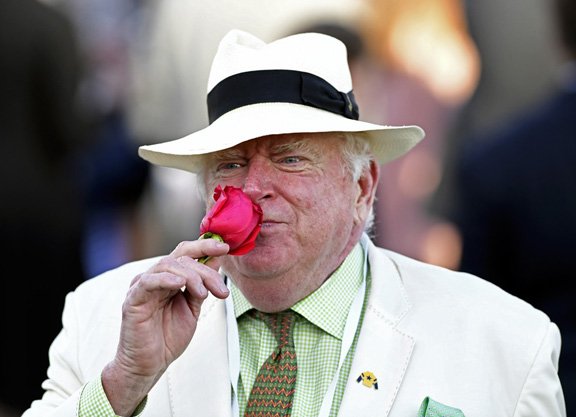 Durkin with a Derby rose | Horsephotos

Tom Durkin owns a small part of GI Kentucky Derby winner Always Dreaming (Bodemeister), something like three or four hairs on his tail.

“Minute. That would be a good way to sum it up,” he said, estimating his ownership percentage.

Minute or not, Durkin said being part of the team that owns Always Dreaming and watching the horse win the Kentucky Derby was an unforgettable thrill, better than anything he's ever experienced in his career as one of the sport's premier announcers and a small-time owner.

“I'm just looking at my own horse and nobody else's, screaming and yelling like a maniac,” he said. “I'm not even sure what came out of my mouth. It probably wasn't FCC approved. The nerves factor, yes, you get a little nervous, but not like calling the race. It's just a completely different feeling. They just don't relate on any level.”

After Durkin retired following the 2014 Saratoga meet, he decided he wanted to get involved in thoroughbred ownership, so he reached out to Terry Finley at West Point Thoroughbreds. Finley advised Durkin to buy a decent sized chunk of one horse, but he had another plan. He wanted to buy small portions of several horses. He says he's involved with six horses at the moment.

“That's a great part about fractional ownership,” Durkin said. “You get all the same thrills. I don't think I could have screamed any louder than if Always Dreaming had been 100 percent my own horse.”

The primary owners of Always Dreaming are MeB Racing, Brooklyn Boyz, Teresa Viola and St Elias Stable, which consist of the families of Vince Viola and Anthony Bonomo. This spring, they allowed Finley's West Point Stable to buy a piece of the colt, and that's when Durkin jumped on board.

Before he retired, Durkin has already been involved in standardbred ownership and was the co-owner, along with Joe Spadaro, of the trotter Coraggioso (Conway Hall). His claim to fame was a win in the $225,000 New York Sire Stakes championship at Yonkers in 2012. The real show was not on the racetrack but on the apron as Durkin whooped and hollered the entire time the field came down the stretch and tore his hat into pieces in celebration. Out of sight because he watched the Derby in the tunnel leading from the paddock to the track, Durkin said he once again ruined an expensive hat.

“I owned half of Corraggioso and there seems to be a theme; I take my very best hat and ruin it,” Durkin said. “I had my very best Borsalino panama hat on for the Derby and turned it into shreds. The same thing happened when we won at Yonkers.”

The only thing that didn't go right for Durkin on Derby Day was a scary encounter he had with Thunder Snow (Ire) (Helmet {Aus}), the colt who seemed to forget that this was the Kentucky Derby and not a rodeo.

“The race starts and I'm watching it on TV,” Durkin said. “The horses kind of thunder past and I can't really see anything. Then there's this great commotion and people are yelling, 'Get out of the way. Get out of the way.' They open up the pole on the gap that leads into the tunnel and in comes Thunder Snow with the outrider. He's crazed, and he basically pinned me up against wall of the tunnel. I am afraid of horses. I make no bones about that. He's wheeling his ass end around and then I had to push him out of the way so he doesn't kick me in the head. It was scary.”

His dealings with Thunder Snow caused him to miss about

45 seconds of the Derby and then he had a hard time locating Always Dreaming. But come the time the field hit mid-stretch, he knew where his horse was and that he would be visiting the winner's circle.

Durkin called 10 Kentucky Derbies for NBC, the last one in 2010. Though he kept calling at the NYRA tracks for four more years, he cited stress as the reason he no longer wanted to call marquee races on television. This was his first trip back to the Derby since 2010.

“All in all, I'd rather be watching without a microphone in front of me, ” he said. “The experience is completely different; other than it's the first Saturday in May, they don't even relate. When you're just watching the race, all day you're just yucking it up. Calling the race, all day I'm going over notes, fussing and worrying about what can go wrong. And then when you're done calling the race it is like a relief. I look back at pictures people took of me when I was calling and I looked like a maniac.”

It's on to the GI Preakness for Durkin and the Always Dreaming team.

He's going to need to buy a new hat.